I'm using ThreeJS in a project and noticed that older versions render wireframes differently than newer versions, and I can't figure out how to revert (which I'd prefer).

This fiddle using release 54 renders only the exterior edges of the object drawn with a wireframe material: http://jsfiddle.net/ksRyQ/ or as pictured here in case this is platform specific (I'm on mac chrome):

On the other hand, when I run the same code locally using the newer version r61 I see each polygon's edge, as in: 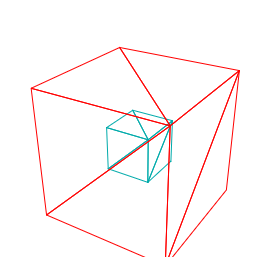 the code in both cases is simple:

I'm sure I could make the cube out of lines or something, but I'd rather actually understand the issue.

Any clues? Is there a setting for this or something that can be tweaked? Secondarily, you'll note that right now that code is using the canvas renderer, although I plan to use the webGL renderer, but the same phenomenon is true with both (even though there are other differences).

If you want to render a wireframe of a given geometry, you can now use this pattern:

Also see this related answer on how to render both a model and its wireframe.

Not the answer you're looking for? Browse other questions tagged javascript three.js or ask your own question.