How can I view any local commits I've made, that haven't yet been pushed to the remote repository? Occasionally, git status will print out that my branch is X commits ahead of origin/master, but not always.

Is this a bug with my install of Git, or am I missing something?

This gives a log of all commits between origin/master and HEAD:

When HEAD is on the master branch, this gives a log of unpushed commits.

Similarly, to view the diff:

To see all commits on all branches that have not yet been pushed:

To see the most recent commit on each branch, as well as the branch names:

Show all commits that you have locally but not upstream with:

@{u} or @{upstream} means the upstream branch of the current branch (see git rev-parse --help or git help revisions for details).

Taken from: Git: See all unpushed commits or commits that are not in another branch.

All the other answers talk about "upstream" (the branch you pull from).
But a local branch can push to a different branch than the one it pulls from.

For instance, you may want to know which commits you haven't pushed yet:

Or as a more complicated example, imagine that you normally pull changes from origin/master (which you set as your @{upstream}), and push changes to your fork (e.g., as myfork/topic).
You may push to your fork from multiple machines, requiring you to integrate the changes from the push destination, rather than upstream.
With this patch, you can just do:

rather than typing out the full name.

Just as we have "%(upstream)" to report the "@{upstream}" for each ref, this patch adds "%(push)" to match "@{push}".
It supports the same tracking format modifiers as upstream (because you may want to know, for example, which branches have commits to push).

If you want to see how many commit your local branches are ahead/behind compared to the branch you are pushing to:

I had a commit done previously, not pushed to any branch, nor remote nor local. Just the commit. Nothing from other answers worked for me, but with:

There I found my commit.

What this basically does:

I know it is not a pure command line option but if you have it installed and are on a GUI system it's a great way to see exactly what you are looking for plus a whole lot more.

(I'm actually kind of surprised no one mentioned it so far.)

git branch -v will show, for each local branch, whether it's "ahead" or not.

I believe the most typical way of doing this is to run something like:

However, I personally prefer running:

which shows the commits from all branches which are not merged upstream, plus the last commit in upstream (which shows up as a root node for all the other commits). I use it so often that I have created alias noup for it.

I suggest you go see the script https://github.com/badele/gitcheck, i have coded this script for check in one pass all your git repositories, and it show who has not commited and who has not pushed/pulled. 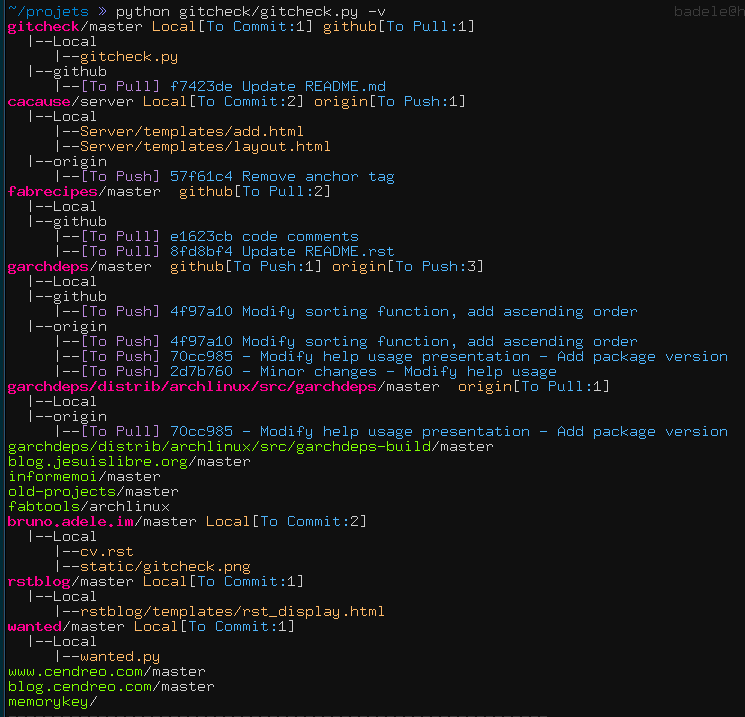 It is not a bug. What you probably seeing is git status after a failed auto-merge where the changes from the remote are fetched but not yet merged.

To see the commits between local repo and remote do this:

This is 100% safe and will not mock up your working copy. If there were changes git status wil show X commits ahead of origin/master.

You can now show log of commits that are in the remote but not in the local:

This worked better for me:

There is tool named unpushed that scans all Git, Mercurial and Subversion repos in specified working directory and shows list of ucommited files and unpushed commits. Installation is simple under Linux:

Usage is simple too:

See unpushed --help or official description for more information. It also has a cronjob script unpushed-notify for on-screen notification of uncommited and unpushed changes.

To list all unpushed commit in all branches easily you can use this command:

If the number of commits that have not been pushed out is a single-digit number, which it often is, the easiest way is:

git responds by telling you that you are "ahead N commits" relative your origin. So now just keep that number in mind when viewing logs. If you're "ahead by 3 commits", the top 3 commits in the history are still private.

Those can be suspect but I recommend the answer by cxreg

one way of doing things is to list commits that are available on one branch but not another.

I'm really late to the party, and I'm not sure when it was implemented, but to see what a git push would do, just use the --dry-run option:

But if you are using git gui

If you have git submodules...

I am using the following bash script to check all of that:

Here's my portable solution (shell script which works on Windows too without additional install) which shows the differences from origin for all branches: git-fetch-log

Parameters passed for log, e.g. --oneline or --patch can be used.

will show all the diffs in your local commits.

will show the local commit id and the name of commit.

Assuming your branch is set up to track the origin, then that should show you the differences.

Will give you a summary of the commits.

Not the answer you're looking for? Browse other questions tagged git git-diff git-log or ask your own question.

354
List Git commits not pushed to the origin yet
22
Your branch is ahead of 'origin/master' by X commits. How to find the X commits?
28
How do I see my local unpushed commits?
1
GIT - How to see Commits that I've made
-1
How to see locally committed messages, but not pushed into git
1
Git: how to identify what changed?
1
Check whether a repository would be pushed in a shell script
2699
How do I install pip on Windows?
340
Test if a command outputs an empty string
283
In GitHub, is there a way to see all (recent) commits on all branches?
See more linked questions

7653
How to modify existing, unpushed commit messages?
13302
What is the difference between 'git pull' and 'git fetch'?
24625
How do I undo the most recent local commits in Git?
6055
Move the most recent commit(s) to a new branch with Git
19425
How do I delete a Git branch locally and remotely?
4628
Undo a Git merge that hasn't been pushed yet
1952
Make the current Git branch a master branch
2043
Throw away local commits in Git
10641
How do I rename a local Git branch?
1842
Remove tracking branches no longer on remote