Why does a recursive call cause StackOverflow at different stack depths?

I was trying to figure out hands-on how tail calls are handled by the C# compiler.

(Answer: They're not. But the 64bit JIT(s) WILL do TCE (tail call elimination). Restrictions apply.)

So I wrote a small test using a recursive call that prints how many times it gets called before the StackOverflowException kills the process.

Right on cue, the program ends with SO Exception on any of:

Conversely, using 'Optimize build' ON + (Target = x64 or AnyCPU with 'Prefer 32bit' OFF (on a 64bit CPU)), TCE happens and the counter keeps spinning up forever (ok, it arguably spins down each time its value overflows).

But I noticed a behaviour I can't explain in the StackOverflowException case: it never (?) happens at exactly the same stack depth. Here are the outputs of a few 32-bit runs, Release build:

The stack size is constant (defaults to 1 MB). The stack frames' sizes are constant.

So then, what can account for the (sometimes non-trivial) variation of stack depth when the StackOverflowException hits?

So I simplified the code to this:

I ran it in Release/32bit/Optimization ON without a debugger. When the program crashes, I attach the debugger and check the value of the counter.

And it still isn't the same on several runs. (Or my test is flawed.)

As suggested by fejesjoco, I looked into ASLR (Address space layout randomization).

It's a security technique that makes it hard for buffer overflow attacks to find the precise location of (e.g.) specific system calls, by randomizing various things in the process address space, including the stack position and, apparently, its size.

The theory sounds good. Let's put it into practice!

In order to test this, I used a Microsoft tool specific for the task: EMET or The Enhanced Mitigation Experience Toolkit. It allows setting the ASLR flag (and a lot more) on a system- or process-level.
(There is also a system-wide, registry hacking alternative that I didn't try) 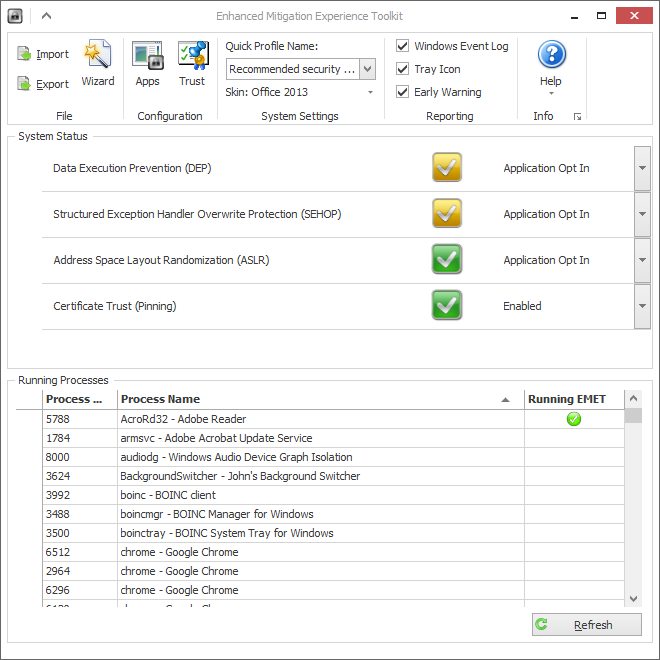 In order to verify the effectiveness of the tool, I also discovered that Process Explorer duly reports the status of the ASLR flag in the 'Properties' page of the process. Never saw that until today :) 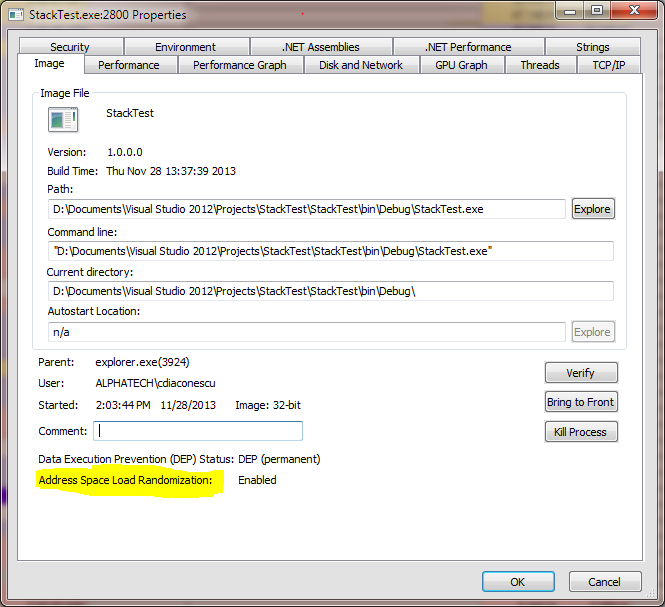 Theoretically, EMET can (re)set the ASLR flag for a single process. In practice, it didn't seem to change anything (see above image).

However, I disabled ASLR for the entire system and (one reboot later) I could finally verify that indeed, the SO exception now always happens at the same stack depth.

ASLR-related, in older news: How Chrome got pwned

I think it may be ASLR at work. You can turn off DEP to test this theory.

By the way, with this tool, I found that the difference between the maximum and minimum stack size is around 2 KiB, which is half a page. That's weird.

Update: OK, now I know I'm right. I followed up on the half-page theory, and found this doc that examines the ASLR implementation in Windows: http://www.symantec.com/avcenter/reference/Address_Space_Layout_Randomization.pdf

Once the stack has been placed, the initial stack pointer is further randomized by a random decremental amount. The initial offset is selected to be up to half a page (2,048 bytes)

And this is the answer to your question. ASLR takes away between 0 and 2048 bytes of your initial stack randomly.

This C++11 code prints the offset of the stack within the start page:

The issue here is that randomizing the thread stack's starting address within a page doesn't make sense from a security standpoint. The issue is simply that when you have a 64 bit system with 47 bit userspace (on newer Intel-CPUs you even have 55 bit userspace) you have still 35 bits to randomize, i.e. about 34 billion placements of a stack. And it doesn't make sense from a performance standpoint either since cacheline aliasing on SMT-systems can't happen because caches have enough associativity today.

1
Variable stack size on stack overflow exception
235
What is the purpose of the "Prefer 32-bit" setting in Visual Studio and how does it actually work?
123
Why doesn't .NET/C# optimize for tail-call recursion?
44
Checking available stack size in C
32
How do you disable ASLR (address space layout randomization) on Windows 7 x64?
5
How can I determine (or at least guestimate) the stack frame size of a recursive method?
2
.NET StackOverflow exceptions more likely on one PC

552
Why does C# forbid generic attribute types?
6
Why ExecuteCodeWithGuaranteedCleanup doesn't work?
472
Why does Math.Round(2.5) return 2 instead of 3?
588
"The breakpoint will not currently be hit. The source code is different from the original version." What does this mean?
6
How do I enable DEP or ASLR for my .NET application?
467
If strings are immutable in .NET, then why does Substring take O(n) time?
10
How does the well-known "Process is terminated due to StackOverflowException" screen appear?
0
DNX causing StackOverflowException?
0
Prevent ' Process is terminated due to StackOverflowException' in C#
0
c#/vb Stack Overflow Exception on relatively small call stack