I'm getting a rather strange error, which seems to have started when I updated several NUGET packages (including to MVC 5). In my "_Layout.cshtml" file, I now get the error messages that you can see in this picture (sorry, I'm too new to post it directly here yet). 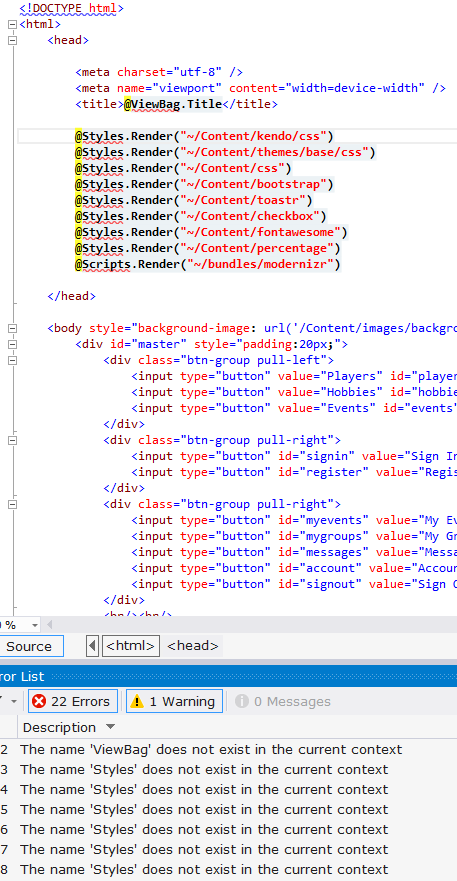 These are listed as errors, not warnings. Yet my build succeeds and the project runs, and as far as I can tell it works fine. I only see these errors when I have the "_Layout.cshtml" file open. It's acting as though it can't see "System.Web.Optimization". However, if I hover over the line, it will prompt me to insert that text and make it say:

But I never had to explicitly spell this out before, and if I start a new project it doesn't require me to do so. Obviously, some part of my updates has caused this strange behavior (I assume it's related to a config setting somewhere, but I can't figure out what or where). I've checked both config files (the "project" one and the "views" one), and I'm pretty sure the issue must be there, but it's beyond my ability to see the problem. If this were a normal "class" file, it would be obvious that I was missing a "using" statement at the top, but that doesn't seem to apply here.

Can anyone point me to a solution, other than explicitly pointing to the full reference in the code as mentioned above? That just doesn't seem like it should be necessary, and I feel like I'd be skirting the issue by doing so.

The most likely cause of this issue is that the web.config in your Views folder(s) is/are broken. Upgrading the ASP.NET MVC 5 requires quite a few configuration changes that I am not certain the NuGet package manager does (or does well, I think it takes care of a few of these). Along with the MVC 5 .dll, many of the other related assemblies also need to be updated and the related references updated as well.

Take a look at the following tutorial and ensure you have completed EACH of the required steps. Then do a clean, rebuild and see if your issues are resolved.

I have found that it is sometimes better to have VS create a new MVC project, then look at and compare the web.configs (both application root as well as the views folder web.config) that it generates to your project's configuration files to ensure that you are not including namespaces that don't belong and all version numbers are correct.

Looks like VS *.cshtml editor marks the error erronously (although the compiler can resolve the reference).

I upgraded an MVC3 project to MVC5 by creating a basic MVC5 project and copying key pieces of BOTH Web.Configs over. (in addition to upgrading the Nuget packages as you've done.)

From Web.Config in project root:

From Web.Config in Views/:

You should take note that the final namespace add in system.web.webPages.razor is the name of the Project - in this case my empty project was named simply, "MVC5." You'll want to change that name to match your project's.

Combined by the answers above what solved the issue for me in Visual Studio 2015 was just adding:

All of these were already in place in Visual Studio 2017 - the only way I could get this to work using Visual Basic was to include this in the view:

Not the answer you're looking for? Browse other questions tagged c# asp.net-mvc visual-studio-2012 asp.net-mvc-5 or ask your own question.

561
Compile Views in ASP.NET MVC
1166
.gitignore for Visual Studio Projects and Solutions
444
Is there a format code shortcut for Visual Studio?
636
Writing to output window of Visual Studio
583
How to disable all caps menu titles in Visual Studio
536
Error 'LINK : fatal error LNK1123: failure during conversion to COFF: file invalid or corrupt' after installing Visual Studio 2012 Release Preview
516
Visual Studio debugging/loading very slow
499
ReSharper “Cannot resolve symbol” even when project builds
360
Visual Studio “Could not copy” … during build
1459
Why not inherit from List<T>?