Does Android support JDK 6 or 7 [duplicate]

I am new to Android development. Can I use my existing Java code developed using JDK 7 in Android?

The functions use xerces dom and xslt and xpathapi. Currently when I installed Android Eclipse ADT environment these functions are not compiling. I would also like to know whether an Android device itself supports JRE 6 or 7?

Originally Android development tools supported only jdk 6 features. But that was changed, first by Android Studio 0.3.2 in October 2013 see: http://tools.android.com/recent/androidstudio032released

Support for language features like the diamond operator, multi-catch, try-with-resources, strings in switches, etc. When creating a new project, you can specify a source language level: 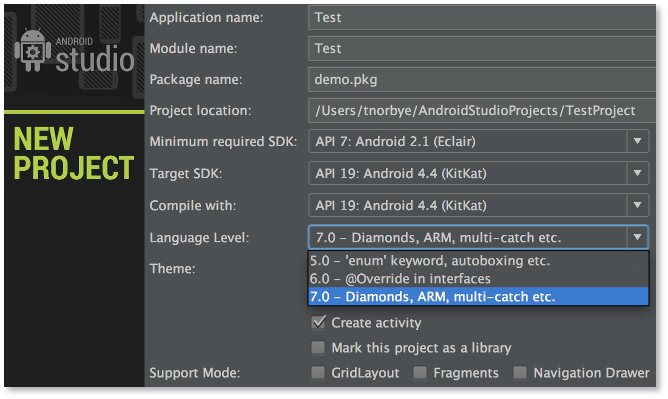 then by ADT plugin 22.6 in March 2014,see: http://developer.android.com/tools/sdk/eclipse-adt.html

Android is not intended to be 100% compatible with any Java SE API version, not 6 nor 8 nor any. this was the reason of the court case of Oracle raised Against Google, accusing Google of fragmenting Java. Some APIs are impossible to implement on android as Swing; Imagine a window with a close button on android ! Others were delayed but implemented : for e.g.: Charset class is in Java SE 1.4 but implemented in android API 9, AutoClosable in Java 7 implemented in Android API level 19 to allow implementation of try-with-resources language feature. Some APIs are existent but for different purpose as Console.

Firstly, there is a difference between the Java JDK and the JRE. The JRE is the Java Runtime Environment while the JDK is the Java Development Kit. It is the JDK that you need for Android application development along with the existing Android SDK.

The Android SDK can use either JDK 6 or 7, however, it can ONLY use the JDK 6 API.

does android plan to support java 7

Not the answer you're looking for? Browse other questions tagged android java-7 jdk6 or ask your own question.

8
diamond operator is not supported
3277
Iterate through a HashMap
177
How to set -source 1.7 in Android Studio and Gradle
189
Java 7 language features with Android
61
Can the Android SDK work with JDK 1.7?
10
How to properly close a cursor in android
24
try-with-resources are not supported at this language level - Android
8
How to use java.nio.file package in android?
7
Why Kotlin plugin adds kotlin-stdlib-jre7 (not kotlin-stdlib) reference for Android project
7
Scala 2.12 uses Java 1.8; what should we do if we are unable to upgrade to Java 1.8?
see more linked questions…