For some reason, the installer says "Setup Blocked" with an error "This version of Visual Studio requires a computer with a newer version of Windows". 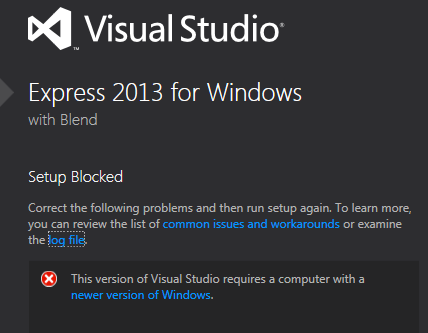 This error is not exactly descriptive of what's wrong. The least I could do was verify that I have the following installed :

Executed the installer with the /log winexp.log argument and got the following : winexp.log.

Any ideas of what else could be the problem ?

Edit : by looking at this question there was a crack that allowed installing Windows Phone's SDK on Windows 7 - does anyone know a similar solution for VS 2013 ?

The minimum requirements are based on the Express edition you're attempting to install:

It sounds like you're trying to install the "Express 2013 for Windows" edition, which is for developing Windows 8 "Modern UI" apps, or the Windows Phone edition.

Visual Studio Express for Windows needs Windows 8.1. Having a look at the requirements page you might want to try the Web or Windows Desktop version which are able to run under Windows 7.

Additional Requirements for the laptop:

And don't forget to reboot after updating your windows

Description
If the only block to be reported is “Reboot Pending,” the returned value is the Incomplete-Reboot Required value (0x80048bc7).

Not the answer you're looking for? Browse other questions tagged windows-phone-8 installation visual-studio-2013 windows-7-x64 or ask your own question.