How exactly does __attribute__((constructor)) work?

It seems pretty clear that it is supposed to set things up.

So, the way the constructors and destructors work is that the shared object file contains special sections (.ctors and .dtors on ELF) which contain references to the functions marked with the constructor and destructor attributes, respectively. When the library is loaded/unloaded the dynamic loader program (ld.so or somesuch) checks whether such sections exist, and if so, calls the functions referenced therein.

Come to think of it, there is probably some similar magic in the normal static linker so that the same code is run on startup/shutdown regardless if the user chooses static or dynamic linking.

.init/.fini isn't deprecated. It's still part of the the ELF standard and I'd dare say it will be forever. Code in .init/.fini is run by the loader/runtime-linker when code is loaded/unloaded. I.e. on each ELF load (for example a shared library) code in .init will be run. It's still possible to use that mechanism to achieve about the same thing as with __attribute__((constructor))/((destructor)). It's old-school but it has some benefits.

.ctors/.dtors mechanism for example require support by system-rtl/loader/linker-script. This is far from certain to be available on all systems, for example deeply embedded systems where code executes on bare metal. I.e. even if __attribute__((constructor))/((destructor)) is supported by GCC, it's not certain it will run as it's up to the linker to organize it and to the loader (or in some cases, boot-code) to run it. To use .init/.fini instead, the easiest way is to use linker flags: -init & -fini (i.e. from GCC command line, syntax would be -Wl -init my_init -fini my_fini).

On system supporting both methods, one possible benefit is that code in .init is run before .ctors and code in .fini after .dtors. If order is relevant that's at least one crude but easy way to distinguish between init/exit functions.

A major drawback is that you can't easily have more than one _init and one _fini function per each loadable module and would probably have to fragment code in more .so than motivated. Another is that when using the linker method described above, one replaces the original _init and _fini default functions (provided by crti.o). This is where all sorts of initialization usually occur (on Linux this is where global variable assignment is initialized). A way around that is described here

Notice in the link above that a cascading to the original _init() is not needed as it's still in place. The call in the inline assembly however is x86-mnemonic and calling a function from assembly would look completely different for many other architectures (like ARM for example). I.e. code is not transparent.

.init/.fini and .ctors/.detors mechanisms are similar, but not quite. Code in .init/.fini runs "as is". I.e. you can have several functions in .init/.fini, but it is AFAIK syntactically difficult to put them there fully transparently in pure C without breaking up code in many small .so files.

.ctors/.dtors are differently organized than .init/.fini. .ctors/.dtors sections are both just tables with pointers to functions, and the "caller" is a system-provided loop that calls each function indirectly. I.e. the loop-caller can be architecture specific, but as it's part of the system (if it exists at all i.e.) it doesn't matter.

One can also add the function pointers to a completely different self-invented section. A modified linker script and an additional function mimicking the loader .ctors/.dtors loop is needed in such case. But with it one can achieve better control over execution order, add in-argument and return code handling e.t.a. (In a C++ project for example, it would be useful if in need of something running before or after global constructors).

I'd prefer __attribute__((constructor))/((destructor)) where possible, it's a simple and elegant solution even it feels like cheating. For bare-metal coders like myself, this is just not always an option.

Some good reference in the book Linkers & loaders.

This page provides great understanding about the constructor and destructor attribute implementation and the sections within within ELF that allow them to work. After digesting the information provided here, I compiled a bit of additional information and (borrowing the section example from Michael Ambrus above) created an example to illustrate the concepts and help my learning. Those results are provided below along with the example source.

I have tried to illustrate each of those in the example below:

The example helped cement the constructor/destructor behavior, hopefully it will be useful to others as well.

Here is a "concrete" (and possibly useful) example of how, why, and when to use these handy, yet unsightly constructs...

Xcode uses a "global" "user default" to decide which XCTestObserver class spews it's heart out to the beleaguered console.

In this example... when I implicitly load this psuedo-library, let's call it... libdemure.a, via a flag in my test target á la.. 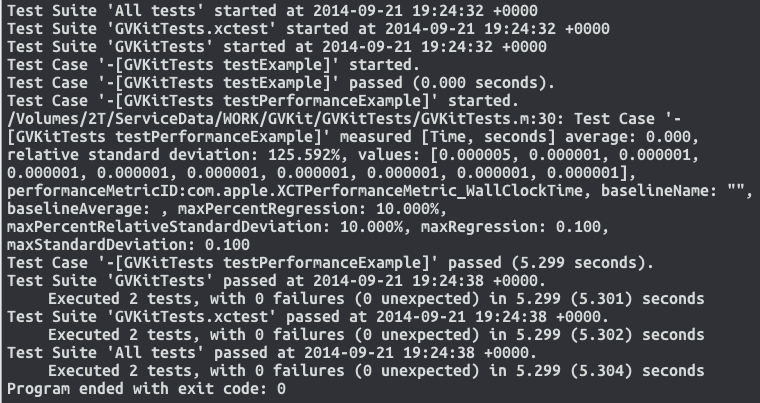 Here is another concrete example. It is for a shared library. The shared library's main function is to communicate with a smart card reader, but it can also receive 'configuration information' at runtime over UDP. The UDP is handled by a thread which MUST be started at init time.

The library was written in C.

Not the answer you're looking for? Browse other questions tagged c++ objective-c c gcc or ask your own question.

371
How to write iOS app purely in C
50
Automatically executed functions when loading shared libraries
34
__attribute__((constructor)) equivalent in VC?
9
Initialising a static variable in Objective-C category
6
Change enum values at runtime?
12
LINUX: order of statically linked module loading
4
How to execute a particular function before main() in C and JAVA ?
3
Code executed by shared library when loaded/unloaded
4
How can I inject a background thread to an application with LD_PRELOAD?
5
Does static initialization (and/or other) code get run when dlopen'ing?
See more linked questions