Ask Question
Asked 14 years, 5 months ago
Modified 3 years, 7 months ago
Viewed 252k times
176
As it currently stands, this question is not a good fit for our Q&A format. We expect answers to be supported by facts, references, or expertise, but this question will likely solicit debate, arguments, polling, or extended discussion. If you feel that this question can be improved and possibly reopened, visit the help center for guidance.
Closed 10 years ago.

I searched for this and found Maudite's question about text editors but they were all for Windows.

As you have no doubt guessed, I am trying to find out if there are any text/code editors for the Mac besides what I know of. I'll edit my post to include editors listed.

Articles related to the subject

Thank you everybody that has added suggestions.

I thought TextMate was everyone's favourite. I haven't met a programmer using a Mac who is not using TextMate.

I haven't used it myself, but another free one that I've heard good thing about is Smultron.

In my own research on this, I found this interesting article: Faceoff: Which Is The Best Mac Text Editor Ever?

But I use TextMate, and can say that it is, without a doubt, worth every penny I paid for it.

I also use RubyMine and WebStorm a lot (http://www.jetbrains.com/). They are excellent but not all purpose like TextMate.

I've tried Komodo out a bit, and I really like it so far. Aptana, an Eclipse variant, is also rather useful for a wide variety of things. There's always good ole' VI, too!

If you ever plan on making a serious effort at learning Emacs, immediately forget about Aquamacs. It tries to twist and bend Emacs into something it's not (a super-native OS X app). That might sound well and all, but once you realize that it completely breaks nearly every standard keybinding and behavior of Emacs, you begin to wonder why you aren't just using TextEdit or TextMate.

Carbon Emacs is a good Emacs application for OS X. It is as close as you'll get to GNU Emacs without compiling for yourself. It fits in well enough with the operating system, but at the same time, is the wonderful Emacs we all know and love. Currently it requires Leopard with the latest release, but most people have upgraded by now anyway. You can fetch it here.

Alternatively, if you want to use Vim on OS X, I've heard good things about MacVim.

Beyond those, there are the obvious TextEdit, TextMate, etc line of editors. They work for some people, but most "advanced" users I know (myself included) hate touching them with anything shorter than a 15ft pole.

CotEditor is a Cocoa-based open source text editor. It is popular in Japan.

Best open source one is Smultron in my opinion, but it doesn't a torch to TextMate.

There's a new kid on the block - PHPStorm. I used it for a whole year. Its not free but offers an individual license of 49$ for a year, free for Open Source Developers.

It handles gigantic files with ease; most text editors (TextMate especially) slow down to a dead crawl or just crash when presented with a large file.

The regexp and multiple-file Find dialogs beat anything else for usability.

The clippings system works like magic, and has selection, indentation, placeholder, and insertion point tags, it's not just dumb text.

BBEdit is heavily AppleScriptable. Everything can be scripted.

In 9.0, BBEdit has code completion, projects, and a ton of other improvements.

I primarily use it for HTML, CSS, JS, and Python, where it's extremely strong. Some more obscure languages are not as well-supported in it, but for most purposes it's fantastic.

The only devs I know who like TextMate are Ruby fans. I really do not get the appeal, it's marginally better than TextWrangler (BBEdit's free little brother), but if you're spending money, you may as well buy the better tool for a few dollars more.

jEdit runs on OS X, being Java-based. It's somewhat similar to TextMate, I think.

Editra looks interesting, but I've not tried it myself.

TextMate not for "advanced programmers". That does not make sense, TextMate contains everything an "advanced programmer" would want. It allows them to define a bundle that allows them to quickly set up the way they want their source code formatted, or one that follows the project guidelines, quick easy access to create entire structures and classes based on typing part of a construct and hitting tab.

TextMate is my tool of choice, it is fast, lightweight and yet contains all of the features I would want in a tool to program with. While it is not tightly integrated in Xcode, that is not a problem for me as I don't write software for Mac OS X. I write software for FreeBSD.

Definitely BBEdit. I code, and BBEdit is what I use to code.

You might consider one of the classics - they're both free, extensible and have large user bases that extend beyond the Mac:

I prefer an old-school editing setup. I use command-line vim embedded in a GNU Screen "window" inside of iTerm.

This may not integrate well with XCode, but I think it works great for developing and using command-line programs. If you spend any significant time working in a terminal, GNU Screen is worth the 30 minutes it takes to master the basic terminal multiplexing concepts.

It now supports plugins and the plugin editor can import TextMate bundles, so there's a bright future there. There aren't a lot of must-have plugins yet because the plugin support was newly introduced with version 1.6 a few months back. It's a popular app, though, so I expect more in the future.

The "killer features" for me are: * Seamless editing of remote files * Code navigator (symbol browser; pane that lists functions etc)

Most people aren't really into using symbol browsers but as I have to maintain a lot of unfamiliar code I find them invaluable.

I'm not sure that Coda has the "raw power" of TextMate though. I plan on getting familiar with TextMate next.

I make use of Komodo IDE. It supports a huge number of languages, and is customisable but is a bit expensive (my company bought me a copy). A really good alternative is the free version called Komodo Edit. Loads really quickly and has a decent feature list and I find myself turning to it rather than the full IDE for a lot of jobs.

Smultron is another good (and free) one.

I actually prefer EditRocket over TextMate. I use it on both my Mac and Ubuntu machines. It is nice to use the same editor on multiple operating systems.

Textmate is state of the Art editor, but if someone is thinking about developing on several platforms without awkward memory eaters monsters like jedit, eclipse, netbeans etc take a look at geany (geany.org). It is free. The only problem the editor has not esthetic look and feel on Mac OS X :)

Fraise is a nice free option. It has some rough edges, but you can't beat the price. I believe it's a fork or successor of Smultron. 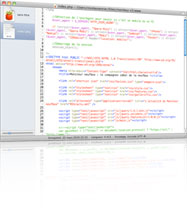 I use Eclipse as my primary editor (for Python) but I always keep SubEthaEdit handy as my supplemental text editor (free trial, 30 euros to license). It's not super-complicated but it does what I need.

Another vote for Smultron. I used it when doing some XQuery programming and being able to define a keyword files for syntax color highlighting was great.

I have installed both Smultron and Textwrangler, but find myself using Smultron most of the time.

I would love to use a different editor than XCode for coding, but I feel, that no other editor integrates tightly enough with it to be really worthwhile.
However, given some time, TextMate might eventually get to that point. At the moment though, it primarily lacks debugging features and refactoring.

For everything that does not need XCode, I love TextMate. If I had another Mac-user in my workgroup I would probably consider SubEthaEdit for its collaboration features. If it is Emacs you want, I would recommend Aquamacs (more Mac-like) or Carbon Emacs (more GNU-Emacs-like)

For small team projects which don't use a source control system, or for single user editing on multiple machines, SubEthaEdit comes highly recommended.

Eclipse and Netbeans have text editors among a whole lot of other stuff. I don't think you would want to wait 10 seconds for your text editor to become ready :/...If you are going to spend some serious time coding then spend some time and learn to use vim (emacs too but, I recommend vim)

Share
Improve this answer
answered Sep 15, 2008 at 16:52
community wiki
shyam
Add a comment  |
1
2 Next
Highly active question. Earn 10 reputation (not counting the association bonus) in order to answer this question. The reputation requirement helps protect this question from spam and non-answer activity.

3
Favorite IDE/Code Editor for Mac OS X?
32
Windows-based Text Editors
16
Setting up a Mac for programmers
2
Most feature-full collaborative editor for Mac OS X?
3
<a> tag showing as link but it is not clickable
1
Unix grep command outputs garbage
2
Will not redirect after submitting form - Form works, still get error
0
Unable to get simple Korn shell alias to work
-1
How can I edit a Dockerfile in a Mac terminal?
-2
Good Free Rails IDE for OS X
See more linked questions

1394
How can I check for an active Internet connection on iOS or macOS?
1449
Turning off auto indent when pasting text into vim
538
Open Sublime Text from Terminal in macOS
1672
How do I install pip on macOS or OS X?
1258
How to set or change the default Java (JDK) version on macOS?
1028
"code ." is not working in on the command line for Visual Studio Code on OS X/Mac
1062
How do I duplicate a line or selection within Visual Studio Code?
3289
Git is not working after macOS Update (xcrun: error: invalid active developer path (/Library/Developer/CommandLineTools)