New Relic currently URL encodes the JSON payload of our webhooks. We correctly include the necessary header, however, I'm wondering if this is best practice - or if the JSON payload should be sent un-encoded (or even with some different encoding)? 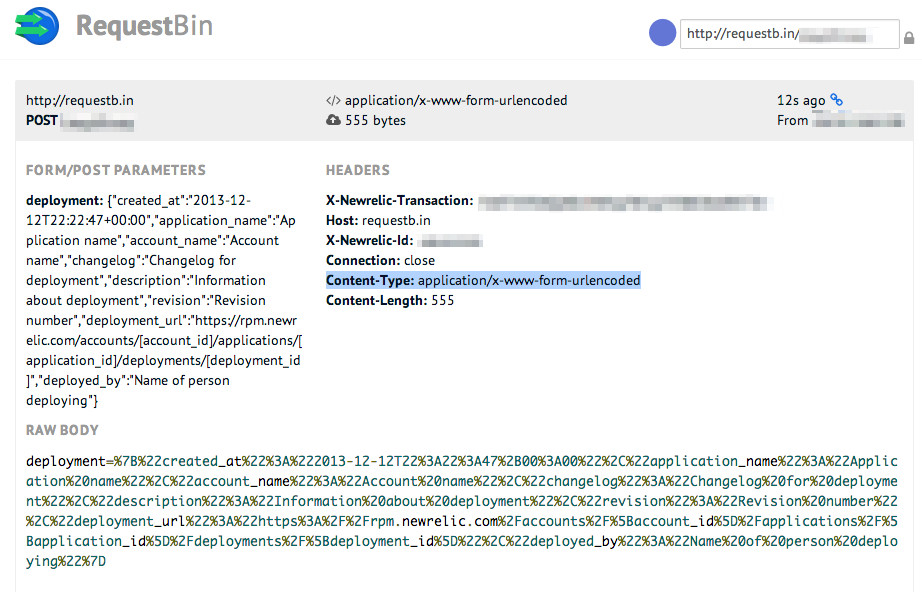 It's more common to send JSON directly in the request body with a Content-Type header value of application/json. It's not entirely uncommon to do it the way New Relic does however. GitHub post-receive hook payloads are also encoded this way.

In some languages/frameworks it's easier to extract the JSON data from a parameter than from reading the entire request body since form parameters are automatically parsed out and easily referenced and in some cases reading a request body may involve some more elaborate stream parsing.

An example of that is PHP's syntax for extracting the entire raw request body:

Versus extracting from a form parameter:

For frameworks that easily expose the request body, this isn't as much an issue. Here's the example given from the GitHub docs for handling the hook with Sinatra:

If the JSON body were passed directly, this is what it would look like:

It's mostly just an aesthetic preference, there's no technical advantage to either. With the parameter, you do get the flexibility of sending multiple JSON payloads in a single request or the option to send additional meta data outside the JSON. I would suggest sending a list of JSON objects and including all the meta data in a top level wrapper if that's important to you. Something like this:

I personally prefer raw JSON bodies, but that's mostly because it makes debugging far easier on sites like RequestBin. Your screenshot does a great job of illustrating how unreadable JSON encoded into a form parameter is.

Payloads should be the content type you say they are. If they are sending as application/x-www-form-urlencoded then that is what you should expect to find. The culture of using a Russian doll model of nested encodings is beyond stupid in my opinion.

If you want to send JSON send it as application/json. Is that really so hard?

Not the answer you're looking for? Browse other questions tagged json encoding webhooks or ask your own question.

2062
How do I format a Microsoft JSON date?
8206
Can comments be used in JSON?
3257
How can I pretty-print JSON in a shell script?
10663
What is the correct JSON content type?
621
Preferred method to store PHP arrays (json_encode vs serialize)
4225
Why does Google prepend while(1); to their JSON responses?
2722
pretty-print JSON using JavaScript
3189
How do I POST JSON data with cURL?