Get source JARs from Maven repository

Does anyone have any idea if you can find source JARs on Maven repositories?

Maven Micro-Tip: Get sources and Javadocs

When you're using Maven in an IDE you often find the need for your IDE to resolve source code and Javadocs for your library dependencies. There's an easy way to accomplish that goal.

The first command will attempt to download source code for each of the dependencies in your pom file.

The second command will attempt to download the Javadocs.

In case you have a lot of dependencies it might also be a good idea to use inclusions/exclusions to get specific artifacts, the following command will for example only download the sources for the dependency with a specific artifactId:

Configuring and running the maven-eclipse plugin, (for example from the command line mvn eclipse:eclipse )

If a project creates a jar of the project sources and deploys it to a maven repository, then you'll find it :)

Just FYI, sources artifacts are generally created by the maven-source-plugin. This plugin can bundle the main or test sources of a project into a jar archive and, as explained in Configuring Source Plugin:

The additional text was given to describe an artifact ("-sources" or "-test-sources" here) is called a classifier.

To declare a dependency on an artifact that uses a classifier, simply add the <classifier> element. For example:

Note that you generally don't do this, most IDEs provide support to download sources (and/or JavaDoc) from the main artifact without declaring explicitly a dependency on them.

Finally, also note that some repository search engines allow searching for artifacts using the classifier (at least Nexus does with the advanced search). See this search for example.

For Groovy sources this would be

For Groovy's javadoc you would use

This puts the given artifact into your local Maven repository, i.e. usually $HOME/.m2/repository.

dependency:sources just downloads the project dependencies' sources, not the plugins sources nor the sources of dependencies defined inside plugins.

you can find info in this related question: Get source jar files attached to Eclipse for Maven-managed dependencies
if you use the eclipse maven plugin then use 'mvn eclipse:eclipse -DdownloadSources=true'

if you're using eclipse you could also open Preferences > Maven and select Download Artifact Sources, this would let the pom.xml intact and keep your sources or java docs (if selected) just for development right at your machine location ~/.m2

Maven should be configured with Eclipse. 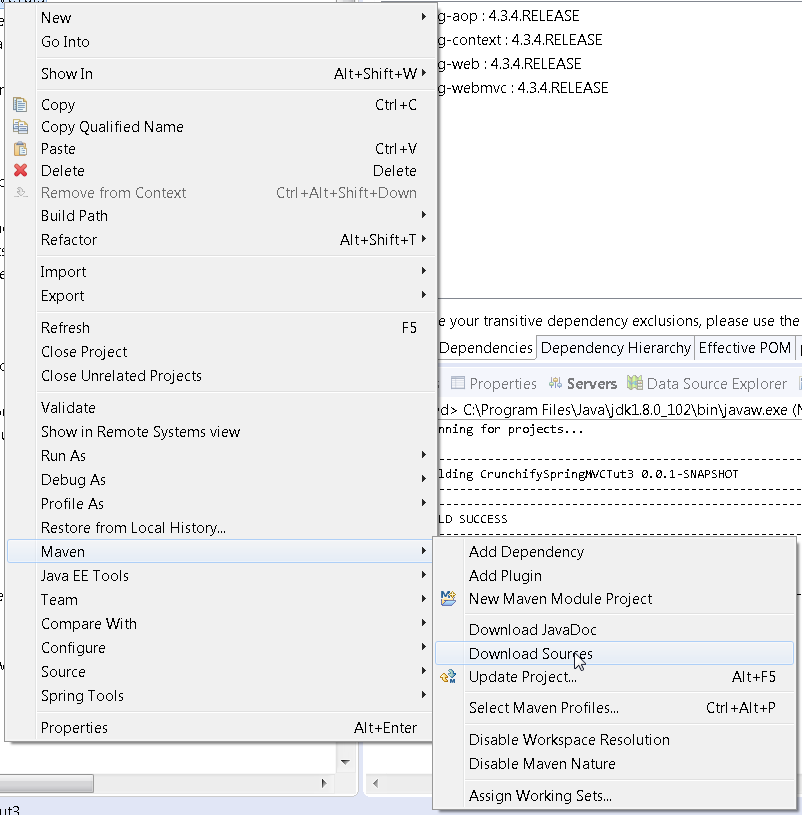 You can, if they are uploaded. Generally they are called "frameworkname-version-source(s)"

In NetBeans 8 with a Maven-driven project, merely context-click on the jar file list item of the dependency in which you are interested. Choose Download Sources. Wait a moment and NetBeans will automatically download and install the source code, if available.

Similarly you can choose Download Javadoc to get the doc locally installed. Then you can context-click some code in the editor and choose to see the JavaDoc. 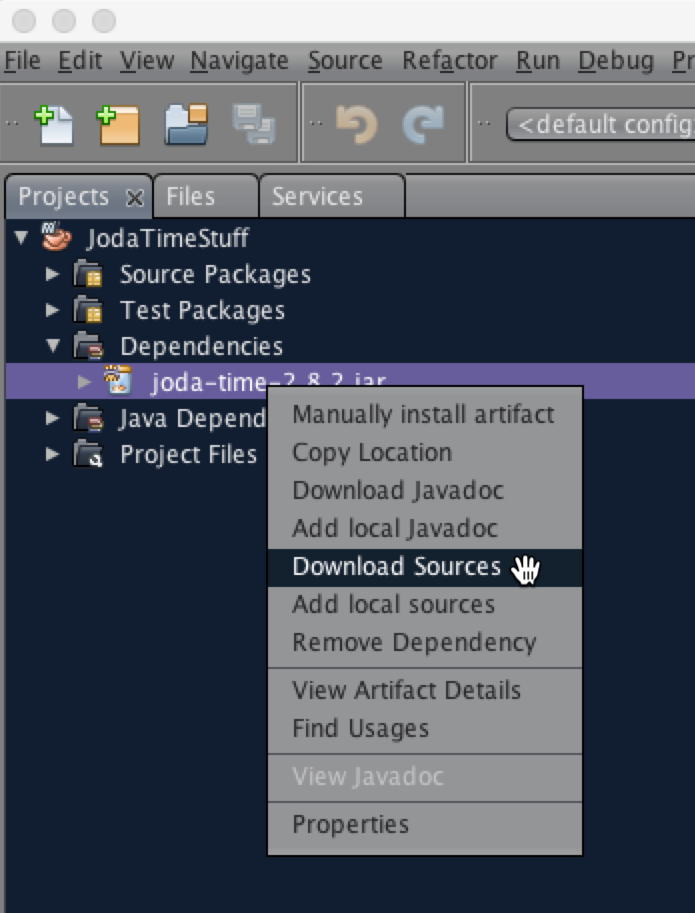 Based on watching the Maven console in Eclipse (Kepler), sources will be automatically downloaded for a Maven dependency if you attempt to open a class from said Maven dependency in the editor for which you do not have the sources downloaded already. This is handy when you don't want to grab source for all of your dependencies, but you don't know which ones you want ahead of time (and you're using Eclipse).

I ended up using @GabrielRamierez's approach, but will employ @PascalThivent's approach going forward.

and you will get a page like this, chose the version you need,just enjoy it!

I have also used the eclipse plugin to get the project into the eclipse workspace. Since I've worked on a different project I saw that it is possible to work with eclipse but without the maven-eclipse-plugin. That makes it easier to use with different environments and enables the easy use of maven over eclipse. And that without changing the pom.xml-file.

So, I recommend the approach of Gabriel Ramirez.

I will explain it using a demonstration for "spring-boot-actuator-autoconfigure".

Otherwise, you can always "git clone" the repo from github, if its there and get the specific code.

As explained by others, you can use "mvn dependency:sources" command the get and generate sources jar for the dependency you are using.

Note: Some dependencies will not have sources.jar, as those contains no source code but a pom file. e.g. spring-boot-starter-actuator. As in this case:

In IntelliJ IDEA you can download artifact sources automatically while importing by switching on Automatically download Sources option: 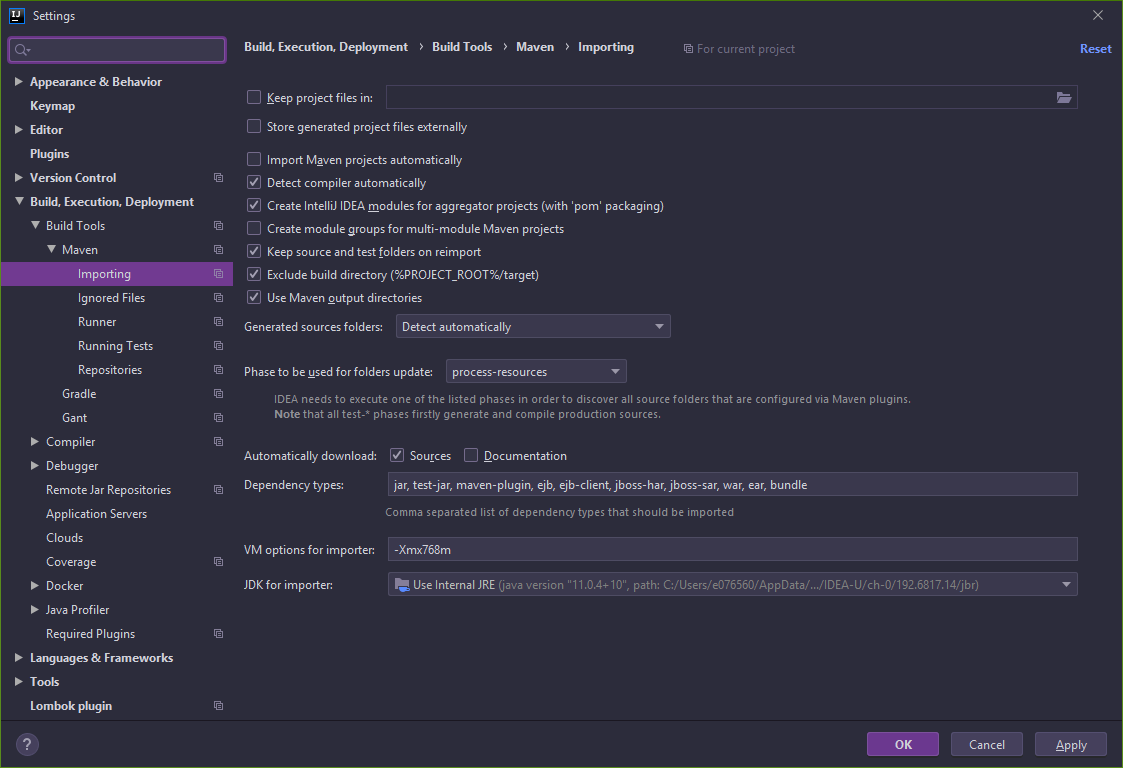 If you want find the source jar file for any of the artifact manually, go to maven repository location for the particular artifact and in Files click on 'view All'. You can find source jar file.

For debugging you can also use a "Java Decompiler" such as: JAD and decompile source on the fly (although the generated source is never the same as the original). Then install JAD as a plugin in Eclipse or your favorite IDE.

If you're using Eclipse, I would recommend downloading both the source and the Javadocs of third-party libraries.

Downloading Javadocs means that typically you can get contextual help for methods from third-party libraries, with useful description of parameters, etc. This is essential if you don't know the library well. In some cases I have found that Javadocs are available when the source isn't.

Not the answer you're looking for? Browse other questions tagged java maven mvn-repo or ask your own question.

0
View source code of compiled jar libs using eclipse
0
Javadoc for StringUtils
184
Get source jar files attached to Eclipse for Maven-managed dependencies
96
Library source does not match the bytecode for class
14
How to download sources for an specific JAR dependency of a Maven project
9
include source code while exporting a jar using maven
2
How do I make Leiningen download the source of a required library?
3
What are the downsides to including source code in JAR files?
2
Eclipse|Maven: Can't download source code of jar package?
4
How to get maven dependency sources and unpack them to a specified directory?
See more linked questions

864
How do I tell Maven to use the latest version of a dependency?
3954
Create ArrayList from array
4512
How do I read / convert an InputStream into a String in Java?
723
Can I add jars to Maven 2 build classpath without installing them?
2741
How can I create an executable JAR with dependencies using Maven?
972
Differences between dependencyManagement and dependencies in Maven
736
When maven says "resolution will not be reattempted until the update interval of MyRepo has elapsed", where is that interval specified?
1466
How to add local jar files to a Maven project?
2403
What's the difference between @Component, @Repository & @Service annotations in Spring?
786
Dealing with "Xerces hell" in Java/Maven?