I am a SQL Server user .

I am on a project that is using oracle (which I rarely use) I need to create an ODBC connection so I can access the some data via MS Access I have a application on my machine called oraHome90. It seems to allow a configuration of something called a listener in a “net configuration utility”, I think that a “Local Net Service Name Configuration” needs to also be done. The IT support gave me this information to set up the ODBC connection . I have tried every combination that I can think of. I can get past a test that successfully passes a test to “login“ to the oracle server database. When I try to create the ODBC connection I get the following error: ORA-12154: TNS: Could not resolve service name.

Assuming that I want to start from scratch and the following information is supposed to allow for me to connect to the database….. Any suggestions or comment ? Note: ultimately the project will have a website .ASP page query the data, but I have to first prove that I can see the data using the ODBC connection via MS Access

Going on the assumption you're using TNSNAMES naming, here's a couple of things to do:

This is assuming you're using the standard Oracle port of 1521. Note that servicename_alias can be any name you want to use on the local system. You may also find that you need to specify (SID = SERVICENAME) instead of (SERVICENAME=SERVICENAME).

Check for the registry key “TNS_ADMIN” at HKEY_LOCAL_MACHINE\SOFTWARE\ORACLE. If it exists then make sure it has the right value as “Dir:\app\product\11.1.0\client_1\network\admin”. If you don’t see the key then create the key and set appropriate value as below. Regedit->HKEY_LOCAL_MACHINE->Software->Oracle->RightClick NEW->StringValue and name it TNS_ADMIN and give the value “X:\app\product\11.1.0\client_1\network\admin”

@Warren and @DCookie have covered the solution, one thing to emphasise is the use of tnsping. You can use this to prove your TNSNames is correct before attempting to connect.

Once you have set up tnsnames correctly you could use ODBC or try TOra which will use your native oracle connection. TOra or something similar (TOAD, SQL*Plus etc) will prove invaluable in debugging and improving your SQL.

Last but not least when you eventually connect with ASP.net remember that you can use the Oracle data connection libraries. See Oracle.com for a host of resources.

If there is a space in the beginning of the tns name define in file tnsnames.ora, then some of the the connectors like odbc may give this error. Remove space character in the beginning.

It has nothing to do with a space embedded in the folder structure.

I had the same problem. But when I created an environmental variable (defined both at the system- and user-level) called TNS_HOME and made it to point to the folder where TNSNAMES.ORA existed, the problem was resolved. Voila!

Just install ToadForOracle in C:\ or any directory without parenthesis in the path.

In my case its because I was on a x64 PC and still using the old Oracle 9i with the 32bit drivers!

I am using SQL Reporting Services with an Oracle Database. The problem is the brackets in the path to Visual Studio (BIDS). Oracle doesn't like apps that start in a path with brackets:

So I made a BAT file to open Visual Studio with Progra~2 as the short path name for "Program Files (x86)".

Here is the contents of the BAT file:

I name this BAT file StartBIDS.BAT and put it in the directory:

Then I make a short cut to the BAT file on my Desktop and also my Start Menu and change the ShortCuts icon. This allows me to open TOAD, Visual Studio, BIDS and etc apps that I use to work with Oracle.

Then remove the brackets in the shortcut: 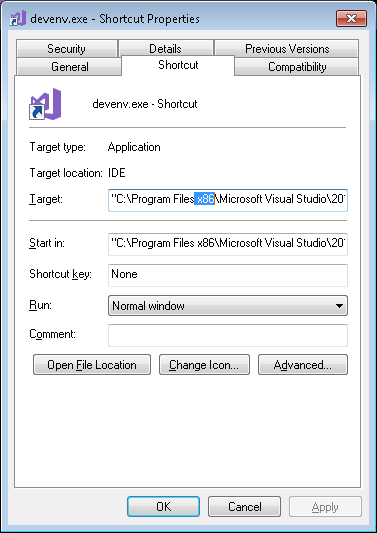 I experienced this problem too. I discovered the problem is because Oracle DB does not like the space in C:program files (x86)\Toad...... so I created a new directory named C:App\Toad then reinstalled in it to connect Toad to Oracle. It worked.

This was mentioned in a comment to another answer, but I wanted to move it to an actual answer since this was also the problem in my case and I would have upvoted it if it had been an answer.

I'm on Linux and the tnsnames.ora file was not set to readable by everyone. After making it readable connecting via tns locally worked.

I had a same problem and the same error was showing up. my TNSNAMES:ORA file was also good to go but apparently there was a problem due to firewall blocking the access. SO a good tip would be to make sure that firewall is not blocking the access to the datasource.

I fixed this problem using this steps.

First of all, this error occured , if you didn't install same directory or drive.

But the answer is here.

I have resolved this issue by removing sqlnet.ora from the C:\oracle\ora92\network\ADMIN path

Hours of problems SOLVED. I had installed the Beta Entity Framework for Oracle and in in visual studio 2010 MVC 3 project I was referencing under the tab .NET the Oracle.DataAccess ... This kept giving me the "Oracle ORA-12154: TNS: Could not..." error. I finally just browsed to the previous Oracle install under c:\Oracle\product.... using the old 10.2.0.100 version of the dll. Finally it works now. Hope it helps someone else.

I just spend an hour on this, I'm new to Oracle so i was thoroughly confused..

just installed visual studio 2012 Oracle developer tools. When i did this I lost the items in my drop down which contained my TNS entries in TOAD. I was getting this error from Visual studio AND TOAD!! WTH! so i added the environmental Variable TNS_ADMIN under "ALL USERS" with the path to my .ora file (which i now worked fine because it worked until I broke it). Toad picked up that change. Still Visual Studio wouldn't give me any love... still getting same error. THEN, i added the environmental Variable TO MY USER VARIABLES.. VIOLA!!

Only restart the SID services. For example you SID name = orcl then all the services which related to orcl should be restart then you problem will be solved

We resolved our issues by re-installing the Oracle Database Client. Somehow the installation wasn't successful on 1 of the workstations (even though there was no logging), however when comparing size/files/folders of the Oracle directory to a working client workstation, there was a significant amount of files that were missing. Once we performed a clean install, everything worked perfectly.

In my case, the error are because I have 2 Oracle clients, It's the solution:

Oracle ORA-12154 error on local IIS, but not with Visual Studio Development Server

We also had the similar issue. What we found out that we had provided multiple aliases for our connection string in tnsnames.ora, something like:

so when creating a connection using ODBC, when we selected the value for TNS service name, the auto populate was showing 'svc01,' (please note the extra comma there). As soon as we removed the comma, it started working for us.

If you have a 32bit DSN and a 64bit DSN with same names, Windows will automatically choose the 64bit one and If your application is 32bit it shows this error. Just watch out for that.

I had this problem because of a typo in the filename tsnames.ora instead of tnsnames.ora

This error message can be very confusing and the solution can be surprisingly primitive.

The problem was a number of decimal numbers in the Oracle data column sent to Excel 2010. When I used Oracle SQL query ROUND(grosssales_eur,2) AS grosssales_eur, it worked fine.

Not the answer you're looking for? Browse other questions tagged oracle odbc tns or ask your own question.

4
Oracle ORA-12154 error on local IIS, but not with Visual Studio Development Server
0
Connection string to connect to oracle 11g from classic asp
1
how to resolve connection error while connecting to oracle database in visual studio 2008 for crystal report