Xcode: What is a target and scheme in plain language?

Yeah the title says it :-) What do they mean in plain English language? I really don't understand the explanation on Apple's website and I need to rename my target and I'm afraid that nothing works after that..

I've added in Workspace and Project too!

A target is an end product created by running "build" in Xcode. It might be an app, or a framework, or static library, or a unit test bundle. Whatever it is, it generally corresponds to a single item in the "built products" folder.

A scheme represents a collection of targets that you work with together. It defines which targets are used when you choose various actions in Xcode (Run, Test, Profile, etc.) Often, you will have just one scheme, which uses the main app target for the Run, Archive, and Profile actions, and a unit test target for the Test action. If you were building two related apps, you might have two schemes that used the same unit test bundle but different app targets.

The main benefit of schemes (introduced in Xcode 4) is that they allow you to switch between running your app and your unit tests without needing to toggle the selected target.

I am a visual person, hence to explain the concept I will be using a diagram.

When you have multiple targets they can be one-to-one matched with Xcode's Run,Test,Profile actions, this concept defines a scheme

A target is a version of your Project,i.e targets differ slightly in classes & resources to use during built time. A project can have multiple built time setting for separate distribution requirements.

Workspace (.xcworkspace) - is a container of multiple projects. It was created as a next step of cross-project references[About]

Project (.xcodeproj) - It is a container for targets and scheme. It defines code files, resources...

You can convert existing Project into Workspace

Scheme can be shared which helps you in CI, Carthage[Example]... and located:

Dependency - Targets can have dependencies. Dependency is a source link against. These dependencies can be linked statically or dynamically[About] There are two types of them:

Make sure you See this moment of WWDC video — Introduction to Xcode. If you wanted to gain deeper knowledge then watch the entirety of the video. The video is simple to follow yet very foundational. My answer is mostly off of that.

Run will run my app in the debugger.

Test will run my tests.

Profile will run my app in instruments so I can measure its performance.

Analyze will run Xcode's static analyzer and help catch problems I might otherwise have missed.

And finally, the Archive action will build my app for release and put it in the archive that I can then use to distribute to my testers or to the App Store or to save for future crash log de-symbolication, or symbolication.

A project is a document that you use to organize your code an resources in Xcode.

You have references to source code files and resource files on disc, targets which actually build those files into products like your app, Build settings which configure how your targets build their products, and schemes which configure how you perform actions, such as Run [test, build], with your targets. A target contains the instructions to build one thing like an app or a framework.

And lastly, a target has Build settings to configure how it builds its product.

Now, one thing to note is that both projects and targets have Build settings, and targets inherit the value set at the project level but can override them with a target-specific value.

A target's build phases do things like cause dependencies to build first, compile the source files in that target, and link the target against libraries and frameworks.

If you go to your target's Build Phase >> Compile Sources you'll see every file that's being built for that target. Example: 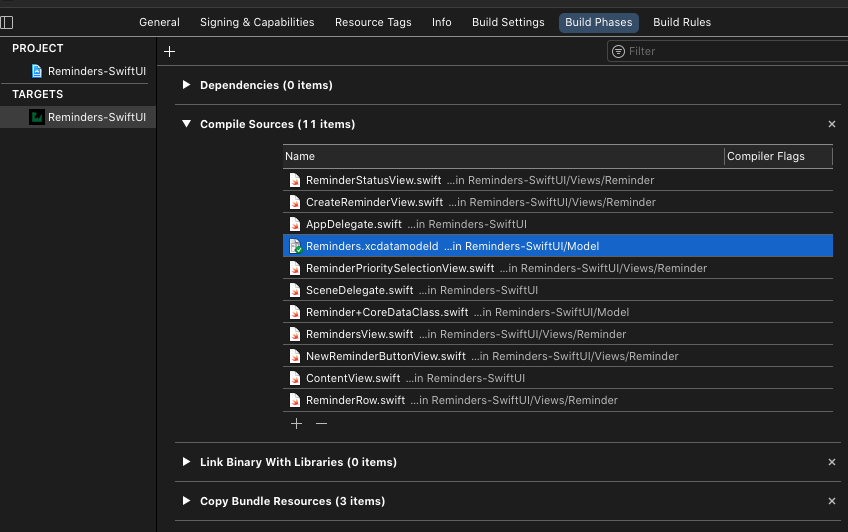 A target specifies a product to build and contains the instructions for building the product from a set of files in a project or workspace. A target defines a single product; it organizes the inputs into the build system—the source files and instructions for processing those source files—required to build that product. Projects can contain one or more targets, each of which produces one product.

The instructions for building a product take the form of build settings and build phases, which you can examine and edit in the Xcode project editor. A target inherits the project build settings, but you can override any of the project settings by specifying different settings at the target level. There can be only one active target at a time; the Xcode scheme specifies the active target.

A target and the product it creates can be related to another target. If a target requires the output of another target in order to build, the first target is said to depend upon the second. If both targets are in the same workspace, Xcode can discover the dependency, in which case it builds the products in the required order. Such a relationship is referred to as an implicit dependency. You can also specify explicit target dependencies in your build settings, and you can specify that two targets that Xcode might expect to have an implicit dependency are actually not dependent. For example, you might build both a library and an application that links against that library in the same workspace. Xcode can discover this relationship and automatically build the library first. However, if you actually want to link against a version of the library other than the one built in the workspace, you can create an explicit dependency in your build settings, which overrides this implicit dependency.

A given target can be put through different actions.

For more on that see Managing Schemes

To put it all together:

Once you hit run, Xcode will look at the selected scheme. It will find its associated target(s). Use the Build Phases of that target and its Build Settings (any Project Settings that isn't overridden by the target settings will get included) to build a product into the selected destination (the destination can be an iPhone simulator or a physical iPhone or watchOS, etc). 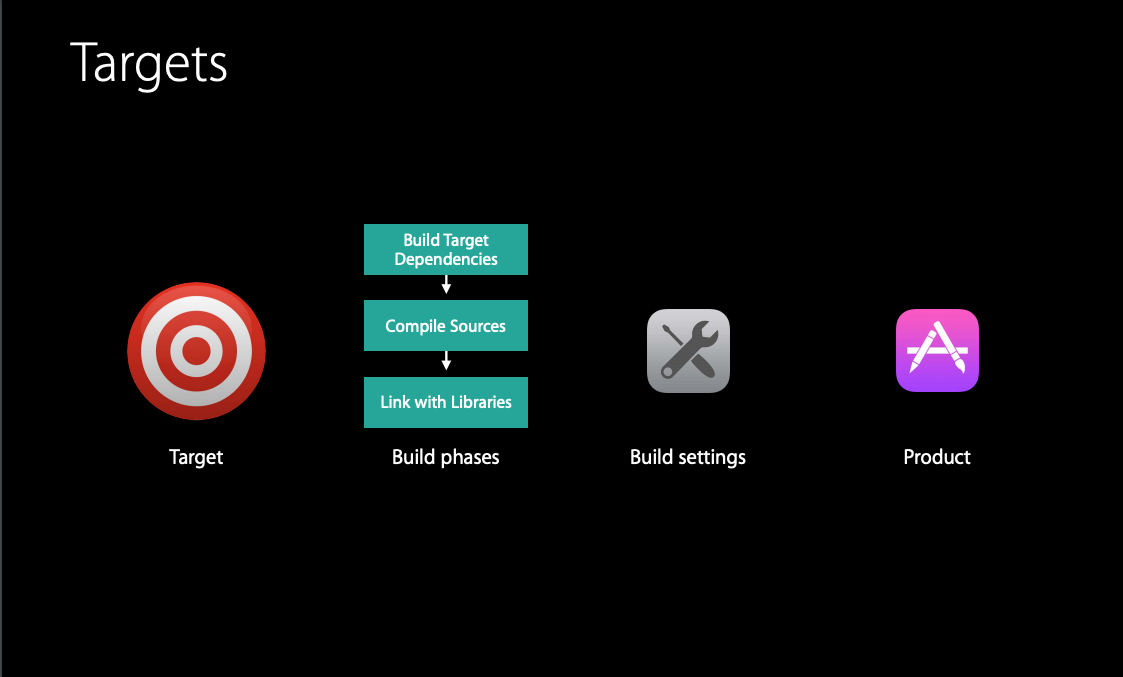 Target -- a lower abstraction -- various kinds of builds. Each target has its own Build Settings (so if you split into several targets, take care of that huge sheet individually for each target). Targets have a convenient way of including/excluding files, so you can configure the build effectively on a per-file basis.

Scheme -- a higher abstraction -- guides a target through various ways of deployment (Run, Test, Archive). Has modest ways of configuring the build through Environment Parameters, but employs the Build Settings from the target. Creating / editing / deleting schemes is cheaper and easier than targets.

You can have several schemes guiding one target in several different ways.

Not the answer you're looking for? Browse other questions tagged ios xcode xcode-scheme xcode-target or ask your own question.

0
What are targets in Xcode?
512
Xcode Project vs. Xcode Workspace - Differences
145
Android studio: new project vs new module
217
Library? Static? Dynamic? Or Framework? Project inside another project
163
Adding a build configuration in Xcode
149
When should we use "embedded binaries" rather than "Linked Frameworks" in Xcode?
93
How to update just one library from the Cartfile with Carthage?
77
Xcode 4.2 how include one project into another one?
50
New to Xcode can't open files in c++?
105
"Do Not Embed", "Embed & Sign", "Embed Without Signing". What are they?. What they do?
See more linked questions

436
Xcode "Build and Archive" from command line
275
Warning: The Copy Bundle Resources build phase contains this target's Info.plist file
11
Xcode: Which files need to be members of my target? (Target Membership)
82
Xcode 5 and iOS 7: Architecture and Valid architectures
18
Xcode 6.1 different "deployment info" section for duplicated target
2
Disable Target Localization in Xcode
274
Xcode 10: A valid provisioning profile for this executable was not found
3
How to set Base Localization & Development Language in Xcode 12(.5)?