Signal Relationships and Conversion: Transforming one Signal into another?

I'm trying to relate a near shore tidal signal (point A) to 3 points along a long model boundary (points B C D). I want to possibly have a relationship between B C D with which we can convert A predictions into B C and D. At the moment I'm doing a single phase shift, an amplitude ration for levels above zeros, an amplitude ration for levels below zero and a mean level shift.

This creates a kink in the Tidal signal at Peak ebb and Peak flood and results in the model over predicting ebb currents. I was wondering if anyone is aware of a more complex relationship for this sort of transformation?

An example algorithm for current process.

BTW: The relationship is based on about 6 months of data.

EDIT 1: Well, firstly just think of two sinusoidal signals (ie. amplitude, phase shift), but not regular, so for example the period is 12.5 hrs but the slopes and periods of the positive half and negative half aren't all the same. You don't need any contextual knowledge. Im just looking for a transformation algorithm.

Here's a pic of the timeseries and the fft comparisons (fft focused on frequencies of high energy (12.5 hrs (semidiurnal)), just to give idea not all frequencys are so scaled nicely). Black is A. green in zeros line. 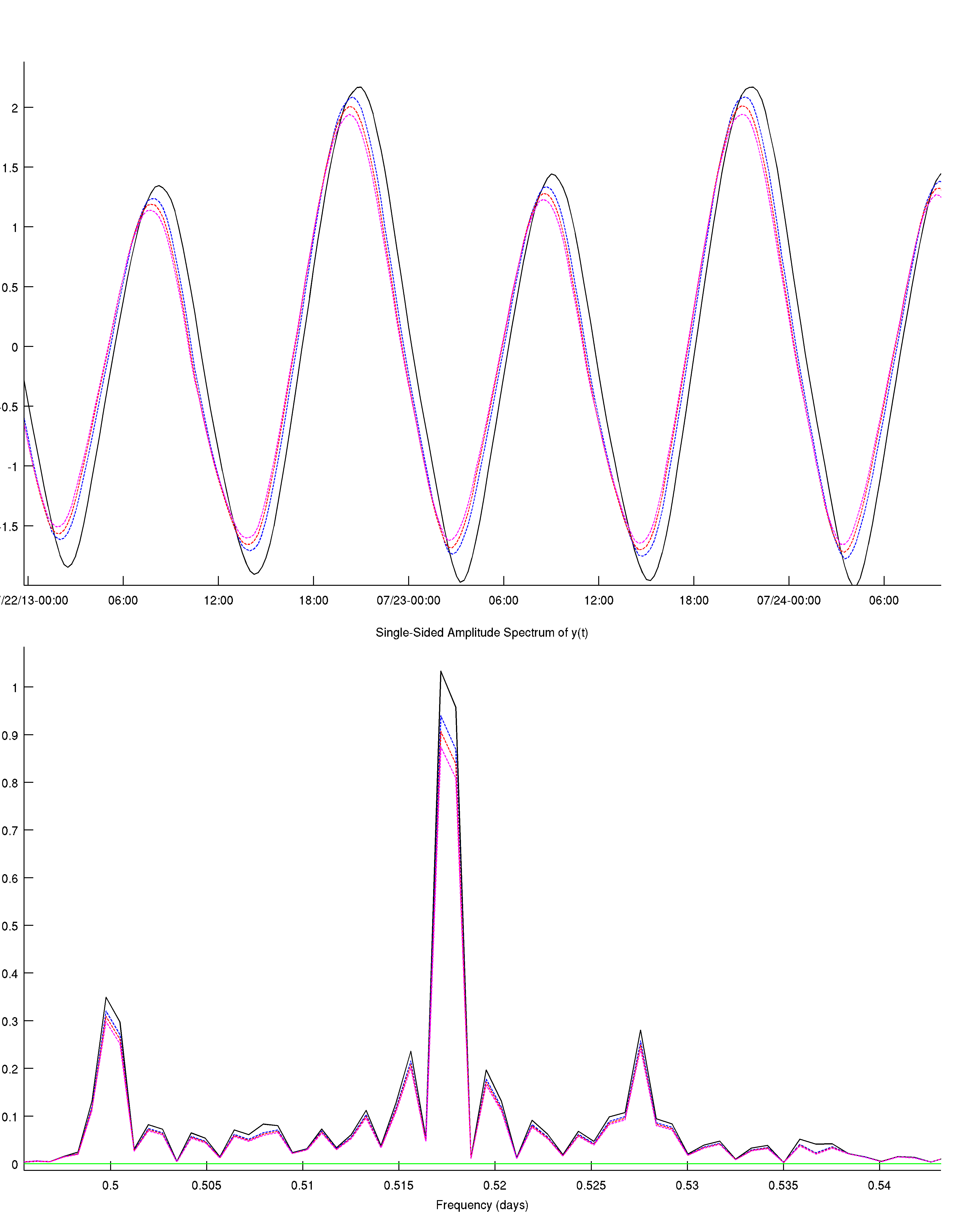 Without a more detailed knowledge of your domain, it's difficult to provide a definitive answer for you. I will make the assumption here that your tidal behaviour is a linear time invariant (LTI) system. From the data you have shown in your question, this looks to be a reasonable assumption.

This will produce a plot very similar in appearance to the picture you posted in your question. If your tidal behaviour cannot be approximated by an LTI system, then you may have to perform some more complex non-linear modelling.

For more precise predictions you will need more data. Have a look at the following paper (unfortunately written in German; I'm not aware of an english translation):

Fortunately this paper contains lot of tables and pictures which can be understood without knowing the German language.

In summary: Beside the tidal levels at point A, B, C, D you certainly need some approximation of the depth profile of the sea floor and you will need wind data for your computations. And only six months of real world data are not enough: You will need at least a year of data to cover all seasons.

This looks similar to a forced oscillation (driven by the moon) with disturbances in the sea-air system.

Could you set up a system of four ODE's and an external source of force, like:

where the -vvvvv- is supposed to resemble mechanical springs.

All the springs are also affected by the moon, probably with some slight phase shift if the points are further apart.

If you want to live on the edge, you could try to make the couplings behave slightly non-linear (ie, flatten out slightly when reaching max, which could be thought of as the increasing surface of the sea when it rises).

Not the answer you're looking for? Browse other questions tagged algorithm matlab signal-processing fft ifft or ask your own question.

3
VB FFT - stuck understanding relationship of results to frequency
87
Understanding FFT output
5
Finding the sample at the beginning of a period of a compound periodic signal
48
Understanding Matlab FFT example
1
How do I obtain Energy spectrum of a signal after FFT in Matlab?
1
FFT plot in Matlab
3
Changing the inverse fast Fourier transform (ifft) to use an arbitrary waveform instead of sine waves to create a new signal
4
Generate a quasi periodic signal
1
Amplitude and phase spectrum. Shifting the phase leaving amplitude untouched