Computing diffs within groups of a dataframe

Say I have a dataframe with 3 columns: Date, Ticker, Value (no index, at least to start with). I have many dates and many tickers, but each (ticker, date) tuple is unique. (But obviously the same date will show up in many rows since it will be there for multiple tickers, and the same ticker will show up in multiple rows since it will be there for many dates.)

Initially, my rows in a specific order, but not sorted by any of the columns.

I would like to compute first differences (daily changes) of each ticker (ordered by date) and put these in a new column in my dataframe. Given this context, I cannot simply do

because adjacent rows do not come from the same ticker. Sorting like this:

doesn't solve the problem because there will be "borders". I.e. after that sort, the last value for one ticker will be above the first value for the next ticker. And computing differences then would take a difference between two tickers. I don't want this. I want the earliest date for each ticker to wind up with an NaN in its diff column.

This seems like an obvious time to use groupby but for whatever reason, I can't seem to get it to work properly. To be clear, I would like to perform the following process:

I have to imagine this is a one-liner. But what am I missing?

Ok...some progress. I can do the following to get a new dataframe:

But if I understand the mechanics of groupby, my rows will now be sorted first by ticker and then by date. Is that correct? If so, would I need to do a merge to append the differences column (currently in result['current'] to the original dataframe df?

wouldn't be just easier to do what yourself describe, namely

and then correct for borders:

to maintain the original index you may do idx = df.index in the beginning, and then at the end you can do df.reindex(idx), or if it is a huge dataframe, perform the operations on

and then join the two dataframes at the end.

Ok. Lots of thinking about this, and I think this is my favorite combination of the solutions above and a bit of playing around. Original data lives in df:

This will accomplish everything I want. And what I really like is that it can be generalized to cases where you want to apply a function more intricate than diff. In particular, you could do things like lambda x: pd.rolling_mean(x, 20, 20) to make a column of rolling means where you don't need to worry about each ticker's data being corrupted by that of any other ticker (groupby takes care of that for you...).

So here's the question I'm left with...why doesn't the following work for the line that starts df['diffs']:

when I do that, I get a diffs column full of 0's. Any thoughts on that?

I know this is an old question, so I'm assuming this functionality didn't exist at the time. But for those with this question now, this solution works well:

In order to return to the original order, you can the use 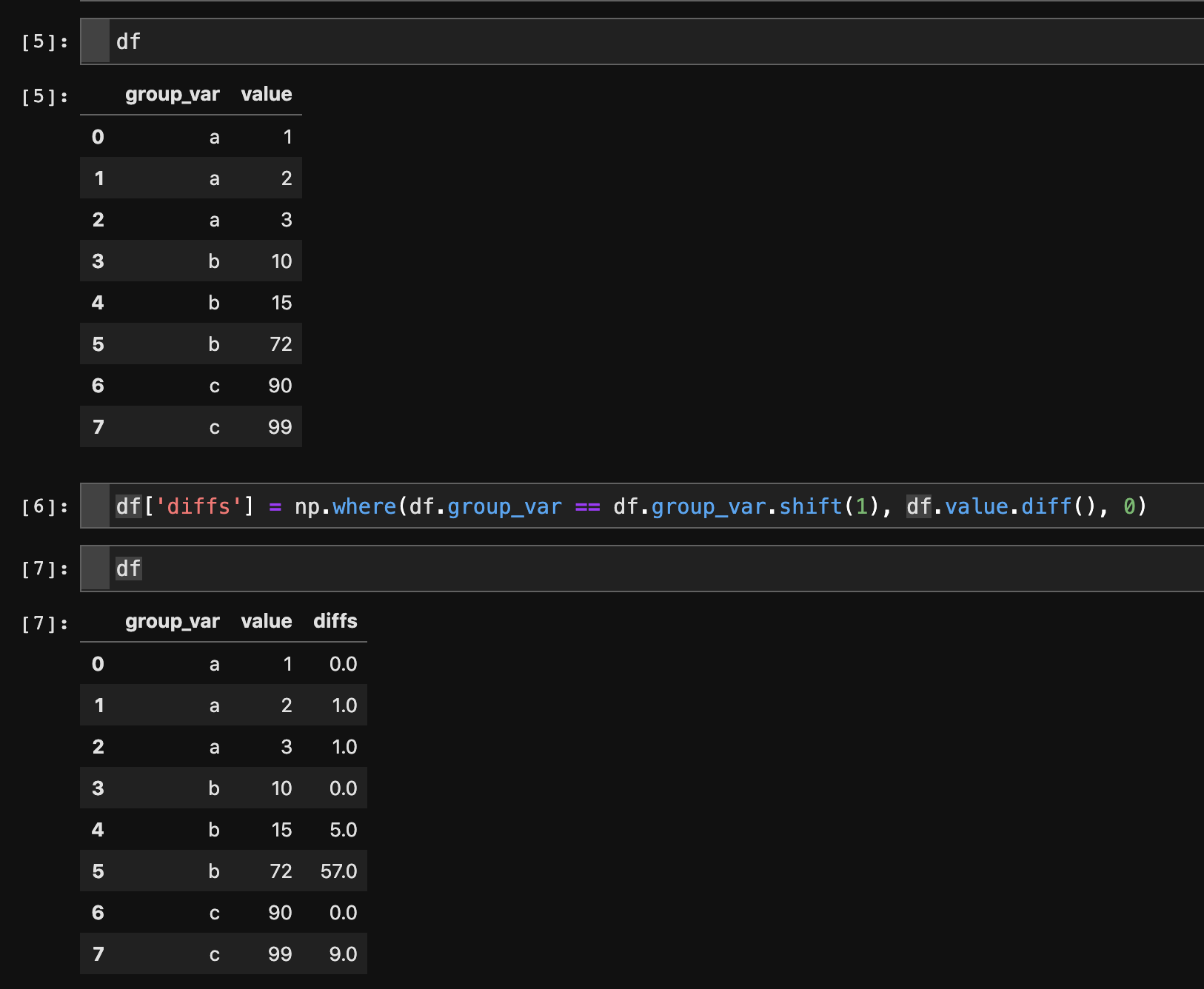 Here is a solution that builds on what @behzad.nouri wrote, but using pd.IndexSlice:

You can use pivot to convert the dataframe into date-ticker table, here is an example:

convert the dataframe by pivot format:

Not the answer you're looking for? Browse other questions tagged python pandas or ask your own question.

0
How to diff() time-series data with mixed values
33
Pandas groupby multiple fields then diff
35
Computing np.diff in Pandas after using groupby leads to unexpected result
6
Python - Pandas - Unroll / Remove Cumulative Sum
5
Python Pandas - Minutes since last occurrence in 2 million row dataframe
2
Speeding up group-wise differencing in Pandas
0
Python dataframe - counting number of positive return days
1
Difference between tables
-1
Zipcodes with a cumulative column over time: add column that contains the added value
0
group data using pandas, but how do I keep the order of the group and do math on two of the columns rows?
See more linked questions

1585
Selecting multiple columns in a Pandas dataframe
1971
Delete a column from a Pandas DataFrame
412
Get the row(s) which have the max value in groups using groupby
1616
How do I get the row count of a Pandas DataFrame?
3526
How to iterate over rows in a DataFrame in Pandas
3091
How do I select rows from a DataFrame based on column values?
496
Convert Python dict into a dataframe
712
Get statistics for each group (such as count, mean, etc) using pandas GroupBy?
277
pandas groupby, then sort within groups