How to completely remove node.js from Windows

I uninstalled my previous version of node.js (0.8.11) and downloaded the latest, 0.10.24 from the node.js website and installed it. However, after running node --version, it still indicates that I'm running v0.8.11. Obviously, some stuff was left behind during the uninstall process, and it's causing me to have all sorts of errors when trying to add modules through npm. I've seen solutions to this for OSX and Linux, but couldn't find anything for Windows. I'm running Windows 7 64-bit.

How to remove Node.js from Windows:

Scenario: Removing NodeJS when Windows has no Program Entry for your Node installation

I ran into a problem where my version of NodeJS (0.10.26) could NOT be uninstalled nor removed, because Programs & Features in Windows 7 (aka Add/Remove Programs) had no record of my having installed NodeJS... so there was no option to remove it short of manually deleting registry keys and files.

I attempted to install the newest recommended version of NodeJS, but it failed at the end of the installation process and rolled back. Multiple versions of NodeJS also failed, and the installer likewise rolled them back as well. I could not upgrade NodeJS from the command line as I did not have SUDO installed.

SOLUTION: After spending several hours troubleshooting the problem, including upgrading NPM, I decided to reinstall the EXACT version of NodeJS on my system, over the top of the existing installation.

That solution worked, and it reinstalled NodeJS without any errors. Better yet, it also added an official entry in Add/Remove Programs dialogue.

Now that Windows was aware of the forgotten NodeJS installation, I was able to uninstall my existing version of NodeJS completely. I then successfully installed the newest recommended release of NodeJS for the Windows platform (version 4.4.5 as of this writing) without a roll-back initiating.

It took me a while to reach sucess, so I am posting this in case it helps anyone else with a similar issue.

Whatever Node.js version you have installed, run its installer again. It asks you to remove Node.js like this: 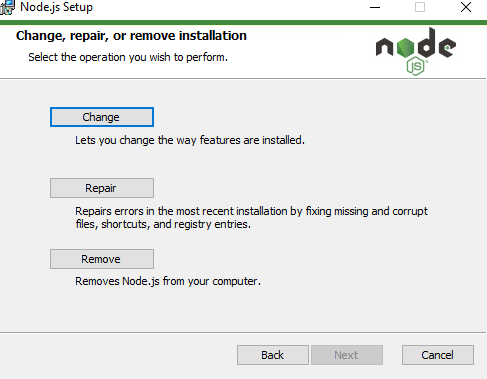 The uninstalled was failing with the error:

I ended up going to the Downloads folder right-clicking the node-v8.2.1-x64 MSI and selecting uninstall.. this worked.

In my case, the above alone didn't work. I had installed and uninstalled several versions of nodejs to fix this error: npm in windows Error: EISDIR, read at Error (native) that I kept getting on any npm command I tried to run, including getting the npm version with: npm -v.

So the npm directory was deleted in the nodejs folder and the latest npm version was copied over from the npm dist: and then everything started working.

I came here because the Remove button was not available from Add/Remove programs. It was saying "Node.js cannot be removed".

I had the same problem with me yesterday and my solution is: 1. uninstall from controlpanel not from your cli 2. download and install the latest or desired version of node from its website 3. if by mistake you tried uninstalling through cli (it will not remove completely most often) then you do not get uninstall option in cpanel in this case install the same version of node and then follow my 1. step

The best thing to do is to remove Node.js from the control panel. Once deleted download the desired version of Node.js and install it and it works.

Not the answer you're looking for? Browse other questions tagged node.js windows npm windows-7-x64 or ask your own question.

2670
Is there an equivalent of 'which' on the Windows command line?
1678
How do I debug Node.js applications?
2803
How do I pass command line arguments to a Node.js program?
2689
How do I install pip on Windows?
2192
How to decide when to use Node.js?
2144
How to exit in Node.js
1611
How do I completely uninstall Node.js, and reinstall from beginning (Mac OS X)
1356
How can I uninstall npm modules in Node.js?
2402
How to update each dependency in package.json to the latest version?