When using Eclipse (Kepler, on Windows 7 64 bit) from time to time some of the open tabs... disappear. The tab bar is still there, but some tabs just go blank. When I mouse over them tho, they come back and become fully visible.

So this is not a functional problem, just an aesthetic one, but it's really disturbing not to be able to see what tabs are open. Does anyone know how to stop this behavior?

It happens often, but is not prompted by anyhing I do, so I cannot recreate it at will. To further clarify what it looks like, I put together this image in Paint.net:

I found out what's prompting this behavior. When I build and run the project, the console pops up, then after closing the window, the console automatically hides again, but the tabs it was covering are blank. However, as stated earlier, they do come back if I hover over them. However, I still do not know how to fix this. Here is a gif composed of screenshots showing this behavior in-action:

Its is difficult for me to reproduce your problem on my machine. However you can try these

I was also seeing this. Here's my specific situation. I'm running Eclipse Oxygen on Windows 10. For my external monitor, I went into display settings and set 'Change the size of text, apps, and other items' to 125%. This caused the application to render text awkwardly. I then right-clicked on the desktop shortcut and selected Properties. Under the Compatability tab, I enabled the 'Override high DPI scaling behavior', and I selected 'Scaling performed by: System (Enhanced)'.

This configuration caused me to experience the behaviour that you reported.

Altering the selection of 'Scaling performed by' to System fixed my issue.

I've successfully fixed that on a UHD monitor by selecting the Classic Theme under Preferences -> General -> Appearance. It is still (not) working as described in the question with the Light Theme.

I had the same issue with my Eclipse Jee 2018-09 on Windows 10. To fix this issue try the following steps: right click on eclipse icon -> Compatibility -> Change High DPI settings 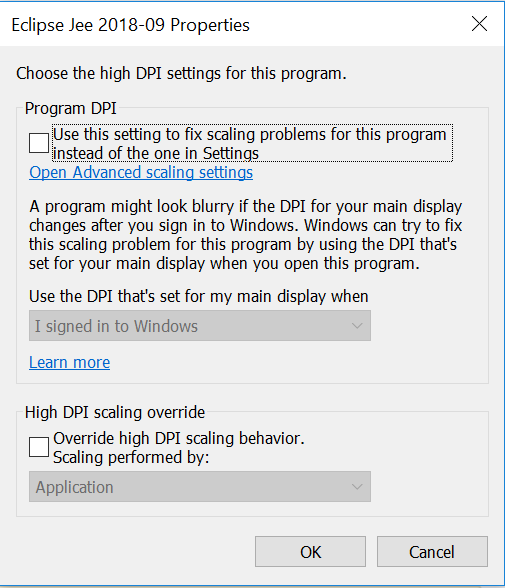 I had the same issue when I have switched back from an installed custom dark theme on Eclipse Mars.2 Release (4.5.2), So here is how I have fixed it:

go to Window->Preferences->Appearance then change theme to different them than classic (Dark in my case) then select the classic again.

1276
How can you speed up Eclipse?
902
How do I change Eclipse to use spaces instead of tabs?
743
How can I show line numbers in Eclipse?
606
Eclipse/Java code completion not working
1260
'Must Override a Superclass Method' Errors after importing a project into Eclipse
1912
“Debug certificate expired” error in Eclipse Android plugins
681
Eclipse HotKey: how to switch between tabs?
721
Does a “Find in project…” feature exist in Eclipse IDE?
976
Can't start Eclipse - Java was started but returned exit code=13
71
Eclipse tabs repositionning