How to check if a stored procedure exists before creating it

I've read that dropping before creating works, but I don't like doing it that way.

How can I add check for the existence of a stored procedure and create it if it doesn't exist but alter it if it does exist?

I realize this has already been marked as answered, but we used to do it like this:

Just to avoid dropping the procedure.

You can run procedural code anywhere you are able to run a query.

Just copy everything after AS:

This code does exactly same things a stored proc would do, but is not stored on the database side.

That's much like what is called anonymous procedure in PL/SQL.

Your question title is a little bit confusing.

If you only need to create a procedure if it not exists, then your code is just fine.

Here's what SSMS outputs in the create script:

Example of how to do it when including the schema:

In the example above, dbo is the schema.

If you're looking for the simplest way to check for a database object's existence before removing it, here's one way (example uses a SPROC, just like your example above but could be modified for tables, indexes, etc...):

This is quick and elegant, but you need to make sure you have unique object names across all object types since it does not take that into account.

I know you want to "ALTER a procedure if it exists and create it if it does not exist", but I believe it is simpler to:

The second parameter tells OBJECT_ID to only look for objects with object_type = 'P', which are stored procedures:

You can get the full list of options via:

I know it is a very old post, but since this appears in the top search results hence adding the latest update for those using SQL Server 2016 SP1 -

This creates a Stored Procedure if does not already exist, but alters it if exists.

DROP IF EXISTS is a new feature of SQL Server 2016

I had the same error. I know this thread is pretty much dead already but I want to set another option besides "anonymous procedure".

Here's a method and some reasoning behind using it this way. It isn't as pretty to edit the stored proc but there are pros and cons...

UPDATE: You can also wrap this entire call in a TRANSACTION. Including many stored procedures in a single transaction which can all commit or all rollback. Another advantage of wrapping in a transaction is the stored procedure always exists for other SQL connections as long as they do not use the READ UNCOMMITTED transaction isolation level!

1) To avoid alters just as a process decision. Our processes are to always IF EXISTS DROP THEN CREATE. If you do the same pattern of assuming the new PROC is the desired proc, catering for alters is a bit harder because you would have an IF EXISTS ALTER ELSE CREATE.

2) You have to put CREATE/ALTER as the first call in a batch so you can't wrap a sequence of procedure updates in a transaction outside dynamic SQL. Basically if you want to run a whole stack of procedure updates or roll them all back without restoring a DB backup, this is a way to do everything in a single batch.

In Sql server 2008 onwards, you can use "INFORMATION_SCHEMA.ROUTINES"

Here is the script that I use. With it, I avoid unnecessarily dropping and recreating the stored procs.

In addition to the answer from @Geoff I've created a simple tool which generates a SQL-file which statements for Stored Procedures, Views, Functions and Triggers. 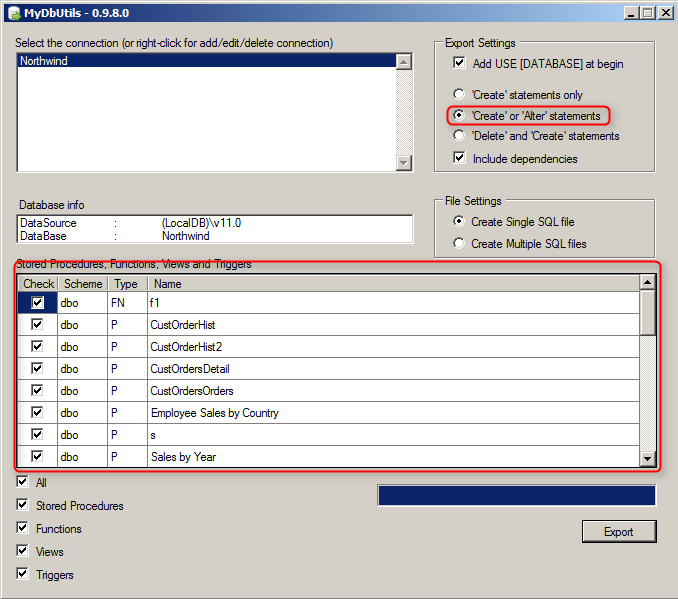 I wonder! Why i don't write the whole query like

CREATE Procedure IF NOT EXISTS 'Your proc-name' () BEGIN ... END

WartariWartari
1
1
Add a comment  |
Highly active question. Earn 10 reputation (not counting the association bonus) in order to answer this question. The reputation requirement helps protect this question from spam and non-answer activity.