What is the master branch and release branch for?

The "Master branch" is for a product which is ready and can be downloaded by end-users.

But there are "release branches" - I have no ideas who these branches are for. Release for customers? For QA? 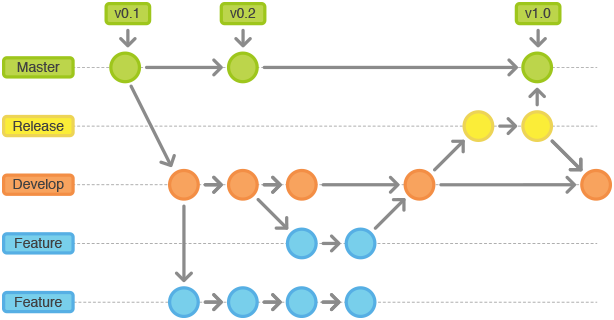 Once develop has acquired enough features for a release (or a predetermined release date is approaching), you fork a release branch off of develop. Creating this branch starts the next release cycle, so no new features can be added after this point.Only bug fixes, documentation generation, and other release-oriented tasks should go in this branch(which includes testing also). Once it's ready to ship, the release gets merged into master and tagged with a version number. In addition, it should be merged back into develop, which may have progressed since the release was initiated.

Using a dedicated branch to prepare releases makes it possible for one team to polish the current release while another team continues working on features for the next release. It also creates well-defined phases of development (e.g., it's easy to say, “this week we're preparing for version 4.0” and to actually see it in the structure of the repository).

Master is a permanent branch which always reflects a production-ready state. So yes, it is for ready-product which can be downloaded on the market by user.

Release is a temporal supporting branch to support preparation of a new production release. This means mainly bug fixing, documentation, etc as pointed out by minas.

In the diagram which you linked to, yes, master is used for a "ready product" which is released to users. (Not everybody uses master this way, though.)

Once they are ready to go public with a new version of the product, they merge the "release" branch into master and tag the commit which is used to build the publicly downloadable product. (If they are releasing version 1.0, they might tag the commit 1.0, and so on.)

At the same time, as they work on new features, they create new "feature" branches (branching out of develop) and commit onto them. When a new feature is working, they merge its branch back into develop. develop is always moving forward.

Not the answer you're looking for? Browse other questions tagged git git-flow or ask your own question.

6
gitflow why do we need master
1
Why are release branches made from develop and not master branch?

3841
Undoing a git rebase
1334
How can I know if a branch has been already merged into master?
13183
What is the difference between 'git pull' and 'git fetch'?
2267
Showing which files have changed between two revisions
5945
Move the most recent commit(s) to a new branch with Git
19183
How do I delete a Git branch locally and remotely?
1420
Create a branch in Git from another branch
2490
What is the best (and safest) way to merge a Git branch into master?
1774
Remove tracking branches no longer on remote
2802
Git fetch remote branch