How to fix "Error - Failed to execute tools\android.bat, error 2 " in Android?

When i click on AVD Manager, i am getting an error as in the screenshot below.

Referred to the following links. But none of the solution works for me.

In Tools -> Lib Folder i have my AVD Manager.

In Tools -> i have android.bat

I tried the following options and it did not work.

Please find below the error screenshot.

Kindly let me know if any thoughts.

My android.bat file was missing when updating the particular SDK package and my computer suddenly shut down. Thus, my tools folder became empty. 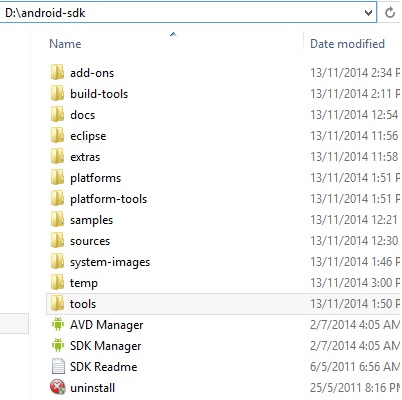 You can recover your android.bat file from temp folder 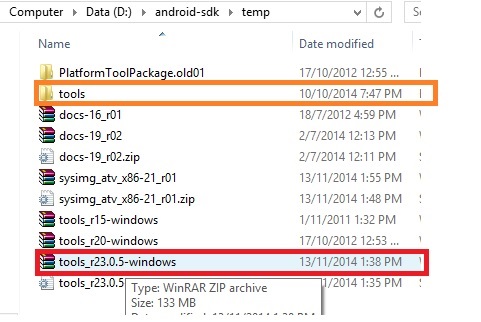 In my case, the problem was solved this way. Hope this helps.

There are apparently some programs that modify this, which in turn break these Android tools (and presumably other programs that rely on .bat files as well).

To check this, in a command window, type

The resulting value should probably be C:\Windows\System32\cmd.exe

If you have multiple exes jammed in there, or if the variable ends with a semicolon, you've got a broken COMSPEC variable. If so, please edit your system's environment variables and fix it, setting it to the cmd.exe path above.

I got the same problem and I found where it's come from. I know it's a 2 year question, but the problem still remain the same for some people.

It will happen when we re-install android studio for some reasons. I even re-installed it 4 times. Problem came at the first time I re-installed. I tried to re-install again and again but the problem remain the same.

Finally I open C:\Users\Hp\AppData that actually hidden. And in the next folder \local\Android\Sdk, now I found some folder Sdk, Sdk1, Sdk2, and Sdk3.

Now I remember, as I re-installed it 4 times, that's why I have four folders. I remove ( not actually remove, but rename it with additional XX at the end of folder name) Sdk folder and change Sdk3 to Sdk. Now everything is working fine.

Why? because my last re-install create Sdk3 folder that contain android.bat required for the main program where no more exist in the first Sdk folder.

Before I got this as well :

And now it's missing and the problem is solved.

If you happen got the same problem with me. hope it could help you.

* JAVA PATH is in your java sdk folder

and delete these two lines:

Then when android.bat runs, it prints:

Yet it DOES run the SDK manager.

I suspect the 'find' line is broken. If you have a 64 bit system, try setting arch_ext to 64 and test that.

In my case.Android root folder was readonly. -->Remove readonly tick

I had this problem and downloaded tools_r25.2.3-windows.zip file. I think this problem caused on updating tools. I deleted tools to update but this error occured when I installed. Be careful updating.

My situation: Right after installing Android support into Visual Studio, the "Open Android Emulator Manager (AVD)" button was broken and running C:\Program Files (x86)\Android\android-sdk\tools\lib\AVD Manager.exe produces the error shown by the OP. The screenshot in yean's answer shows an android-sdk folder that contains AVD Manager.exe, but my android-sdk folder did not contain any files (only folders).

Crazy as it sounds, simply copying AVD Manager.exe from android-sdk\tools\lib to android-sdk fixes both problems. (I couldn't create an API-18 arm emulator but API-19 worked.)

That resolved my issue

Happened several times on my environment. @Mahmood and @Qwertie solutions did help, until today.

Banged my head the whole afternoon searching & trying many solutions... finally this one unlocked the situation:

Check that if the tools folder is missing in /sdk folder. If so, just unzip again from the zip package to the /sdk folder again. It works like charm for my case.

i think it occurs when i accidentally hit delete packages button.

4105
How do you close/hide the Android soft keyboard programmatically?
3038
How to stop EditText from gaining focus at Activity startup in Android
1954
"Debug certificate expired" error in Eclipse Android plugins
2570
How can I fix 'android.os.NetworkOnMainThreadException'?
340
What are the Android SDK build-tools, platform-tools and tools? And which version should be used?
615
Update Eclipse with Android development tools v. 23
541
Automatically accept all SDK licences