I want a diff of all changes in a branch that is not merged to master yet.

However, in each of these cases the diff contains content in master that has not been merged into my branch yet.

Is there a way to do a diff between my branch and master that excludes changes in master that have not been merged into my branch yet?

Merge base is the point where branch diverged from master.

Git diff supports a special syntax for this:

You must not swap the sides because then you would get the other branch. You want to know what changed in branch since it diverged from master, not the other way round.

You may want to replace branch in this syntax with HEAD or even delete it completely -- both the following display the content of the current branch since it diverged from master:

Note that .. and ... syntax does not have the same semantics as in other Git tools. It differs from the meaning specified in man gitrevisions.

Just in case you are doing something exotic, it should be noted that all of the <commit> in the above description, except in the last two forms that use ".." notations, can be any <tree>.

This shows only the changes between my currently selected local branch and the remote master branch, and ignores all changes in my local branch that came from merge commits.

As also noted by John Szakmeister and VasiliNovikov, the shortest command to get the full diff from master's perspective on your branch is:

This uses your local copy of master.

To compare a specific file use: 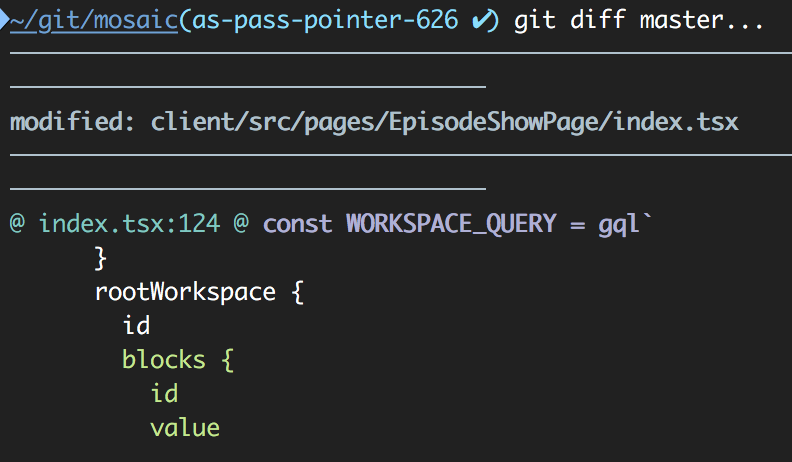 In git diff - There's a significant difference between two dots .. and 3 dots ... in the way we compare branches or pull requests in our repository. I'll give you an easy example which demonstrates it easily.

Example: Let's assume we're checking out new branch from master and pushing some code in.

Put git diff between branches/commitIDs to one patch file (it is ok only if no files was deleted or created) and then apply it in the new branch.

where abcde123 is commit ID in master where no unwanted changes present yet.

Basically, you do not need master for that. You can compare current commit to any commit in your current branch, e.g. the last commit before you started changes.

564
Finding a branch point with Git?
39
How can I see what branch another branch was forked from?
33
Why doesn't `git diff` invoke external diff tool?
1
Generate a diff of all changes made in a branch?
-4
git diff specific file my-branch to master

4056
Undoing a git rebase
13515
What is the difference between 'git pull' and 'git fetch'?
2308
Showing which files have changed between two revisions
2506
How do I show the changes which have been staged?
19888
How do I delete a Git branch locally and remotely?
2001
Make the current Git branch a master branch
2050
How to compare files from two different branches
3872
Message 'src refspec master does not match any' when pushing commits in Git
2567
How do I safely merge a Git branch into master?