I'm trying to create a simple android project with gradle. I work in a computer with Debian GNU/Linux 7 'wheezy'.

I followed the recomendations in Gradle Plugin User Guide - Android Tools Project Site, but it casts an error:

I followed the specifications:

I also started a project anew, and the results I showed were issued by the command gradle tasks as shown in the documentation.

Even this question was not usefull, since it solved with 'upgrading' to gradle 1.6 (I understand that plugin 0.7 requires at least gradle 1.9).

I tried this after failing with the same error in android-studio and IntelliJ Idea.

EDIT: I also tried with new projects in both IDEs, and got the same issue. But what most surprises me is that both IDEs use gradle 1.8 in their wrapped form. I tried to cinfigure both of them to use my local gradle install, but still the same issue.

What am I doing wrong? Is it a bug? How can I avoid the problem?

EDIT: Here is my build.gradle

Google made a mistake with version 0.7.2 of the Gradle plugin:

Release 0.7.3 re-enables Java6 support. Declaring Gradle 0.7.3 in my build files does indeed resolve this for me.

No one is perfect :)

If you're using the command line to create the project like so:

The project is created to use version 1.2.2 of the android-gradle-plugin, but the project is initialised with gradle 1.12, which isn't compatible.

To fix it, do the following:

And it all works again.

If you are attempting to update your Gradle 1.9 project to Gradle 1.10 using

and command ./gradlew wrapper you will get the same error as above.

Solution is to install Gradle 1.10 onto your machine and upgrade your project not using the wrapper

You can also get this error if you update your system gradle and forget to update the Android Studio gradle home.

I got this today when running gradle assembleRelease. I had installed the Ubuntu default of gradle-1.4. This didn't work, so I tried the latest gradle-1.12 and got the same issue.

Downloading and using gradle-1.10 (and matching my gradle-wrapper.properties file to that version) resolved the issue.

Ok i guess android studio has answer for this to get this bug out using GUI,

after updating the plugins i was facing another issues while building,

so changes the gradle setting to default as shown in the image, 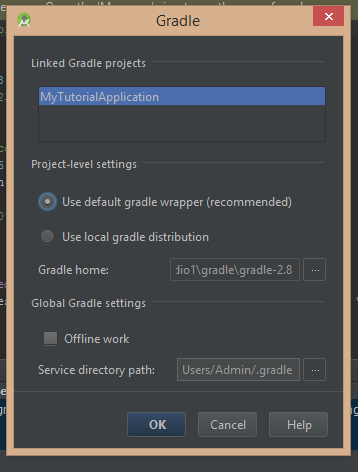 After this build was successful.

Not the answer you're looking for? Browse other questions tagged android gradle or ask your own question.