A lot of Emacs functions automatically split the screen. However, they all do so such that the windows are one on top of the other. Is there any way to make them split such that they are side-by-side by default instead?

Put any one in you .emacs/init.el file. You can change the "100" to the value you like, depending on you screen.

If you got two windows in one frame, and you want to change the layout from vertical to horizontal or vice verse, here is a solution:

Put it in your .emacs/init.el file, Use C-x 4 t to toggle the layout of your windows.

Sometimes we need change between Horizontal and Vertical according current display and our requirement (more lines or more columns).

I recommand the great ToggleWindowSplit, And I bind key to "C-c y"

the simple answer of setting 2 variables to nil and 0 didn't work for me, so I wrote 2 simple functions: one just splits the window into NX vertical buffers and opens files named (for example) file.1 file.2 ... file.NX in each and another one does the same think, except does it in 2D (NY rows by NX columns for opening files f.1 f.2 ... f.[NX*NY]). To install, add this code to .emacs: 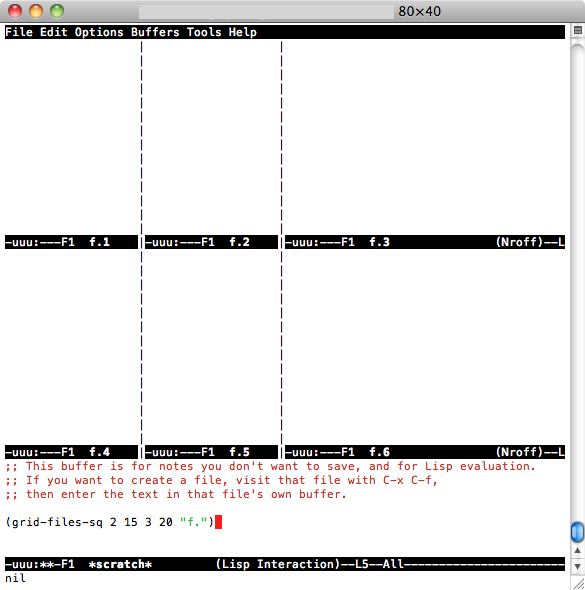 This probably can be done better/more efficiently, but it's a start and it does what I need it to do (display a bunch of sequentially named small files). Feel free to improve or reuse.

I use multiple frames (OSX windows) in emacs regularly for different projects. Here's how I setup a few frames initially split to a left and right window.

Not the answer you're looking for? Browse other questions tagged emacs or ask your own question.

171
Using Emacs as an IDE
215
Using Emacs to recursively find and replace in text files not already open
168
Emacs - Multiple columns one buffer
142
How do I byte-compile everything in my .emacs.d directory?
726
Differences between Emacs and Vim
186
How to have Emacs auto-refresh all buffers when files have changed on disk?
103
How to swap the buffers in 2 windows emacs
60
How to switch between visible buffers in emacs?
176
How to change size of split screen emacs windows?