i have some problems installing Laravel 4.1 in Windows 7 via the first method explained in the Laravel documentation ( http://laravel.com/docs/installation#install-laravel ).

So I downloaded the laravel.phar file and put it in my path ( System32 ). Which would be the equivalent of /usr/bin in linux based systems?

( I also added .PHAR in the PATHEXT system variable ).

When i ran the laravel command from the command line it didn't know how to open it, so i chose to open it with php.exe. Now, when I run the composer command it says: "Could not open input file: C:\Windows\system32\laravel.phar".

I suppose it's less a problem with laravel itself but my limited knowledge of the Windows command line. The installation via composer works fine.

To rephrase and clarify this question: How do I make a .phar file globally available to the Windows command line?

Phar allows you to put an entire PHP application into a PHP Archive. It is not a direct executable as you may assume.

To install Laravel 4.1 successfully on Windows 7, you need Composer -a package manager. First install Composer. This will install globally on your system. Composer can now be called through your command prompt via 'composer'.

Next, go to where your WAMP or XAMP project folder is -generally, this would be your www folder (i.e. C:\wamp\www).

Make a new project directory: www\new_project. Now go to your start menu and run cmd as admin. Next you need to change your directory to the C drive and then into your www\new_project folder:

Now you can take advantage of composer by calling:

Call the above statement in that new_project folder because that is where laravel will install. The above will make your directory path as:

Laravel is now available on your system. You can verify a successful install by going to:

Based on the above question edit regarding making a .phar globally available for command:

The directory your looking for is C:\bin --the equivalent folder to /usr/bin on Linux. Copy the laravel.phar file in the C:\bin folder. Or , you can put it in a folder, such as, C:\php\laravel.phar. Then you need to make a batch file somewhere within the PATH called laravel.bat which will then do the following:

The "%*" repeats all of the arguments passed to the shell script. Thus, you can run 'laravel new project'. Hope this points you in the right direction.

The documentation on the Laravel website is not a good way to install laravel on windows. You'll got problem with the routing later.

to get a better URL you must setup Apache Virtual Host and edit hosts file.

The best way to install Laravel on windows is to use Git and Composer. if you already successfully install Git and Composer, open Git bash and using ls and cd terminal command go to c:\xampp\htdocs folder 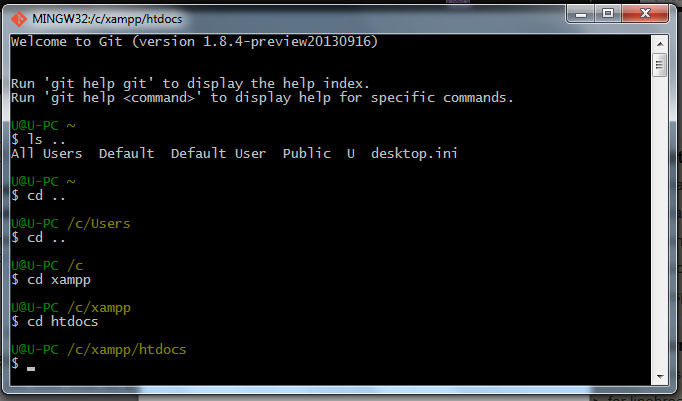 and run this command (it will ask you for your Git passphrase, make sure you install your Git properly - tutorial here - http://www.thegeekstuff.com/2012/02/git-for-windows/):

It will download laravel into a folder name laraveldev in htdocs:

Use the Git bash terminal to install laravel into PHP using this command:

installing laravel is easy way with composer, if you cant use composer, than you can go with laravel.phar file. This method is also easiest way to install laravel on your local machine.

I think it will be useful to install using laravel.phar file.

Not the answer you're looking for? Browse other questions tagged php command-line windows-7 laravel-4 phar or ask your own question.