Why don't I see any main method in this java dynamic web project?

Now, I've seen spring being used in enterprise applications and always wondered where the main method was and how everything worked? And whenever I would go to spring tutorial they'll start with beanFactory and Contexts and what not, all in a main java method and from there just keep getting beans as required. This is totally different from what I see in the applications.

Can someone tell me how exactly does spring work in this case. What is the sequence of calls. I guess there will be some hidden main method somewhere but I am not sure of that.

Normally if I were to run a simple java project from command line, I'd do java mainClass. Now how would it happen in this case.

Web applications don't have a main; the 'program' that is running is actually the web container (Apache Tomcat, Glassfish, JBoss, Weblogic, whatever) and that program will service the web application(s) you deploy into it. You might want to read the JEE tutorial to learn and understand what a Java web environment is.

You can still see the main method being called by using the debugger like this:

This is an example with jetty: 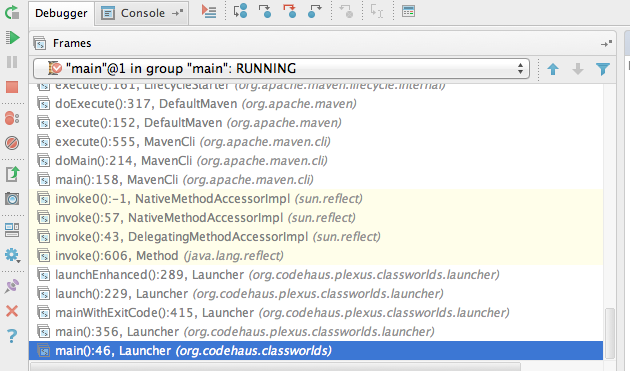 To see this we need to put the breakpoint in an initialization method so that we get the main thread of the application.

Putting the breakpoint in the processing of a request instead of an initialization method would show Thread.run() at the bottom of the stack trace and not main().

Thread.run() is the equivalent of the main method for threads other than the main thread.

So the main method still exists, it's just being handled at the level of the container.

You don't see any explicit main method just because it is a Web project. This project is built into a web application archive (WAR) file which is deployed into a web server / servlet container, e.g. Tomcat in this tutorial.

Web applications does not have to contain main methods. This is because you don't need to explicitly start any Java process from within your webapp. Somewhere in its depths, Tomcat calls a main method of the code it has been built from. This happens at server startup time.

Then, it will bind your code to incoming HTTP calls, but it will not start new processes for that. It will rather start new threads.

If you've created a basic program in Java then you must know that every Java program has a main() method, which is the starting point of the program. So, how come servlets don't have a main()? That is because servlets are served using via Web containers. Web container will perform all underlying work on behalf of servlet so programmer can focus on business logic. When a client requests a servlet, server hands requests to a Web container where the servlet is deployed.

Not the answer you're looking for? Browse other questions tagged java spring jakarta-ee or ask your own question.

4
Main method in a Java application
0
What is the class that is executed at the start of a JAVA EE WildFly project?

517
Why is the Java main method static?
1531
Fastest way to determine if an integer's square root is an integer
526
Why can't I define a static method in a Java interface?
828
Access restriction on class due to restriction on required library rt.jar?
860
Efficiency of Java “Double Brace Initialization”?
997
Can't start Eclipse - Java was started but returned exit code=13
621
Ways to iterate over a list in Java
181
Spring Boot: Unable to start EmbeddedWebApplicationContext due to missing EmbeddedServletContainerFactory bean
1142
How to install Java 8 on Mac
770
Why does array[idx++]+=“a” increase idx once in Java 8 but twice in Java 9 and 10?