I am getting this error while trying to connect to the SQL Server.

Can anybody tell me what the error code means?

If you're trying to connect using "SQL Server Authentication" then you may want to modify your server authentication:

Within the Microsoft SQL Server Management Studio in the object explorer:

Check out this blog article from the data platform team.

You really need to look at the state part of the error message to find the root cause of the issue.

Afterwards, Google how to fix the issue.

Before opening, right-click and choose 'Run as Administrator'. This solved the problem for me.

I have faced this issue.

Please look at the attached image,

and restart your Sql server. 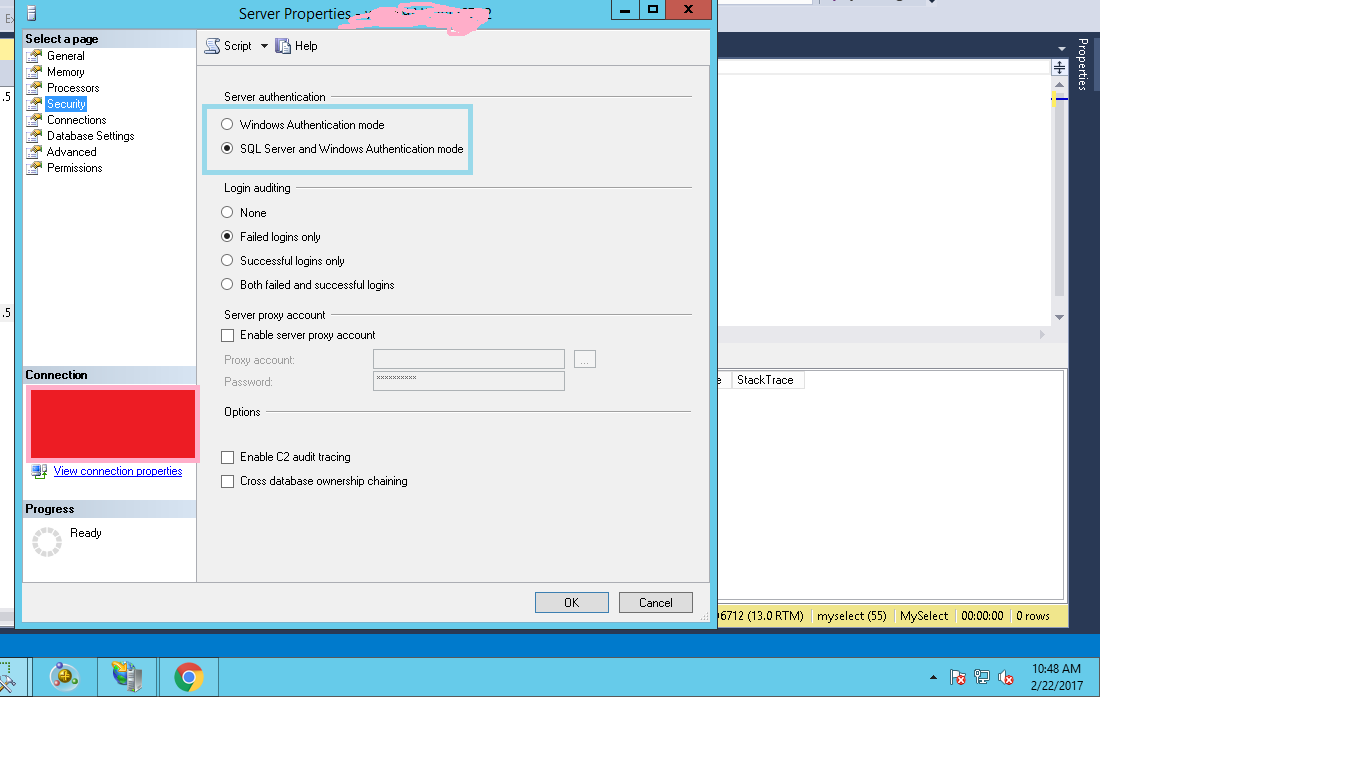 first see the details of the error if "state" is "1" Ensure the database is set for both SQL and Windows authentication under SQL server / Properties / Security.

for other state see the above answers ....

Just happened to me, and turned out to be different than all other cases listed here.

I happen to have two virtual servers hosted in the same cluster, each with it own IP address. The host configured one of the servers to be the SQL Server, and the other to be the Web server. However, SQL Server is installed and running on both. The host forgot to mention which of the servers is the SQL and which is the Web, so I just assumed the first is Web, second is SQL.

When I connected to the (what I thought is) SQL Server and tried to connect via SSMS, choosing Windows Authentication, I got the error mentioned in this question. After pulling lots of hairs, I went over all the setting, including SQL Server Network Configuration, Protocols for MSSQLSERVER:

Double clicking the TCP/IP gave me this: 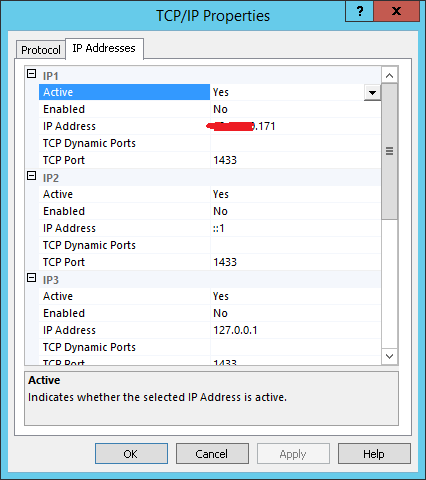 The IP address was of the other virtual server! This finally made me realize I simply confused between the servers, and all worked well on the second server.

If you change a login user credential or add new login user then after you need to log in then you will have to restart the SQL Server Service. for that 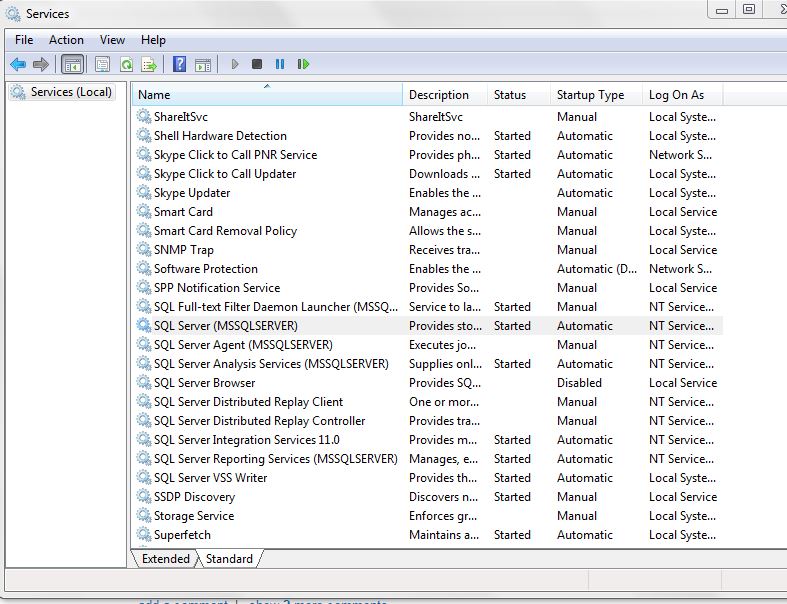 Then go to SQL Server(MSSQLSERVER) and stop and start again

Now try to log in, I hope You can.

Right Click the User, go to properties, change the default database to master This is the screen print of the image which shows what you have to check if you have the error 19456. Sometimes it default to a database which the user doesn't have permission

Potential causes Below is a list of reasons and some brief explanation what to do:

SQL Authentication not enabled: If you use SQL Login for the first time on SQL Server instance than very often error 18456 occurs because server might be set in Windows Authentication mode (only).

How to fix? Check this SQL Server and Windows Authentication Mode page.

Invalid userID: SQL Server is not able to find the specified UserID on the server you are trying to get. The most common cause is that this userID hasn’t been granted access on the server but this could be also a simple typo or you accidentally are trying to connect to different server (Typical if you use more than one server)

Invalid password: Wrong password or just a typo. Remember that this username can have different passwords on different servers.

less common errors: The userID might be disabled on the server. Windows login was provided for SQL Authentication (change to Windows Authentication. If you use SSMS you might have to run as different user to use this option). Password might have expired and probably several other reasons…. If you know of any other ones let me know.

18456 state 1 explanations: Usually Microsoft SQL Server will give you error state 1 which actually does not mean anything apart from that you have 18456 error. State 1 is used to hide actual state in order to protect the system, which to me makes sense. Below is a list with all different states and for more information about retrieving accurate states visit Understanding "login failed" (Error 18456) error messages in SQL Server 2005

Also you can just login with windows authentication and run the following query to enable it:

Please check to see if you are connected to the network if this is a domain member PC. Also, make sure you are not on a dual home PC as your routes may be incorrect due to network metrics. I had this issue when I could not connect to the domain the SQL windows authentication switched to the local PC account but registered it as a SQL authentication. Once I disabled my wireless adapter and rebooted, the Windows integration switched back to the domain account and authenticated fine. I had already set up Mixed mode as you had already done as well so the previous posts do not apply.

Just an update, here is the solution if anyone else has there error with a properly configured login:

If you're trying to connect using "SQL Server Authentication" then you may want to modify your server authentication:

Within the Microsoft SQL Server Management Studio in the object explorer:

Go to the Security page

I believe this can happen if you are trying to log in with a user that is defined in Active Directory, but attempt using "SQL Server Authentication" in the login screen. I do not know how to specify a different user with NTLM/Windows Authentication: When I click the Windows Authentication dropdown, the username and password is blanked out, and I can only log in as myself.

In my case multiple wrong attempts locked the account.To do that I had tried running the below query and it worked: ALTER LOGIN WITH PASSWORD= UNLOCK And make sure to set the option "Enforce Password Security" option for specific user to be unchecked by right click on Sql Server -> Properties.

In case you are not able to connect with SQL Authentication and you've tried the other solutions.

You may try the following:

The state of the login

"You don't look at the right place" or "what you see is not what you think".

The Local DB and SQLEXPRESS conflict

If you connect with SSMS with Windows authentication, and your instance is named SQLEXPRESS, you are probably looking at the LocalDb and not the right server. So you just created your login on LocalDb.

When you connect through SQL Server authentication with SSMS, it will try to connect to SQLEXPRESS real server where your beloved login doesn't exist yet.

Additional note: Check in the connection parameters tab if you've not forgotten some strange connection string there.

uncheck the password verification three checkboxes . This will work.

I got this error after creating a new sysadmin user under my SQL instance. My admin user was created under a specific domain MyOrganization/useradmin

Using useradmin on a disconnected environment allows you to create other users using SQL Server authentication, but as soon as you try to login you get

To fix the problem, try to connect again to your Organization network and create the user while you are connected and then you can get disconnected and will work.

I have faced the same issue. In case you see it, run this query:

Do one thing again run same query after reconnecting SQL server. It will work fine.

Click on "Options" and under "Connection Properties" specify the catalog/database name next to "Connect to database:". I got the error because this was set to <default> and I needed to specify the dbname.

Not the answer you're looking for? Browse other questions tagged sql-server connection error-code or ask your own question.