How to rotate a vector by a given direction

I'm creating some random vectors/directions in a loop as a dome shape like this: 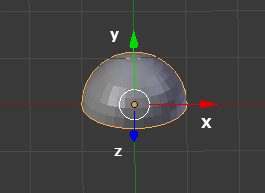 Now I want to rotate the vec-Vector by a given direction-Vector like (1,0,0). This should rotate the "dome" to the x-direction like this: 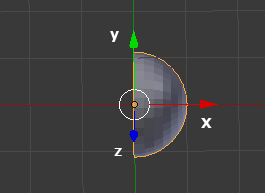 How can I achieve this? (preferably with glm)

A rotation is generally defined using some sort of offset (axis-angle, quaternion, euler angles, etc) from a starting position. What you are looking for would be more accurately described (in my opinion) as a re-orientation. Luckily this isn't too hard to do. What you need is a change-of-basis matrix.

First, lets just define what we're working with in code:

To calculate the matrix, you need to create unit vectors for each of the new axes. From the example above it becomes apparent that you want the vector provided to become the new Y-axis:

Now, calculating the X and Z axes will be a tad more complicated. We know that they must be orthogonal to each other and to the Y axis calculated above. The most logical way to construct the Z axis is to assume that the rotation is taking place in the plane defined by the old Y axis and the new Y axis. By using the cross-product we can calculate this plane's normal vector, and use that for the Z axis:

Technically the normalization isn't necessary here since both input vectors are already normalized, but for the sake of clarity, I've left it. Also note that there is a special case when the input vector is colinear with the Y-axis, in which case the cross product above is undefined. The easiest way to fix this is to treat it as a special case. Instead of what we have so far, we'd use:

For the X-axis, we can cross our new Y-axis with our new Z-axis. This yields a vector perpendicular to both of the others axes:

Again, the normalization in this case is not really necessary, but if y or z were not already unit vectors, it would be.

Finally, we combine the new axis vectors into a basis-change matrix:

Multiplying a point vector (vec3 vec) by this yields a new point at the same position, but relative to the new basis vectors (axes):

Do this last step for each of your randomly generated points and you're done! No need to calculate angles of rotation or anything like that.

As a side note, your method of generating random unit vectors will be biased towards directions away from the axes. This is because the probability of a particular direction being chosen is proportional to the distance to the furthest point possible in a given direction. For the axes, this is 1.0. For directions like eg. (1, 1, 1), this distance is sqrt(3). This can be fixed by discarding any vectors which lie outside the unit sphere:

This would ensure that all directions have equal probability, at the cost that if you're extremely unlucky, the points picked may lie outside the unit sphere over and over again, and it may take a long time to generate one that's inside. If that's a problem, it could be modified to limit the iterations: while (++i < 4 && ...) or by increasing the radius at which a point is accepted every iteration. When it is >= sqrt(3), all possible points would be considered valid, so the loop would end. Both of these methods would result in a slight biasing away from the axes, but in almost any real situation, it would not be detectable.

Putting all the code above together, combined with your code, we get:

You need to create a rotation matrix. Therefore you need a identity Matrix. Create it like this with

Now your can rotate the vectorspacec with

This will rotate the vectorspace by 45.0 degrees around the z-axis (as shown in your screenshot). Now your almost done. To rotate your vec you can write

Note: Because you have a 4x4 matrix you need a vec4 to multiply it with the matrix. Generally it is a good idea always to use vec4 when working with OpenGL because vectors in smaller dimension will be converted to homogeneous vertex coordinates anyway.

EDIT: You can also try to use GTX Extensions (Experimental) by including <glm/gtx/rotate_vector.hpp>

To get your rotation matrix. The cross product returns a vector that is orthogonal to "up" and "direction" and that's the one you want to rotate around. Hope this will help.

Not the answer you're looking for? Browse other questions tagged opengl matrix linear-algebra glm-math or ask your own question.

6
OpenGL object glossy/shiny in Mac OS X 10.6, but not 10.5. Why?
1
Direction of rotation in GLM matrix, using quaternions
0
print out the position of vertices after rotation
2
Why does my vector not rotate correctly OpenGL/GLM?
0
Cone from direction vector
3
OpenGL - Local Up and Right From Matrix 4x4?