Using Powershell as terminal in IntelliJ IDEA IDEs like PyCharm, PHPStorm or RubyMine

I have been attempting to run powershell as my terminal on windows in pycharm, so I did the following: 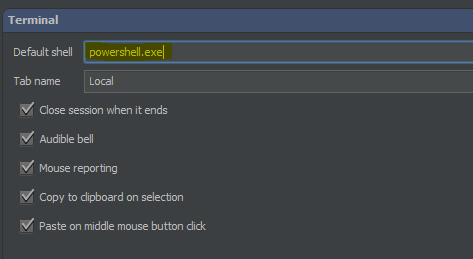 However, when I try this, it says that it cannot execute my scripts, and hence I get the following error: SecurityError and the Fully Qualified Id is : UnAuthorizedAccess.

This arises from the fact that pycharm's terminal cannot execute my Powershell_profile.ps1 profile file.

How can I successfully run Pycharm's terminal with Powershell?

What I have tried so far, is going into my main powershell directory as in %windir%/system32/WindowsPowerShell/1.0/profile.ps1, and then change it to include the following:

However, this does not help, and I get the same error when I try to open of pycharm's terminal.

I have also tried to run pycharm as Admin, however this does not solve the problem either, and I get the same aforementioned error.

I've replaced cmd.exe with powershell.exe in a simpler way and hope it can help. I'm using webstorm2017 and Win10 os.

1.Find the exact location of powershell.exe.In mine and I believe in most computers the location would be C:\Windows\System32\WindowsPowerShell\v1.0\powershell.exe.Copy the whole path into your clipboard.

2.In your IDE open File=>Setting=>Tools=>Terminal, and paste the path into "Shell path" blank.

3.Restart the IDE and everything would be ok.

Step 3 is from ebelanger's answer. 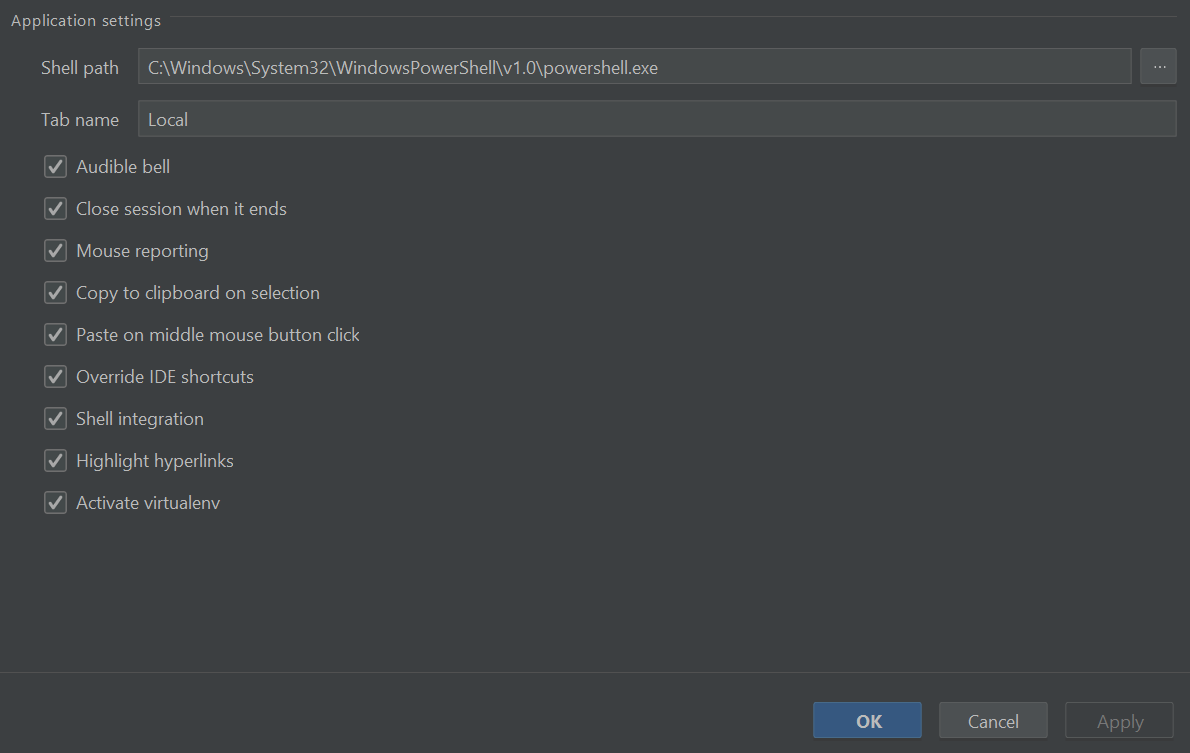 Browse to the PowerShell executable, right-click, run as administrator.

From the prompt, use the same command you tried:

Once that is done, close PowerShell, and attempt to use it again from your application.

If you're running on Windows 8 x64 then running both the commands below may help. It worked for me.

Credit to a comment found here: Powershell on Windows 7: Set-ExecutionPolicy for regular users

As mentioned in other answers, if after setting powershell.exe as your terimal in IntelliJ → Settings → Tools → Terminal → Shell path it throws UnAuthorizedAccess errors, normal way to solve this is to alter execution policy:

Note that Unrestricted level is the least secure of all, and you're usually can go with RemoteSigned in order to disable unsigned scripts downloaded from the web until you manually remove Internet or Intranet Zone.Identifier from them, usually with Unlock button in file properties.

However, you may run to an occasion when you're not able to change execution policy. Usually that's because of corporate security settings in Active Directory. In PowerShell, that corresponds to scopes MachinePolicy and UserPolicy. A primary symptom of this situation is the following message:

You can't set execution policies at this scopes with PowerShell or gpedit.msc. Attempts to change this settings directly in registry is also ineffective: they're applied on restart or login, but at the same time they're being re-imported from Active Directory. However, while you won't be able to run arbitrary PowerShell scripts all around, for profiles and other local scripts that's only modified manually there's still a solution:

Now your profile script won't cause any errors. However, note that signing a certificate adds a signature block in the end of your script containing its hash. If you're about to modify the script, remove that block and, after you're done with editing the script, sign it again by repeating step 3.

Specify the shell that will run by default. Here are some examples of different shells:

This plugin provides Intellisense-type support of PS1 scripts, as well as an integrated PowerShell terminal. In order to open the terminal, go to Tools > PowerShell Console...

There appears to be no need to muck about with any kinds of settings or permissions in order to get it to work. It Just Works.

You only need to write powershell in the Shell path input, just like in the image, also you can see jetBrains documentation and configure any shell you want. powershell configuration

For WebStorm and PowerShell 6+ on Windows 10. Just follow this screenshot and change the default cmd.exe to pwsh.exe from settings. Finally restart the ide. Done! 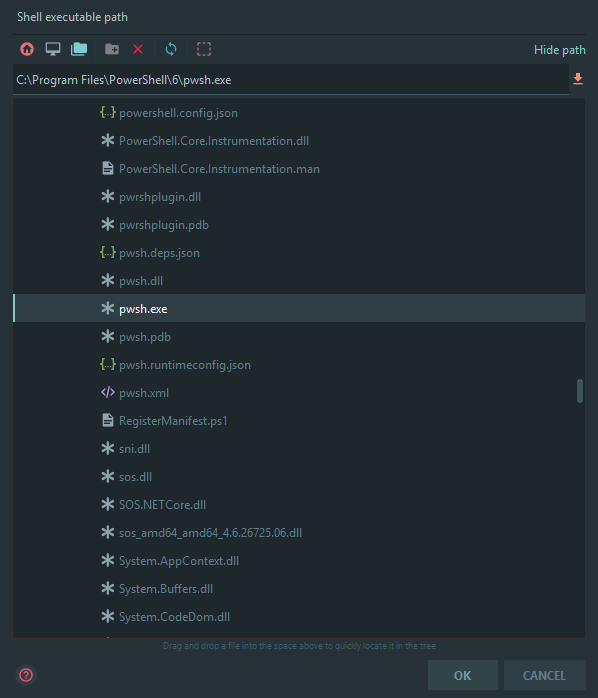 Not the answer you're looking for? Browse other questions tagged powershell intellij-idea pycharm or ask your own question.

0
IntelliJ Cannot Open Local Terminal - Failed to start powershell
69
PowerShell on Windows 7: Set-ExecutionPolicy for regular users
2
White space on the end of output string not printing with the string, but rather with the next printed line after it
0
Starting a file from within the IDE