I am fairly new to CSS3 and I want to be able to do the following:

When I add a class into a an element, it overrides the properties of another class used in this specific element.

Let's say that I have

I want to be able to add a class called bakground-none, that will over override the default background in the class left.

There are different ways in which properties can be overridden. Assuming you have

e.g. any of the following would override it:

The first two “win” by selector specificity; the third one wins by !important, a blunt instrument.

You could also organize your style sheets so that e.g. the rule

wins simply by order, i.e. by being after an otherwise equally “powerful” rule. But this imposes restrictions and requires you to be careful in any reorganization of style sheets.

These are all examples of the CSS Cascade, a crucial but widely misunderstood concept. It defines the exact rules for resolving conflicts between style sheet rules.

P.S. I used left and background-none as they were used in the question. They are examples of class names that should not be used, since they reflect specific rendering and not structural or semantic roles.

Just use !important it will help to override

Although it is said to be a bad practice, !important can be useful for utility classes, you just need to use it responsibly, check this: When Using important is the right choice

You should override by increasing Specificity of your styling. There are different ways of increasing the Specificity. Usage of !important which effects specificity, is a bad practice because it breaks natural cascading in your style sheet.

Following diagram taken from css-tricks.com will help you produce right specificity for your element based on a points structure. Whichever specificity has higher points, will win. Sounds like a game - doesn't it? 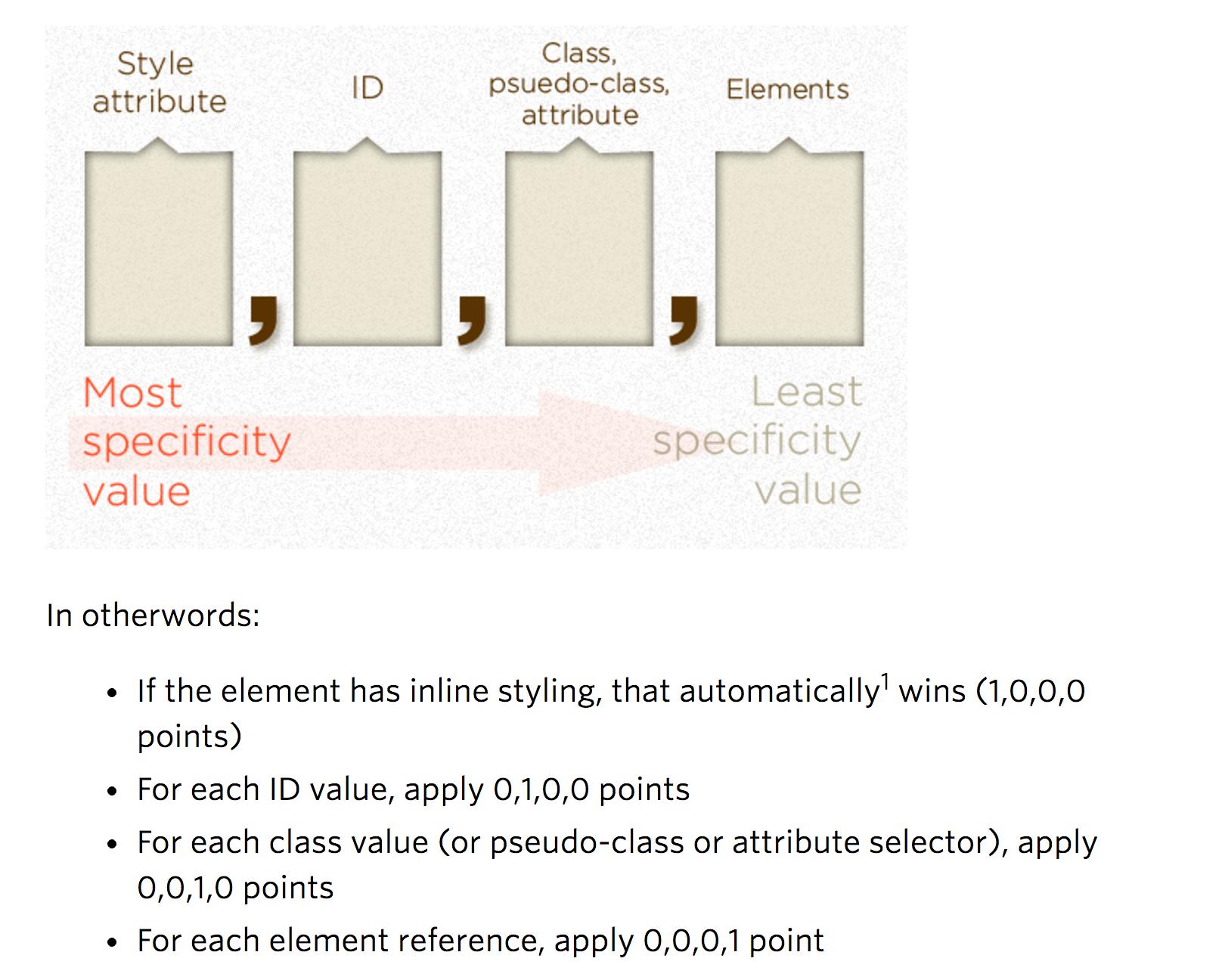 Checkout sample calculations here on css-tricks.com. This will help you understand the concept very well and it will only take 2 minutes.

If you then like to produce and/or compare different specificities by yourself, try this Specificity Calculator: https://specificity.keegan.st/ or you can just use traditional paper/pencil.

All the best for not using !important.

As an alternative to the important keyword, you could make the selector more specific, for example:

(Note: no space between the class names).

In this case, the rule will apply when both .left and .background-none are listed in the class attribute (regardless of the order or proximity).

If you list the bakground-none class after the other classes, its properties will override those already set. There is no need to use !important here.

The link will not have a red background. Please note that this only overrides properties that have a selector that is less or equally specific.

LIFO is the way browser parses CSS properties..If you are using Sass declare a variable called as

use it instead of directly assigning values like red or blue. When you want to override just reassign the value to

it should smoothly override. Using "!important" is not always the right choice..Its just a hotfix

Not the answer you're looking for? Browse other questions tagged css class overriding or ask your own question.

4
Why do I have to use ! important in this case?
2
How to change Bokeh favicon to another image
0
how to change size of text in css?
-2
Can we use our background in bootstrap?
1
How can I override classes with JSS
0
How to import Ant Design components without default class names?
0
Thymeleaf Input Form Binding
0
Overwrite parent CSS table class
0
How to make a bitcoin widget full width?
-1
Why do my CSS don't apply on my html code?
See more linked questions

1469
How to vertically center a “div” element for all browsers using CSS?
1265
Which characters are valid in CSS class names/selectors?
2373
How do I give text or an image a transparent background using CSS?
2322
How to make a div 100% height of the browser window
2090
How to change the cursor into a hand when a user hovers over a list item?
1621
Transitions on the CSS display property
2340
How can I transition height: 0; to height: auto; using CSS?
2897
How do I disable the resizable property of a textarea?
1913
How do CSS triangles work?