Reading email (from gmail) in emacs 24

What's the current authoritative way to check and send email in emacs 24?

I've checked the following SO links:

And understand the packages smtpmail, rmail, are involved, as well as an .authinfo file.

I have created an .authinfo file of the form:

And have added the following to my init.el file:

(As the second link, the Superuser one, said.)

But when I run M-x rmail, it still connects to my computer's local email address, rather than my gmail. What do I need to set up to login and read/write email? (If you could include keystrokes, that would also be super helpful.)

I'm running ubuntu 12.04 if that makes any difference.

After trying many ways, I now use offlineimap to sync messages between my machine and the google server. Gnus then reads messages from the local machine. Postfix is used to send messages to the gmail smtp server. Virtues of this setup: reading/sending email does not involve waiting for servers while in gnus (fast), can read/send email while offline (passed to server when online again). If you preferred to use RMail, you could instead of gnus.

Trickiest thing is setting up Postfix, that is clearly described here:

The program offlineimap is controlled by the file ~/.offlineimaprc. When offineimap runs, it will keep information in the directory ~/.offlineimap. You can read the docs for explanation of how that all works.

Re: sending mail: In fact, I used to do send mail directly from emacs. This involved fiddling with a number of things. It turned out to be much easier to just let postfix handle it. For example, I use several different email accounts to send mail from in Gnus; I now let gnus know about this via posting-styles, and let postfix worry about which address should go to which server, and how.

edit: I also tried notmuchmail and fetched emails with mbsync (isync Debian package). mbsync got certificates support out of the box when offlineimap needed a configuration step. Some say it is more reliable. I prefer notmuch's display of conversations.

So mu4e uses offlineimap to fetch the mail, mu to index it and mu4e to show it in emacs.

One can even write rich text mails using org-mode ! It's still experimental but here's an example on how to include math formula and a plot written in python. 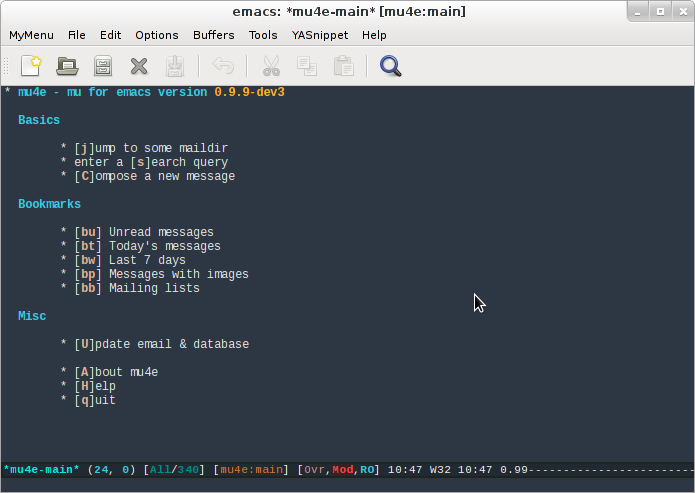 I'm not sure there's a "current authoritative way"?

Make sure you look at http://www.emacswiki.org/emacs/CategoryMail

mu4e sounded quite nice to me, but as I never got around to actually configuring this sort of thing for myself, I can't make any recommendations.

http://box.matto.nl/emacsgmail.html (for the Wanderlust client) is certainly relevant.

Like @Ehvince, I also recommend mu4e, even though I now use Gnus only. Mu4e is very easy to setup/use, convenient, fast and the search/sort capabilities are good.

While Wanderlust works, I found it a bit cumbersome in terms of installation. Once it was setup, I created a cheat sheet for keybindings that I kept nearby for a while. I'm not sure that it is actively maintained.

I've heard about Mew but never used it. One bonus point is that it seems to be installable directly as a package.

I came back to Gnus because it's bundled with Emacs, no additional software needed. My current setup includes: Mairix(for search), OfflineImap(to fetch mail). Like @Jeffrey, I also read news in Gnus.

As others have said, there is no one "authoritative" way to do this. Over the years, I've used VM, Gnus, MH-E and Wanderlust, not to mention a slew of non-emacs mail clients.

I'd love to try mu4e, based on all the great things I hear about it, but using offlineimap seems to defeat the purpose of IMAP, at least for using multiple computers. I don't really want to have to sync local copies of email on my work laptop, my home laptop and my desktop. (Actually, I do have a local repository on my desktop in MH format, so I could convert that to Maildir, but most of my mail reading is done from the laptops anyway.)

I'm currently using Gnus talking directly to an IMAP server. It sometimes pauses when fetching messages, but in general, it's pretty responsive. I found Wanderlust very hard to set up, and very slow once it worked.

Not the answer you're looking for? Browse other questions tagged email emacs smtp emacs24 or ask your own question.

2
Synchronise and read Gmail offline, using isync OR offlineimap
5
Setup for Gmail in Emacs VM
4
Setting up Emacs Rmail with Gmail
10
Which Emacs mail package should I use?

879
Sending email in .NET through Gmail
4429
How to validate an email address in JavaScript
3340
How to validate an email address using a regular expression?
995
What is the maximum length of a valid email address?
390
Send email using the GMail SMTP server from a PHP page
691
Differences between Emacs and Vim
1
Do Yahoo & Gmail smtp server uses implicit or explicit SSL?
12
Jenkins email configuration
3
smtp.gmail.com vs ssl://smtp.gmail.com while sending email using gmail smtp server
2
Opencart 3.0.2.0, Email sending failed while Using Gmail