Say that I have a project which looks like the following:

There are two UIViews - one called yellowBox and the other called redBox. The auto layout constraints dictate that the yellowBox is 60 points from the top of the superview with 350 points leading and trailing spaces (i.e. to left and right of the view). The redBox has the same leading and trailing space constraints. There is a vertical space constraint between the two boxes of 0 to indicate that the bottom of the yellowBox should always be directly on top of the redBox.

When the user taps the Expand Yellow Box button, I would like the height of the yellowBox to increase and, as a result, the redBox moves down to continue satisfying the vertical space constraint (that the yellowBox is always on top of the redBox). Here is the animation code:

However, I have been unable to get this working properly. As you can see by the red icon, there is a problem with the constraints at the moment: 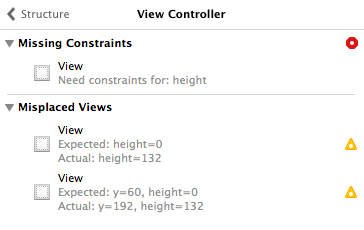 which is fair enough, as there's no way for auto layout to know the height of the boxes. However, I don't know how to resolve this issue in such a way that it will allow for the boxes to be resized and moved. For example, if I specify a height constraint on the yellowBox then that will prevent it from being resized. If I set the height constraint to be greater than or equal (to allow the yellowBox height to increase) then I get a different constraint error:

All constraints have been established using Xcode in the storyboard - none have been written in code.

Try it as mentioned by shwet-solanki, but add the following line after changing the constraint:

Where yellowBoxHeightConstraint is the IBOutlet for height constraint of yellowBox. Hope this helps.

Hope this works for you.

Not the answer you're looking for? Browse other questions tagged ios cocoa-touch uiview autolayout or ask your own question.

571
Giving UIView rounded corners
951
How do I animate constraint changes?
181
iOS: Multi-line UILabel in Auto Layout
276
Evenly space multiple views within a container view
122
iOS: How does one animate to new autolayout constraint (height)
329
How to use auto-layout to move other views when a view is hidden?
1492
Using Auto Layout in UITableView for dynamic cell layouts & variable row heights
499
UIScrollView Scrollable Content Size Ambiguity
202
UICollectionView Self Sizing Cells with Auto Layout
3
In auto layout, How do I “hide” a UIView?