I'm planning to use AngularJS in my big applications. So I'm in the process to find out the right modules to use.

Which module should I use for better manageability and extensibility?

ui-router is a 3rd-party module and is very powerful. It supports everything the normal ngRoute can do as well as many extra functions.

Here are some common reason ui-router is chosen over ngRoute:

In essence, ui-router is ngRouter with more features, under the sheets it is quite different. These additional features are very useful for larger applications.

ui-router is a framework which was made outside the AngularJS project to improve and enhance routing capabilities.

From the ui-router documentation:

AngularUI Router is a routing framework for AngularJS, which allows you to organize the parts of your interface into a state machine. Unlike the $route service in Angular core, which is organized around URL routes, UI-Router is organized around states, which may optionally have routes, as well as other behavior, attached.

States are bound to named, nested and parallel views, allowing you to powerfully manage your application's interface.

Neither of them is better, you will have to chose the most appropriate for your project.

However, if you plan to have complex views in your application and you would like to deal with the "$state" notion. I recommend you to chose ui-router.

ngRoute is a angular core module which is good for basic scenarios. I believe that they will add more powerful features in upcoming releases.

Ui-router is a contributed module which is overcome the problems of ngRoute. Mainly Nested/Complex views.

Some of the difference between ui-router and ngRoute 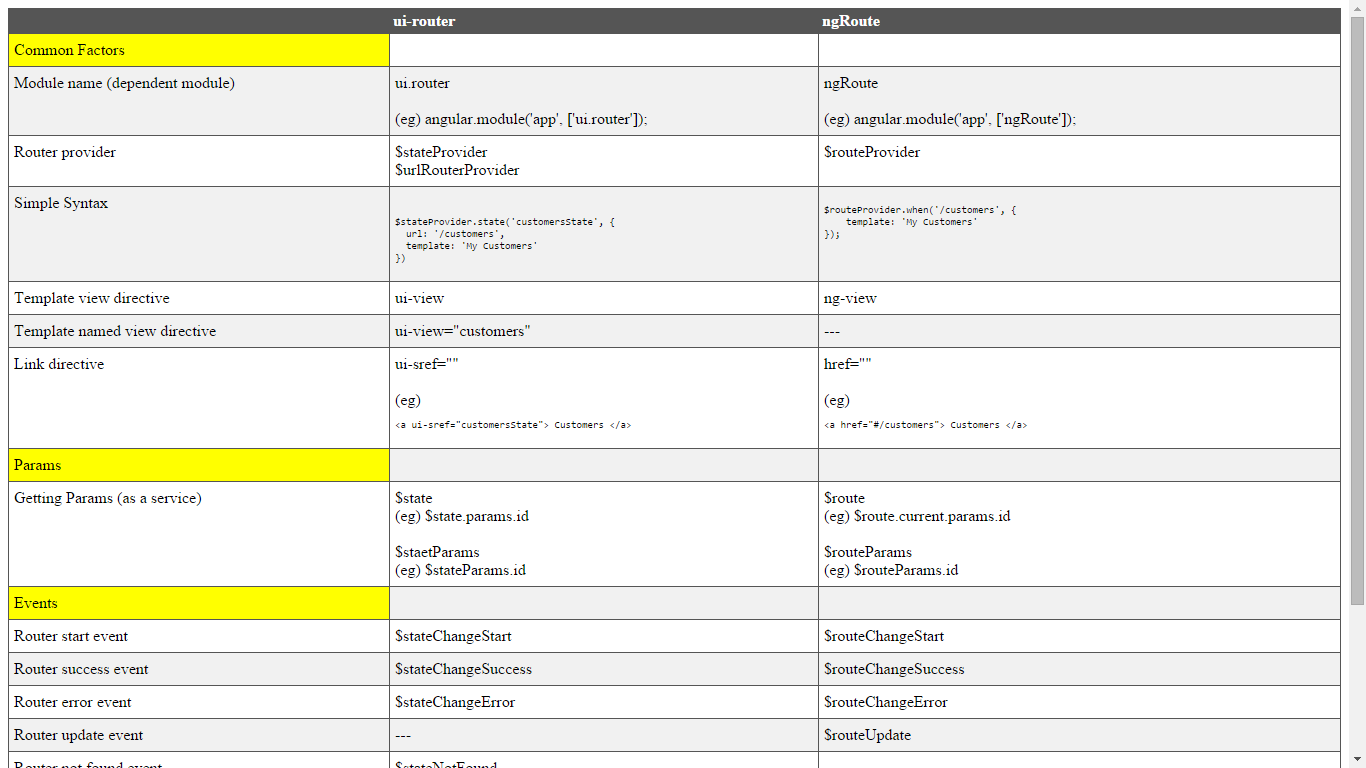 ngRoute is part of the core AngularJS framework.

ui-router is a community library that has been created to attempt to improve upon the default routing capabilities.

Here is a good article about configuring/setting up ui-router:

If you want to make use of nested views functionality implemented within ngRoute paradigm, try angular-route-segment - it aims to extend ngRoute rather than to replace it.

Generally ui-router works on a state mechanism... It can be understood with an easy example:

Let's say we have a big application of a music library (like ..gaana or saavan or any other). And at the bottom of the page, you have a music player which is shared across all the state of the page.

Now let's say you just click on some songs to play. In this case, only that music player state should change instead of reloading the full page. That can be easily handled by ui-router.

While in ngRoute we just attach the view and the controller.

ng-route is developed by the angularJS Team for routing.

ngRoute is a module built by the Angular team that provides basic client-side routing functionality. This module provides a fairly powerful base for routing, and can be built upon pretty easily to give solid routing functionality, as exemplified in this blog post (be sure to read the comment trail between Ward Bell and Ben Nadel, the author - they are a couple of Angular pros)

ui-router shifts the focus from url-centric routes to application "states", which may or may not be reflected in the url.

The primary features added by ui-router are nested states and named views.

Named views are another additional feature of ui-router. With ngRoute, you can only have a single ngView directive on a page, whereas with named views in ui-router you can specify multiple ui-view directives, and then each state is able to affect the template and controller of the names views. A super simple example of this would be to have the main content of your app be the primary view, and then to also have a footer bar that would be a separate ui-view. In this scenario, the footer's controller no longer has to listen for state/route changes.

A good comparison of ngRoute and ui-router can be found on this podcast episode.

Just to make things more confusing, keep an eye on the new "official" routing module that the Angular team is expecting to release for versions 1.5 and 2.0 of Angular. This will be replacing the ngRoute module. Here is the current documentation for the new Router module - it is fairly sparse as of this posting since the implementation has not yet been finalized. Watch here for more news on when this module will actually be released.

ngRoute is a basic routing library, where you can specify just one view and controller for any route.

With ui-router, you can specify multiple views, both parallel and nested. So if your application requires (or may require in future) any kind of complex routing/views, then go ahead with ui-router.

This is best getting started guide for AngularUI Router.

Rest us all features.

ui router make your life easier! You can add it to you AngularJS application via injecting it into your applications...

ng-route comes as part of the core AngularJS, so it's simpler and gives you fewer options...

Also when using it, don't forget to use: ngView ..

https://github.com/angular-ui/ui-router but gives you more options....

AngularUI Router is a routing framework for AngularJS, which allows you to organize the parts of your interface into a state machine. Unlike the $route service in the Angular ngRoute module, which is organized around URL routes, UI-Router is organized around states, which may optionally have routes, as well as other behavior, attached.

ngRoute is a module developed by the Angular.js team which was earlier part of the Angular core.

ui-router is a framework which was made outside the Angular.js project to improve and enhance routing capabalities.

ng-View (developed by the AngularJS team) can be used only once per page, whereas ui-View (3rd party module) can be used multiple times per page.

ui-View is therefore the best option.

Not the answer you're looking for? Browse other questions tagged javascript angularjs angularjs-routing angular-ui-router angularjs-module or ask your own question.

-5
what is the different between ['ngRoute', 'ui.router']?
237
AngularJS : How do I switch views from a controller function?
138
AngularJS UI Router - change url without reloading state
14
AngularJS - Best way to update $route parameter
16
state provider and route provider in angularJS
9
Preload ng-view for smoother navigation
6
How to pass param in routeProvider in Angular JS?
0
Which is better ng-view or ui-view?
5
ui router vs ngroute for sinlge page app
8
AngularJS : Load js file through UI router
See more linked questions