How to run a specific version of Java with a program?

So I have the latest version of JRE 7 on my computer, and everything is working fine. Lately, I've downloaded a program that requires JRE 6. I know where all of the files are located on my computer, all I'm asking is the .bat file code to run a specific version of Java with only that program. I am somewhat of a newbie when it comes to Windows and Java PATH structure, so

Stanford's computer science course has you use a modified version of Eclipse to code in Java, and it was created when Java was still in version 6. If you are familiar with this, then you may know of karel the robot, a Java application that opens in Eclipse. When I tried to run this, the Karel program did not appear; only a blank screen. I found a youtube video about using Karel and many of the people in the comments had been having this problem, and some said that using JRE 6 fixed it. Also on the installation instructions, it said to use JRE 1.6, but I thought it would work with JRE 7

you can call each java.exe directly.

to call a program with jre6

and to call a program with jre7 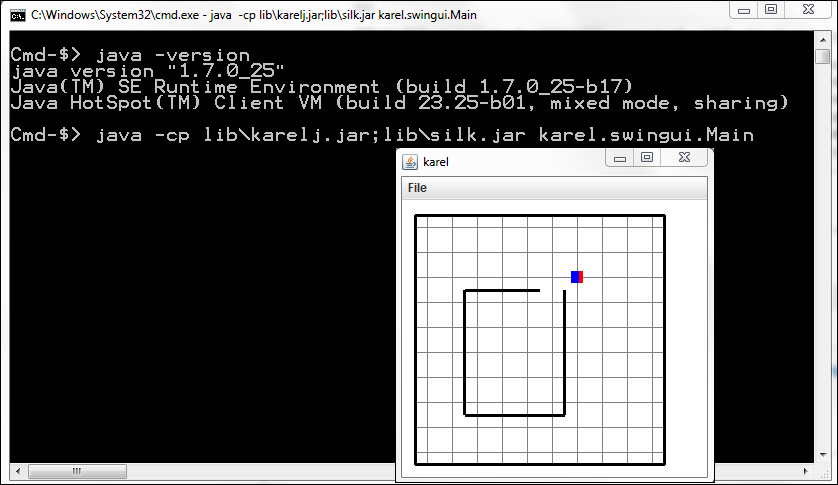 However if you really need java 6 for operating it then you could write some .bat file like this:

Not the answer you're looking for? Browse other questions tagged java batch-file or ask your own question.

1
Can we use different java version library in application

3521
How do I efficiently iterate over each entry in a Java Map?
2398
How do I call one constructor from another in Java?
4295
How do I read / convert an InputStream into a String in Java?
3701
How do I generate random integers within a specific range in Java?
2405
How do I determine whether an array contains a particular value in Java?
3195
How do I convert a String to an int in Java?
3401
How can I create a memory leak in Java?
1101
Can't execute jar- file: “no main manifest attribute”
988
Can't start Eclipse - Java was started but returned exit code=13
758
Dealing with “Xerces hell” in Java/Maven?