This question does not appear to be about a specific programming problem, a software algorithm, or software tools primarily used by programmers. If you believe the question would be on-topic on another Stack Exchange site, you can leave a comment to explain where the question may be able to be answered.

Issue: I have a Windows 7 sub-directory which I can't delete.

While I know others here, and many more elsewhere on the Internet have asked about this general class of Windows 7 file system problem, my question here specifically relates to the specific class of un-deletable files on Windows 7 which have a trailing space in the directory name.

Is there a better tool to inspect and/or edit my filesystem (in hex if need be)?

What has been tried: I have read many web pages on this subject and tried many potential solutions. I have been studding the problem most recently using PowerShell which seems to be fully capable of dealing with system internals. At this point I am looking for something like a hex editor for the filesystem.

What it's not caused by:

What it's not fixed by:

What caused it? In my case the un-deletable sub-directory was created some months ago with a custom PHP program that I use for source tree backups. It appears to have either a space or other bad character in the name, but I can't be sure. It is visible in a file directory, but unavailable to delete, rename, rmdir, etc.

Investigation: I can move it around on my file system and have placed it inside a sub-directory called, 'holds bad subdir' on C:.

Here you can see it with PowerShell. First I show it with a Get-ChildItem (which is the same as the alias 'dir'):

If I try to delete it in a cmd window by typing 'del "2' + tab, it completes the file name expansion as follows: del "20120530-04 ", showing that there is a space at the end of the directory name. When I execute this command the result is:

If I try to delete it with del 2*, the system returns as if though it had deleted it, but does not.

If I issue this same command in PowerShell, and also with the Force option, it reports, "An object at the specified path C:\holds bad subdir\20120530-04 does not exist.", as follows:

This is sort of strange because the directory can clearly see it, but any methods apparently either can't see it or can't be applied to it.

I can also view the un-deletable sub-directory in Windows Explorer. When I browse into it, it says, "this folder is empty". And if I try to delete it there I get: 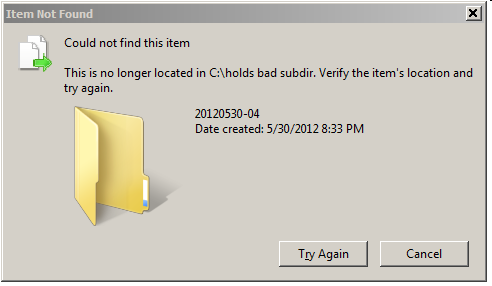 Also interestingly, the Security tab reports "(X) The requested security information is either unavailable or can't be displayed."

And it's not Read-only, nor Hidden.

Scope of issue: Now, this is not a big problem, it is easy to bury this sub-directory inside an out-of-the-way sub-directory and just not worry about it.

But for me this has turned into an intellectual challenge and partly a way to learn more about the guts of Windows 7. I guess I am amazed that such a bug in Windows could exist at such a low level, and with so many systems installed in the world. It's hard at this point to know if this is a Windows bug, bad data (that a bug let in), or just bad data.

According to You cannot delete a file or a folder on an NTFS file system volume (requires JavaScript to display), the following should work (notice it uses a UNC path).

Be sure to do this with cmd.exe. It does not seem to work with PowerShell's Remove-Item (rd).

I've got a few suggestions.

Method 1: The default Path parameter in cmdlets are known to have problems with special characters. LiteralPath however should support all characters and often solves problems like the one you have.

Method 2: You can try to use the shortname (8.3 filename) for the folder. This is a cmd.exe approach. You could also wrap the two commands inside cmd /c " YOUR COMMAND " to run them in PowerShell.

Method 3: You could also see if a WMI approach works:

If this returns nothing, try adding a space at the end in the filename. If it returns an object, run:

If it doens't return an object both with and without the space at the end, try the following apporach using wildcard (this can take everything from 1-15 minutes to run).

And delete it if it returns the correct folder:

You say you've tried del which deleted files, but you haven't mentioned rd or its synonym rmdir wich removes directories.

Boot up a Live Linux Ubuntu CDROM and see how that file manager goes.

From the parent directory, do the following, hoping to trick any helpful translation CMD is doing:

Not the answer you're looking for? Browse other questions tagged powershell windows-7 cmd explorer delete-directory or ask your own question.

-1
How can I delete a folder using CMD utitilty in Windows XP?

603
How do I get current date/time on the Windows command line in a suitable format for usage in a file/folder name?
402
How to recursively delete an entire directory with PowerShell 2.0?
307
Loop through files in a directory using PowerShell
0
Delete user folder even with all contents, Powershell
1
How correct delete folder in IIS server
322
How to Delete node_modules - Deep Nested Folder in Windows
9
Remove-Item errors when run at end of TFS build
3
How to get Get-ChildItem to handle path with non-breaking space
0
Folder Permission details for folders\sub folders
1
How do I delete a Windows file with a trailing space, (or period), character?