Thanks for taking the time to read this. It means a lot to me.

For a cake I would go with kopischke's answer, but for a card where there is more place I would choose to do this:

Here's how that looks like in an editor for a nicer syntax highlighting: 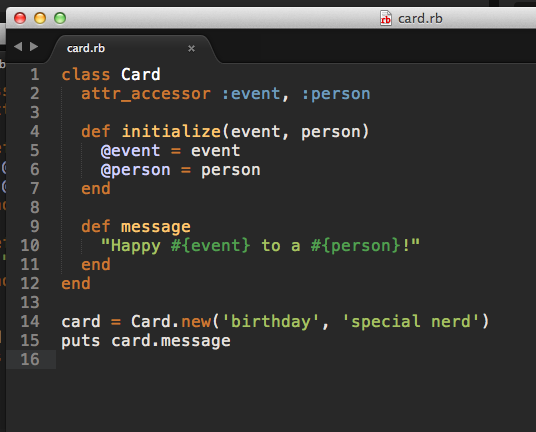 I like mechanlicalfish's answer for a card but for a cake I would suggest:

Just so you know, @my_special_nerd = "Kyle" assigns a variable called special nerd with the String Kyle. Kinda of like x = that you learned in Algebra but you can put sentences on the right side.

"Happy Birthday ..." is a string. Strings are how we store sentences that programmers can read.

If there program was run using Ruby, it would print to the programmer's screen:

The Ruby command to output some text is puts, i.e. puts "happy 20th birthday, Kyle". If you want a slightly more nerdy and less bland variant, use the ap command, which stands for awesome print:

Write the part in double quotes in a different color (also note the nested single and double quotes), as that is what ap is for: structured, colorized output. Have fun :).

I would write something like this on the cake, more UNIX-y and more geeky if you ask me. Also modules are more ruby-specific than classes, so:

Then for the card I don't know really know. Maybe something encoded in base64 or XOR (depending what level of Geek we're talking about) might be more intriguing. Or simple md5sum-ed message in order for him to have to perform a sort of brute-force to find out.

and for the card:

These will respectively display

If you want "happy" capitalized. replace 'i' at the beginning with 'I'

Unfortunately, this only works for Bubba's. song.play would cause the following to be displayed:

0x14 is the hexadecimal representation of the number decimal 20.

Not the answer you're looking for? Browse other questions tagged ruby or ask your own question.