Where is the global git config data stored?

When using git config --global to set things up, to which file will it write?

I can't find it at these places:

I have not set an ENV?

You will see which config is set where.
See "Where do the settings in my Git configuration come from?"

As Stevoisiak points out in the comments,

it will work with non-standard install locations. (i.e. Git Portable)

(like the latest PortableGit-2.14.2-64-bit.7z.exe, which can be uncompressed anywhere you want)

For writing options: write to global ~/.gitconfig file rather than the repository .git/config.

Since you're using Git for Windows, it may not be clear what location this corresponds to. But if you look at etc/profile (in C:\Program Files\Git), you'll see:

That means the file is in C:\Users\MyLogin\.gitconfig for Git in Windows 7.

I was also looking for the global .gitconfig on my Windows machine and found this neat trick using git.

Do a: git config --global -e and then, if you are lucky, you will get a text editor loaded with your global .gitconfig file. Simply lookup the folder from there (or try a save as...), et voilà! :-)

On *nixes, it's in ~/.gitconfig. Is there a corresponding file in your home?

On Windows you can type in git bash

The paths for msysgit are:

In my case I have defined a personal HOME environment variable and pointed it to D:\git\GitHOME and copied all those GIT files (which are without and extension) to the GitHOME directory for safe keeping.

The windows environment variables can be set via the Advanced tab in the My Computer properties dialog.

When is the global .gitconfig file created?

First off, git doesn't automatically create the global config file (.gitconfig) during its installation. The file is not created until it is written to for the first time. If you have never set a system variable, it will not be on your file system. I'm guessing that might be the source of the problem.

One way to ask Git to create it is to request an edit. Doing so will force the file's creation.

If you monitor the user's home folder when you issue this command, you will see the .gitconfig file magically appear.

Where is git configuration stored?

Here's a quick rundown of the the name and location of the configuration files associated with the three Git scopes, namely system, global and local:

Of course, seeing is believing, so here's an image showing each file and each location. I pulled the image from an article I wrote on the topic. 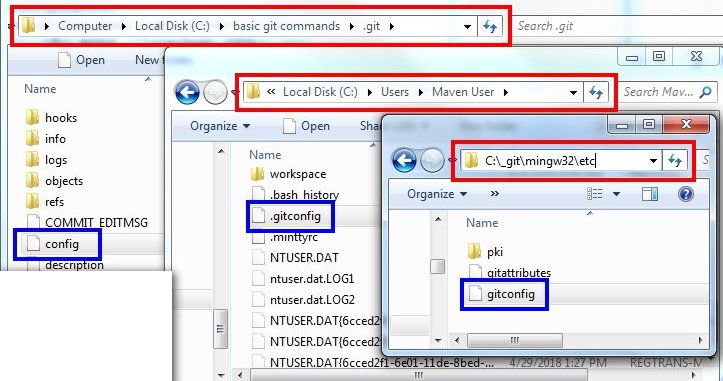 If you are using TortoiseGit on a windows PC you can use:

to open the global .gitignore file.

But if you use your Windows (7) PC in a domain your profile dir is may be a network share (mounted as a drive). In this case TortoiseGit (at least:1.6.5.0) is pointing you to the wrong dir (on c:...). See the closed TortoiseGit issue 922 for more information. Or using %HOMEDRIVE%%HOMEPATH% to open the dir that contains the .gitignore file.

As @MatrixFrog pointed out in their comment, if the goal is to edit the config, you might want to run:

This command will open the config file (in this case, the --global one) in the editor of choice, and await for the file to be closed (just like during git rebase -i).

I am using SmartGit with msysgit on Windows 8.1 and noticed that there can be three different locations for the gitconfig file:

But the one that is used is the one from %USERPROFILE%\.gitconfig.

It might be useful to note (for *nix platforms): some types of global git configuration/information are stored in /usr/share/git-core/, such as git autocompletion scripts and the following (default) hooks:

Each of these can contain their own set of commands to execute, at the time described by their respective filenames.

I am running Windows 7 and using git as setup by following the instructions on GitHub (a year or two back). A rather common use-case I would have thought. None of the answers above helped me, and after much frustration I eventually found my 'real' gitconfig file in the following directory;

Obviously substitute your user name and presumably the suffix after PortableGit_ is a unique GUID or similar.

I had also a problem with my global .gitconfig This is for the case someone also has this strange

Now I fixed it. The problem was a second .gitconfig in this folder:

I don't know where it came from... But now everything works like a charme again.

Just completely agree with @cameron-mckenzie's answer here on this page, above about When is the global .gitconfig file created? (this clearly applies in case of every OS). Rest of his answer deals with Win7 systems.

In Win10 systems too, the .gitconfig global file would create for the very first time only when you tend to set user.name & user.email system variables via windows command-prompt.
As soon as it's set, the .gitconfig file would get created in %USERPROFILE% dir.

Below command works for Win & MacOS, both

So, let's suppose if .gitconfig file already exists. You can know its location via Command-prompt/Gitbash/Terminal by :

I think it is important to post this quote:

Uninstall Msysgit and install Cygwin + Git. Then global '.gitconfig' will be here: C:\cygwin(64)\home\[userName]\.gitconfig .

Also you don't have to worry about Mysysgit overwriting your 'profile' configuration settings if you specify a specific path to global '.gitconfig', using this method.

In general, save yourself and use cygwin bash shell in windows and be happier

I had a similar issue; the problem was that the .gitconfig file was located in

Files section have a detailed description.

I had installed my Git in: C:\Users\_myuserfolder_\AppData\Local\Programs\Git

Not the answer you're looking for? Browse other questions tagged git config or ask your own question.

8
When you set a global configuration option for git on Windows, where does it get written to?
274
How can I configure KDiff3 as a merge tool and diff tool for git?
96
Where do the settings in my Git configuration come from?
87
Change Git user in IntelliJ IDEA
77
Where should I place my global 'gitattributes' file?
45
What is the meaning of these Windows Environment variables: HOMEDRIVE, HOMEPATH, HOMESHARE, USERPROFILE
30
Windows-specific Git configuration settings; where are they set?
9
Window Git $ git config --global http.proxy warning: http.proxy has multiple values
8
Is it possible to diff PowerPoint version-controlled with git?
7
Git - fatal: unknown error occured while reading the configuration files
See more linked questions

7682
How to remove local (untracked) files from the current Git working tree
3557
View the change history of a file using Git versioning
13241
What is the difference between 'git pull' and 'git fetch'?
854
Git for beginners: The definitive practical guide
24456
How do I undo the most recent local commits in Git?
3535
Remove a file from a Git repository without deleting it from the local filesystem
5993
Move the most recent commit(s) to a new branch with Git
5397
How to change the URI (URL) for a remote Git repository?
4959
How to determine the URL that a local Git repository was originally cloned from?
3491
How to get the current branch name in Git?