How can I add a table of contents to a Jupyter / JupyterLab notebook?

The documentation at http://ipython.org/ipython-doc/stable/interactive/notebook.html says

You can provide a conceptual structure for your computational document as a whole using different levels of headings; there are 6 levels available, from level 1 (top level) down to level 6 (paragraph). These can be used later for constructing tables of contents, etc.

However, I can't find instructions anywhere on how to use my hierarchical headings to create such a table of contents. Is there a way to do this?

NB: I'd also be interested in other kinds of navigation using ipython notebook headings, if any exist. For instance, jumping back and forward from heading to heading in order to quickly find the start of each section, or hiding (folding) the contents of an entire section. This is my wish-list - but any kind of navigation at all would be of interest. Thanks!

There is an ipython nbextension that constructs a table of contents for a notebook. It seems to only provide navigation, not section folding.

You can add a TOC manually with Markdown and HTML. Here's how I have been adding:

It may not be the best approach, but it works. Hope this helps.

Here is one more option without too much JS hassle: https://github.com/kmahelona/ipython_notebook_goodies

How about using a Browser plugin that gives you an overview of ANY html page. I have tried the following:

They both work pretty well for IPython Notebooks. I was reluctant to use the previous solutions as they seem a bit unstable and ended up using these extensions.

There are now two packages that can be used to handle Jupyter extensions:

Starting from recent versions of jupyter_contrib_nbextensions, at least with conda you don't need to install jupyter_nbextensions_configurator because it gets installed together with those extensions.

I recently created a small extension to Jupyter named jupyter-navbar. It searches for headers written in markdown cells, and displays links to them in the sidebar in a hierarchical fashion. The sidebar is resizable and collapsible. See screenshot below.

It is easy to install, and takes advantage of the 'custom' JS and CSS codes that get executed whenever a notebook is opened, so you don't need to manually run it. 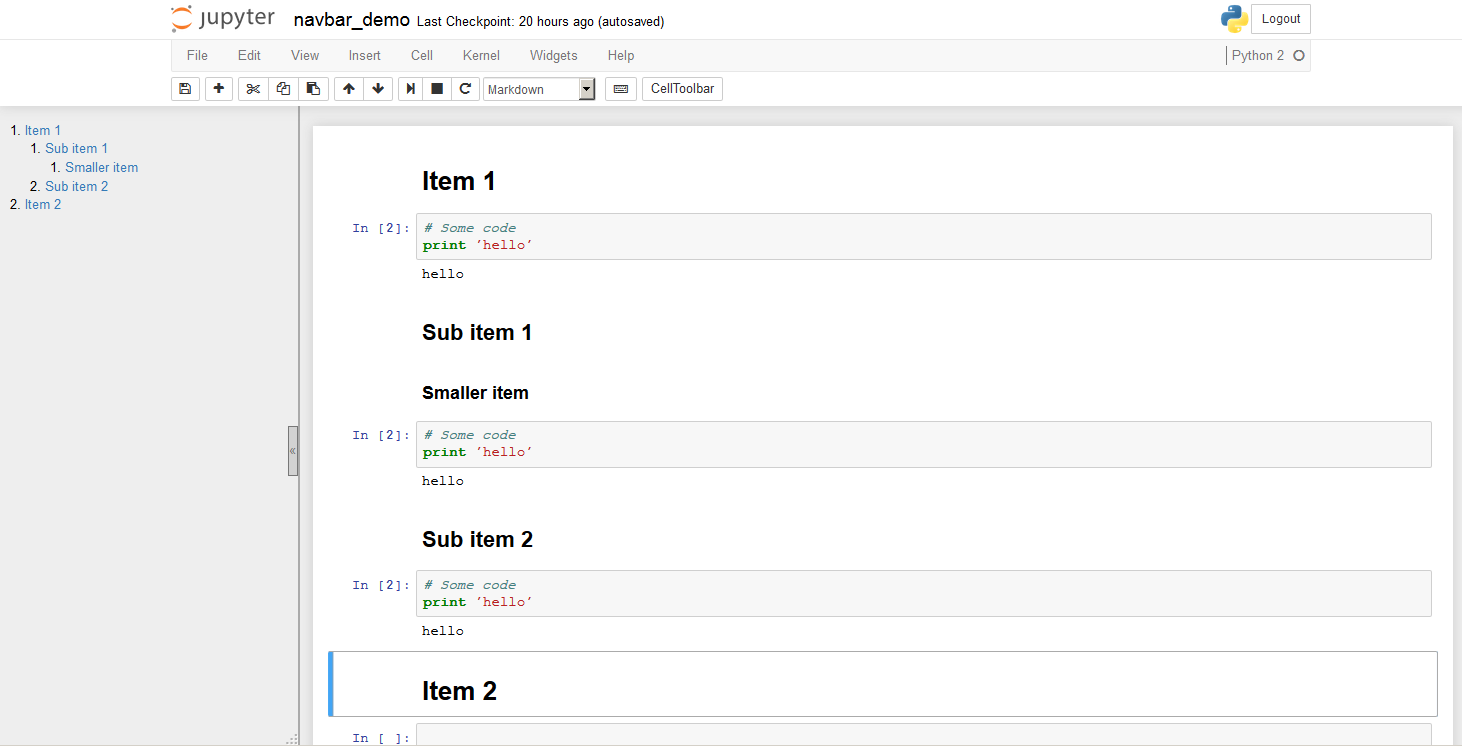 There are already many good answers to this question, but they often require tweaks to work properly with notebooks in JupyterLab. I wrote this answer to detail the possible ways of including a ToC in a notebook while working in and exporting from JupyterLab.

As a side panel

The jupyterlab-toc extension adds the ToC as a side panel that can number headings, collapse sections, and be used for navigation (see gif below for a demo). Install with the following command

In the notebook as a cell

At the time being, this can either be done manually as in Matt Dancho's answer, or automatically via the toc2 jupyter notebook extension in the classic notebook interface.

First, install toc2 as part of the jupyter_contrib_nbextensions bundle:

Then, launch JupyterLab, go to Help --> Launch Classic Notebook, and open the notebook in which you want to add the ToC. Click the toc2 symbol in the toolbar to bring up the floating ToC window (see the gif below if you can't find it), click the gear icon and check the box for "Add notebook ToC cell". Save the notebook and the ToC cell will be there when you open it in JupyterLab. The inserted cell is a markdown cell with html in it, it will not update automatically.

The default options of the toc2 can be configured in the "Nbextensions" tab in the classic notebook launch page. You can e.g. choose to number headings and to anchor the ToC as a side bar (which I personally think looks cleaner).

In an exported HTML file

Remember that shell commands can be added to notebook cells by prefacing them with an exclamation mark !, so you can stick this line in the last cell of the notebook and always have an HTML file with a ToC generated when you hit "Run all cells" (or whatever output you desire from nbconvert). This way, you could use jupyterlab-toc to navigate the notebook while you are working, and still get ToCs in the exported output without having to resort to using the classic notebook interface (for the purists among us).

Note that configuring the default toc2 options as described above, will not change the format of nbconver --to html_toc. You need to open the notebook in the classic notebook interface for the metadata to be written to the .ipynb file (nbconvert reads the metadata when exporting) Alternatively, you can add the metadata manually via the Notebook tools tab of the JupyterLab sidebar, e.g. something like:

If you prefer a GUI-driven approach, you should be able to open the classic notebook and click File --> Save as HTML (with ToC) (although note that this menu item was not available for me).

The gifs above are linked from the respective documentation of the extensions.

As @Ian and @Sergey have mentioned, nbextensions is a simple solution. To elaborate their answer, here is a few more information.

The nbextensions contains a collection of extensions that add functionality to your Jupyter notebook.

For example, just to cite a few extensions:

The installation can be done through Conda or PIP

To copy the nbextensions' javascript and css files into the jupyter server's search directory, do the following:

Note that if you are not familiar with the terminal, it would be better to install nbextensions configurator (see the next section)

You can enable/disable the extensions of your choice. As the documentation mentions, the generic command is:

Concretely, to enable the ToC (Table of Contents) extension, do:

As its documentation says, nbextensions_configurator provides config interfaces for nbextensions. 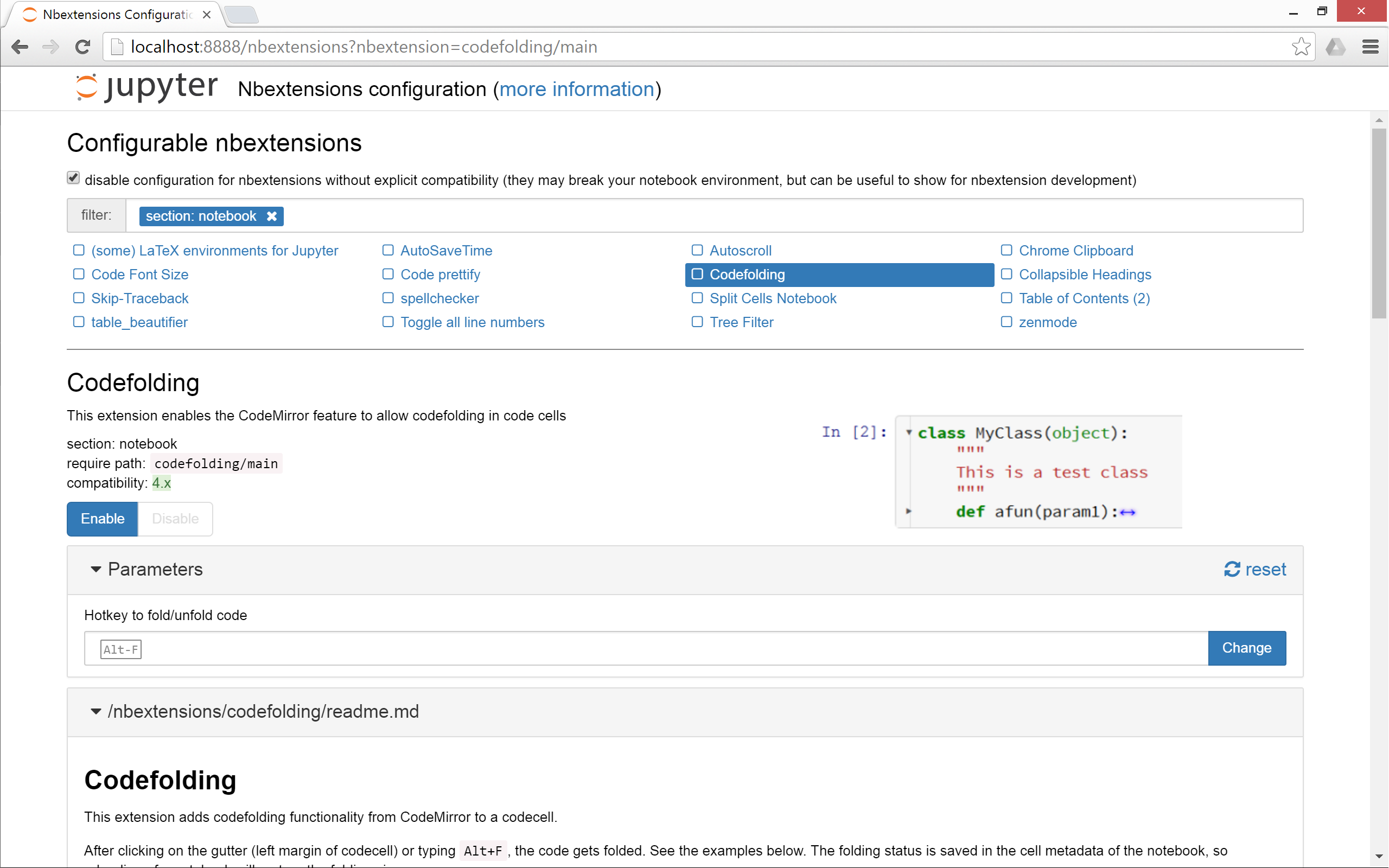 To install it if you use conda:

If you don't have Conda or don't want to install through Conda, then do the following 2 steps:

Here is my approach, clunky as it is and available in github:

Put in the very first notebook cell, the import cell:

Somewhere after the import cell, put in the genTOCEntry cell but don't run it yet:

Below the genTOCEntry cell`, make a TOC cell as a markdown cell:

As the notebook is developed, put this genTOCMarkdownCell before starting a new section:

Then when you go to the top of your notebook and run genTocEntry, you get the output:

Copy this link string and paste it into the TOC markdown cell as follows:

One thing I often forget is that clicking a line in the TOC makes the browser jump to that cell but doesn't select it. Whatever cell was active when we clicked on the TOC link is still active, so a down or up arrow or shift-enter refers to still active cell, not the cell we got by clicking on the TOC link.

There is a section in the notebook called 'What you need to do' - follow it and have a nice floating table of contents : )

Here is an html version which already shows it: http://htmlpreview.github.io/?https://github.com/ahambi/140824-TOC/blob/master/A%20floating%20table%20of%20contents.htm

Not the answer you're looking for? Browse other questions tagged jupyter-notebook jupyter jupyter-lab or ask your own question.

363
Markdown to create pages and table of contents?
526
Cross-reference (named anchor) in markdown
4
ipython notebook navigate between cells
10
Simultaneously edit the same ipython notebook in two tabs
1
Is there a document map extension for Jupyter notebook?