For which browsers are we using Paul Irish's requestAnimationFrame shim?

Paul Irish has a post called requestAnimationFrame for Smart Animating. Now Paul is a smart guy - and I'm just trying to understand the scope of the application of this idea.

He says to do HTML5 animation - you should use a requestAnimationFrame shim like this:

Which is understandable. We can apply this in a JSFiddle like this and the results are quite good.

But if I rip out the shim layer function, then in Chrome 31 and Firefox 24 it works fine.

So if I look at the compatibility for the RequestAnimationFrame function - it looks like browsers have had this function for a very long time.

My question is - For which browsers are we using Paul Irish's requestAnimationFrame shim? You can rip it out and it still works, and it looks like browsers have had it for a long time.

I'm afraid the polyfill/shim will be necessary if you want to support older browsers.

As you point out, it works with latest Firefox and Chrome without prefix. Firefox has also a new policy not to prefix any future technology so that's perhaps a good thing too and there is a proposal to do the same for Chrome.

But if you run older browsers (and a surprisingly large group of users do) the polyfill is necessary. 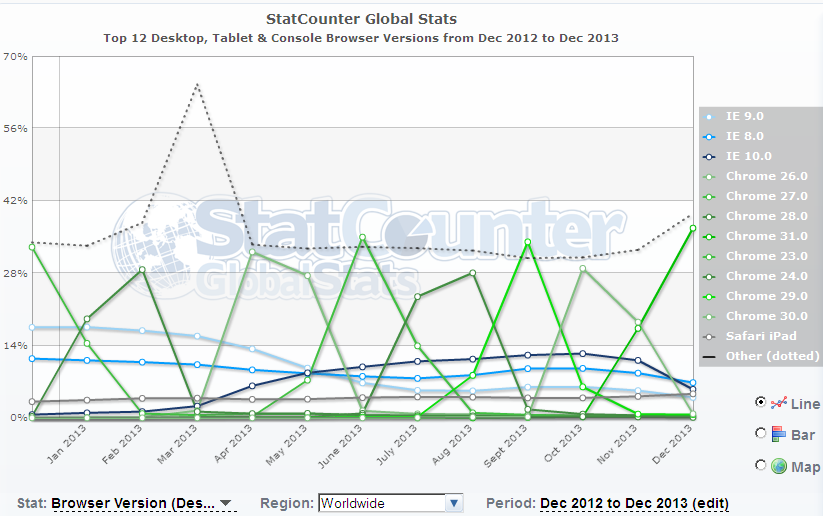 Here we see IE9 on top followed by IE8, 10 and then older Chrome versions (although this includes the whole last year which explains the Chrome part and also IE9 vs. IE10). Variations may apply to regions so test out the geographic area where you think your application is relevant.

You need the polyfill for IE8, IE9, Android Browser, and a bunch of older stuff you'd have to make a judgement call on.

Here's the current support for rAF thanks to caniuse.com:

Anything with a yellow flag in the corner uses a prefix so it needs the shim. Anything red needs the setTimeout fallback.

But, to get at your core point... soon, yes, soon, the polyfill will be much smaller. And hopefully not too long from now we can kill it and use rAF directly.

Not the answer you're looking for? Browse other questions tagged javascript html requestanimationframe or ask your own question.

1
How do I test changes to a requestAnimationFrame shim on OSX Mavericks?

2917
How do you disable browser Autocomplete on web form field / input tag?
4174
Which “href” value should I use for JavaScript links, “#” or “javascript:void(0)”?
1783
How to align checkboxes and their labels consistently cross-browsers
5661
Which equals operator (== vs ===) should be used in JavaScript comparisons?
1738
Retrieve the position (X,Y) of an HTML element relative to the browser window
1705
<button> vs. <input type=“button” />. Which to use?
2810
How can I know which radio button is selected via jQuery?
2265
How to make a div 100% height of the browser window
2132
Get the size of the screen, current web page and browser window
2
Explaining requestAnimationFrame shim layer