I downloaded and installed Visual Studio 2013 Profession Trial on my Windows 7 64-bit computer ( RAM is 6 GB). But, when I start it for the first time, it says 'We're getting things ready. Thanks for your patience' and its been on for about an hour. 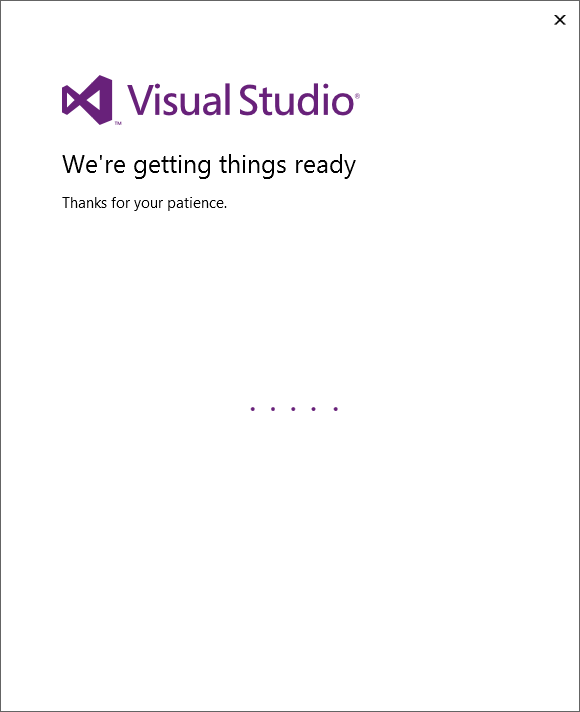 EDIT 1: I left my computer running the whole night, and by morning it had re-booted. After the re-boot, VS 2013 seems to be starting quickly. So, its hard to say why Visual Studio 2013 was taking hours to start up the first time.

If the loading is taking a long time, Alt+Tab to find a login page hidden underneath the "We're getting things ready" window. Enter your Microsoft account credentials.

This answer was originally posted by Alex K in a comment.

I had already gone past the credentials screen.

I left mine running for a while but eventually killed the process and restarted VS.

I had no sign-on screen hiding behind the "We're Getting Things Ready". I ended the task in Windows Task Manager. Then I started Visual Studio again (no need to reboot). This time I noticed the option to "Sign In later". I selected this and it started up in just a couple of minutes. I then signed in after it started up. All seems to be working fine now.

I too experienced this odd first time start up 'hang' on a fresh install to a new PC. For what it's worth, my experience mirrored bassbytesbikes. I finally just killed and restarted it. No discernible ill effect... so far.

I came across this problem installing Visual Studio Premium 2013 in a VirtualBox VM. Specifically, I'd enter my login credentials and then it would hang on the 'Preparing for first time use' screen. If I killed VS and then restarted it, it'd bring up the main window but then hang before it displayed the startup page.

The solution for me was to enable 3D graphics acceleration in the VM settings. This seems to be because IE relies on 3D graphics and VS uses IE to display the start page (among other things).

As an answer, I got the same issue while creating, openning projects at visual studio 2012. Then I searched a lot about it and I learned that they fixed that problem with Visual Studio 2013 with Update 5. I got the vs2013 with update 5 and everything works well now.

Not the answer you're looking for? Browse other questions tagged visual-studio-2013 or ask your own question.