I have spent the last 5 hours searching for an answer. Even though I have found many answers they have not helped in any way.

What I am basically looking for is a mathematical, arithmetic only representation of the bitwise XOR operator for any 32bit unsigned integers.

Even though this sounds really simple, nobody (at least it seems so) has managed to find an answer to this question.

I hope we can brainstorm, and find a solution together.

From those operators we can get...

Note: If a and b are mutually exclusive then their and condition will always be zero - from a Venn diagram perspective, this means there is no overlap. In that case, we could write OR = a + b, since a*b = 0 for all values of a & b.

AND these conditions together to get... 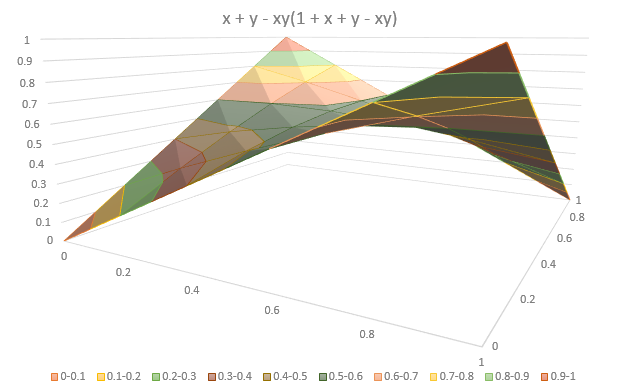 If the input values are binary, then powers terms can be ignored to arrive at simplified computationally equivalent forms.

Binary also allows other equations to be computationally equivalent to the one above. For instance...

If input is binary we can ignore powers, so...

Allowing us to write...

Any n of k

These same methods can be extended to allow for any n number out of k conditions to qualify as true.

For instance, out of three variables a, b, and c, if you're willing to accept any two conditions, then you want a&b or a&c or b&c. This can be arithmetically modeled from the composite logic...

and applying our translations...

This can be extended to any n number out of k conditions. There is a pattern of variable and exponent combinations, but this gets very long; however, you can simplify by ignoring powers for a binary context. The exact pattern is dependent on how n relates to k. For n = k-1, where k is the total number of conditions being tested, the result is as follows:

Where c1 through ck are all n-variable combinations.

For instance, true if 3 of 4 conditions met would be

This makes perfect logical sense since what we have is the additive OR of AND conditions minus the overlapping AND condition.

If you begin looking at n = k-2, k-3, etc. The pattern becomes more complicated because we have more overlaps to subtract out. If this is fully extended to the smallest value of n = 1, then we arrive at nothing more than a regular OR condition.

The actual algebraic XOR equation a + b - ab(1 + a + b - ab) is much more complicated than the computationally equivalent binary equations like x + y - 2xy and (x-y)². Does this mean anything, and is there any value to this added complexity?

Obviously, for this to matter, you'd have to care about the decimal values outside of the discrete points (0,0), (0,1), (1,0), and (1,1). Why would this ever matter? Sometimes you want to relax the integer constraint for a discrete problem. In that case, you have to look at the premises used to convert logical operators to equations.

When it comes to translating Boolean logic into arithmetic, your basic building blocks are the AND and NOT operators, with which you can build both OR and XOR.

Non-Binary Meaning of NOT

We expressed NOT as 1-x. Obviously, this simple equation works for binary values of 0 and 1, but the thing that's really cool about it is that it also provides the fractional or percent-wise compliment for values between 0 to 1. This is useful since NOT is also known as the Compliment in Boolean logic, and when it comes to sets, NOT refers to everything outside of the current set.

Non-Binary Meaning of AND

We expressed AND as x*y. Once again, obviously it works for 0 and 1, but its effect is a little more arbitrary for values between 0 to 1 where multiplication results in partial truths (decimal values) diminishing each other. It's possible to imagine that you would want to model truth as being averaged or accumulative in this region. For instance, if two conditions are hypothetically half true, is the AND condition only a quarter true (0.5 * 0.5), or is it entirely true (0.5 + 0.5 = 1), or does it remain half true ((0.5 + 0.5) / 2)? As it turns out, the quarter truth is actually true for conditions that are entirely discrete and the partial truth represents probability. For instance, will you flip tails (binary condition, 50% probability) both now AND again a second time? Answer is 0.5 * 0.5 = 0.25, or 25% true. Accumulation doesn't really make sense because it's basically modeling an OR condition (remember OR can be modeled by + when the AND condition is not present, so summation is characteristically OR). The average makes sense if you're looking at agreement and measurements, but it's really modeling a hybrid of AND and OR. For instance, ask 2 people to say on a scale of 1 to 10 how much do they agree with the statement "It is cold outside"? If they both say 5, then the truth of the statement "It is cold outside" is 50%.

The take away from this look at non-binary values is that we can capture actual logic in our choice of operators and construct equations from the ground up, but we have to keep in mind numerical behavior. We are used to thinking about logic as discrete (binary) and computer processing as discrete, but non-binary logic is becoming more and more common and can help make problems that are difficult with discrete logic easier/possible to solve. You'll need to give thought to how values interact in this region and how to translate them into something meaningful.

"mathematical, arithmetic only representation" are not correct terms anyway. What you are looking for is a function which goes from IxI to I (domain of integer numbers).
Which restrictions would you like to have on this function? Only linear algebra? (+ , - , * , /) then it's impossible to emulate the XOR operator.
If instead you accept some non-linear operators like Max() Sgn() etc, you can emulate the XOR operator with some "simpler" operators.

Given that (a-b)(a-b) quite obviously computes xor for a single bit, you could construct a function with the floor or mod arithmetic operators to split the bits out, then xor them, then sum to recombine. (a-b)(a-b) = a2 -2·a·b + b2 so one bit of xor gives a polynomial with 3 terms.

Without floor or mod, the different bits interfere with each other, so you're stuck with looking at a solution which is a polynomial interpolation treating the input a,b as a single value: a xor b = g(a · 232 + b)

The polynomial has 264-1 terms, though will be symmetric in a and b as xor is commutative so you only have to calculate half of the coefficients. I don't have the space to write it out for you.

I wasn't able to find any solution for 32-bit unsigned integers but I've found some solutions for 2-bit integers which I was trying to use in my Prolog program. One of my solutions (which uses exponentiation and modulo) is described in this StackOverflow question and the others (some without exponentiation, pure algebra) can be found in this code repository on Github: see different xor0 and o_xor0 implementations.

It may be possible to adapt and optimize this solution for 32-bit unsigned integers. It's complicated and it uses logarithms but seems to be the most universal one as it can be used on any integer number. Additionaly, you'll have to check if it really works for all number combinations.

I do realize that this is sort of an old topic, but the question is worth answering and yes, this is possible using an algorithm. And rather than go into great detail about how it works, I'll just demonstrate with a simple example (written in C):

I think this relation might help in answering your question

Not the answer you're looking for? Browse other questions tagged math boolean logic xor algebra or ask your own question.

38
XOR of three values
233
Why is there no logical xor in JavaScript?
15
What does Exclusive in XOR really mean?
50
python tilde unary operator as negation numpy bool array
0
Arithmetic mean numeric distribution from a combination of input values
1
Algorithm: constrained XOR of numbers within a range
1
What is 1 XOR 1 XOR 1?
0
VB.NET Xor + Mod
5
Xor of all pairwise sums of integers in an array