Getting: “Migrations are pending; run 'bin/rake db:migrate RAILS_ENV=development' to resolve this issue.” after cloning and migrating the project

I cloned my project. Bundled with "bundle install", then run "rake db:migrate". I am getting this error: (when I run the rails server and open my browser to localhost:3000) "Migrations are pending; run 'bin/rake db:migrate RAILS_ENV=development' to resolve this issue."

I checked all migrations one by one and all were executed without errors. Also no errors were shown after the execution of "rake db:migrate".

This is what I see when I execute "rake db:migrate:status"

I am on development environment. Please let me know if you need any other information.

Any clues what causes the error?

Interesting. Did you run rake db:create? Assuming you are using sqlite3, do this:

Also, can you list the contents of your config/database.yml file?

Edit: Warning! Obviously, you will lose your existing data.

After running the migrate command, I still had the same error.

What worked for me was to just stop the rails server and start it again.

1. Maybe its default in ruby2/rails4 but have you tried: bundle exec rake db:migrate?

2. Another option would be resetting the whole database - use with CAUTION! resets all the data as well - bundle exec rake db:migrate:reset

+) I would just make sure that you are executing everything in the same development env:

Running rake db:migrate RAILS_ENV=test did it for me

I had the same error in the browser, but upon closely looking at the error message, I noticed some how I had an extra white space in the migrate comment and post files. Once I removed it, it worked perfectly.

Open the database and click schema_migration table. The migrations will be listed as below. 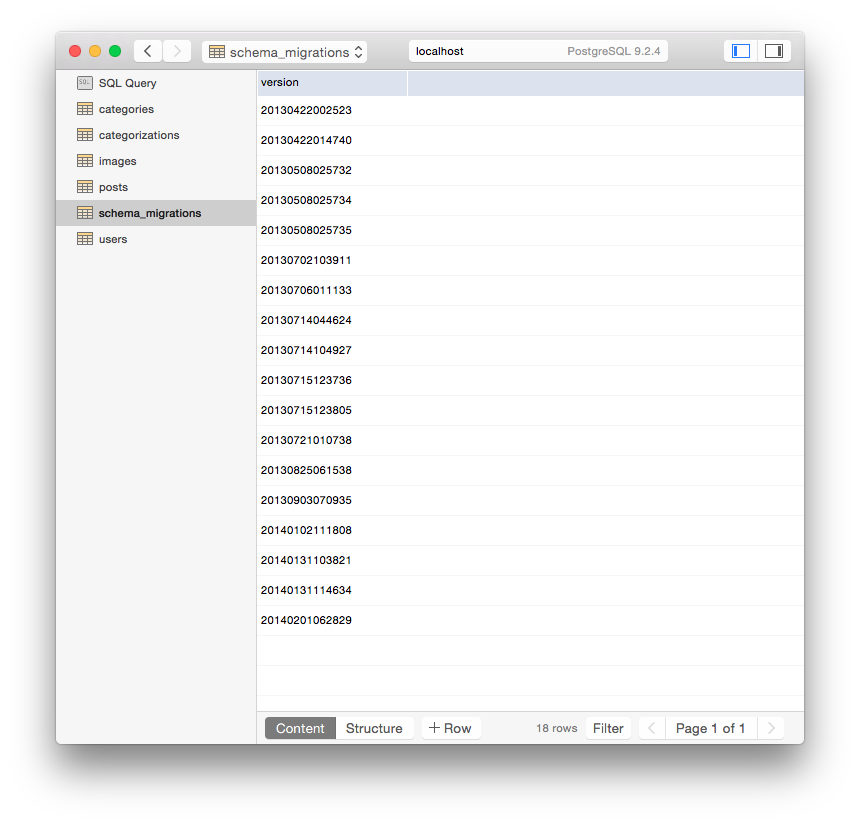 I got the same error working on the Learn Enough to Be Dangerous Rails tutorial. I'm using Git Bash terminals on a Windows 10 machine. The error showed up in the terminal where I'm running guard, after I tried to migrate my db using the command (in another terminal):

After trying the solution offered by @lewstherin, I still got the same error. I tried the command:

$ rails test And got the explicit and helpful warning:

Migrations are pending. To resolve this issue, run:

I ran the command:

Here's what worked for me: -gem install rails -v 4.1.0 Inside Gemfile: -gem 'rails', '4.1.0' (replace the newer/older with this) Do bundle install and update -bundle install -bundle update In your application.rb : Remove/Comment - config.active_record.raise_in_transactional_callbacks = true

run bundle rake: -bundle exec rake db:migrate Refresh your page and the error should be gone.

Two reasons 'db:migrate:reset' did not work for me

So What I tried is to update the 'scheema_migrations'(mysql) table with the list of migrations(just version values) that I was really sure were already run on my db(development), this can be lil time consuming process but it works. I would not attempt this on production though.

I'm guessing the error is that you are creating a table that already exists, I had this problem before. Step 1 look into the error when you rake dv:migrate

Step 2 go to the model where this table is created

Step 3 remove the drop_table once the your migration is done

I had this problem and it was because I had my rails files inside a folder named "[rails]". It seems rake doesn't like the following symbols "[]" used in a folder name.

Hope this helps others with this issue.

I had the same problem in genieacs and this code helped:

For me i just had to migrate for the error:

By setting false to config.active_record.migration_error in development.rb might make it workable but i wouldn't recommend it.

You can always run rake db:reset

Not the answer you're looking for? Browse other questions tagged ruby-on-rails ruby-on-rails-4 dbmigrate or ask your own question.