How to localize the images in Images.xcassets?

We can localize an image in the File Inspector using Localize... like this: 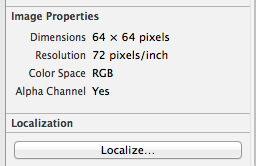 Then we can get this:

If you are using an Asset Catalog:

Asset catalog elements are now localizable. In the information panel for an asset, there is a "Localization" section that lists all the languages you've set up for your project in the project settings. If you don't select any of them, your images will be deemed "universal" (i.e., they will adopt the default behavior). If you select one or more of them, you will be able to select different images for "universal" and any alternate language.

For example, if your base language is English, and you want Spanish-language alternates, select only "Spanish" and drag in the alternate versions in the Spanish wells, and leave the English versions as the Universal. Then, at run-time, if the chosen language is Spanish, then the Spanish-language image will be pulled. Otherwise, it will pull the English version. (Or, if you want specific English and Spanish versions that are both different from "everything else", also check English and drag in the corresponding English and Universal images.)

If you need to determine localized images at run time without using the Asset Catalog:

While there's (apparently) not currently a way to explicitly localize the xcassets file directly, you could instead localize the name of the asset to pull using your Localizable.strings file. For instance, say you have a graphic logo treatment for the main menu of a game that needs to be localized. You could put the localized logo treatments in the assets file with different names, add the names to your Localizable.strings file, and then fetch the appropriate image with code like this:

That "Localize..." button is back in Xcode 11! So now you can localize your images and assets in the Asset catalog as you expect: 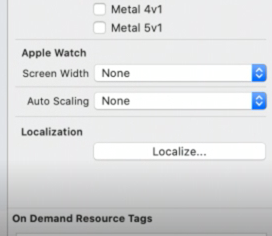 When Apple gives you lemons, make lemonade, or in this case, lemonade_en, lemonade_es or whatever suits your needs.

First, I create an entry for each desired language in my assets file like so:

Next, you will need to get a language code for the device. The important thing to remember here is that the user may have an unsupported language, so if that is the case, return your default (I use English).

The following extension of UIApplication will handle all of this for you:

This extension does the following:

Now, we combine the two to get the proper image:

After some search on the Internet, I think this feature is not provide by xcassets right now. Therefore, just don't use xcassets to manage your localization images.

I found another way:

Not the answer you're looking for? Browse other questions tagged ios localization or ask your own question.

1060
How to change the name of an iOS app?
1031
Constants in Objective-C
1752
How can I make a UITextField move up when the keyboard is present - on starting to edit?
884
How to check iOS version?
1444
Passing data between view controllers
534
How to get the screen width and height in iOS?
1284
performSelector may cause a leak because its selector is unknown
1047
How to change Status Bar text color in iOS
783
Xcode process launch failed: Security
896
Xcode error "Could not find Developer Disk Image"