Error: "The sandbox is not in sync with the Podfile.lock..." after installing RestKit with cocoapods

The sandbox is not in sync with the Podfile.lock. Run 'pod install' or update your CocoaPods installation.

I tried running pod install, but no change.

Here are some shots: 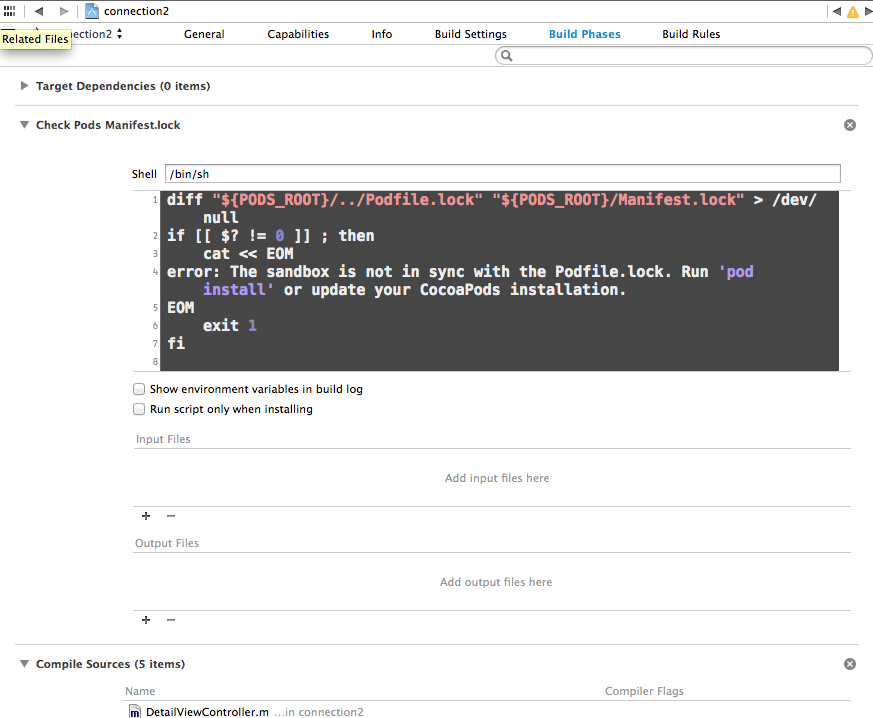 I was able to fix that by updating CocoaPods.

After many attemps I managed to fix this problem. Variable ${PODS_ROOT} was not set and I do below trick. Go to Build Phases -> Check Pods Manifest.lock and replace

I had been searching for hours and I found solutions as follow:

In my case, method 1 works.

If you remove all pods from your target in the Podfile, e.g.

Cocoapods (current stable version 0.37.2) does not perform this cleanup when you run pod install.

Removing pods from the project and re-installing worked for me.

There is nice GitHub repository that can completely remove the pods from the project.

Just keep the backup of your PodFile and run below commands.

If you are seeing an error like the following:

Then there's a problem with Cocoapods in your project. Sometimes cocoapods can get out of sync and you need to re-initiate cocoapods. You should be able to resolve this error by:

My problem was xcconfig with old target names.

It would update to new ones.

Also if you had missing .h files that's the reason (pods header search path is in these xcconfig)

I found my solution: Run:pod update instead of pod install. The error was fixed!

The Podfile holds either the (optimistic or exact) versions of every dependency you have. The lock file holds only exact versions.

Once you do pod install all the pods get downloaded/installed into the /pods directory. You may want to commit them Or maybe not. That's up to your team. What's NOT up to your team is decide if they should commit the the Podfile.lock or not. That needs to be committed so every dev in the team can be sure they've got the exact same version.

This is where the Manifest.lock comes into play. Manifest.lock is your local machine's lock created. It has to match with Podfile.lock that is generated by the last commit (that caused changes in for your pods) in your repo. If it doesn't match then something is messed up.

Docs on what the Manifest.lock file is:

I honestly can only think of one scenario in which the Manifest.lock and Podfile.lock would be out of sync:

I mean if you pull from main branch, then you get main's Podfile and lock file. If you then make a change to the Podfile and then run pod install, then you would be updating the Podfile.lock and Manifest.lock and will keep them in sync. No issues with this

Is this just so that if:

That script is documented here

The fix is likely super simple, just make sure you Podfile is what you want. Then just run pod install. You have also somehow accidentally made changes to your Manifest.lock inside your /Pods directory (or as mentioned earlier maybe only committed the lock file but not the Podfile or vice versa). Deleting /Pods directory causes no harm. Just do a pod install after. Do not do pod update unless that's what you want.

Just make sure you never delete the Podfile.lock otherwise if you do pod install then it would update all dependencies to the latest version it can.

Also helpful to see and this video on lock files, CocoaPods docs on how the lock file is put to use differently for pod install vs. pod update and last see how all that logic is used in more detail this artsy blog on checksums. It's worth noting that a single space will create a new checksum and can make things out of sync.

In my case, I got same error after integrating WatchKit app. To solve problem I needed to add both targets of WatchKit in Podfile:

PS: Maybe this happened for me because I mistakenly installed pods for MyProject WatchKit App target initially.

Run this, and your errors will vanish

I encountered this issue with a misconfigured xcconfig file.

The Pods-generated xcconfig was not correctly #included in the customise xcconfig that I was using. This caused $PODS_ROOT to not be set resulting in the failure of diff "/../Podfile.lock" "/Manifest.lock", for obvious reasons, which Pods misinterprets as a sync issue.

For me the problem was that I made a new target in my app by duplicating an existing one, but forgot to add the target to the Podfile. For some reason, the cloned target did work for days without problems, but after a while it failed to build by this error. I had to create a new target entry for my cloned project target in the Podfile then run pod install.

If you download the project from github or copy from other place, then the dependencies library do not exists, there will be this issue.

You just need to cd to the project/project_name directory in terminal , use ls to check whether there is a Podfile file.

if there exists the Podfile, you just need to install the dependencyies:

My working answer is:

Can you try this:

Also make sure you open the .xcworkspace file rather than the project file (.xcodeproj) when working with pods. That should solve any errors with linking such as "Apple Mach -O Linker command failed"

Please do the following steps:

1: Deleting the Podfile.lock file in your project folder

2: Deleting the Pods folder in your project folder

I tried everything, but the problem persisted. After that I did this and it worked ASAP (As Smooth As Possible).

Completely nothing worked out for me from these answers. Had to create the project again by running cordova platform add ios. What I've noticed, even freshly generated project with (in my case) Firebase pods caused the error message over and over again. In my opinion looks like a bug for some (Firebase, RestKit) pods in Xcode or CocoaPods. To have the pods included I could simply edit my config.xml and run cordova platform add iOS, which did everything for me automatically. Not sure if it will work in all scenarios though.

Edit: I had a Podfile from previous iOS/Xcode, but the newest as of today have # DO NOT MODIFY -- auto-generated by Apache Cordova in the Podfile. This turned on a light in my head to try the approach. Looks a bit trivial, but works and my Firebase features worked out.

This made my day!

1- you are in the correct directory. Most times, when a github project is downloaded, there will be a master folder. You need to be inside the actual project name folder(masterfolder/project folder) in the terminal before you invoke pod install --verbose

My problem was the cocoa pods version so I installed the latest with: sudo gem install cocoapods --pre Then pod update

That worked for me

If you are applying to the way Project Cleanup and your project still error.

You can go to tab Build Phases and then Find Check Pods Manifest.lock and remove the script.

Probably, base on a situation you can remove file your_project_name.xcworkspace

Hopefully, this solution comes up with you. Happy coding :)

I had same error. First I update cocoapods using

then install pods using Pod install command worked for me.

I faced this problem in a Flutter project. I just opened iOS Module in xCode and Build Clean Folder worked for me.

I had the same issue with Ionic-3, I did some above mention steps but none of them worked for me.

For Ionic Remove the ios platform

Open xcode then try to build. this worked for me :-)

1292
Xcode - How to fix 'NSUnknownKeyException', reason: … this class is not key value coding-compliant for the key X" error?
261
ERROR: Error installing cocoapods: ERROR: Failed to build gem native extension
5
Cocoapods <RestKit/RestKit.h> not found
418
Cocoapods Warning - CocoaPods did not set the base configuration of your project because because your project already has a custom config set
0
Build error with pods only for test target
25
The sandbox is not in sync with the Podfile.lock-ios
2
RestKit Giving Error after installation as a Git Submodule
1
Cocoapods Errors : Resource.sh not found
60
could not find compatible versions for pod