I find that in various situations Objective-C code in Xcode 3.1 (Leopard) can fail to get appropriate syntax coloring after typing or lose coloring that it had.

Sometimes CMD-a to select all text on the code page will make the coloring (re)appear, sometimes double-clicking on a line to select it will work, sometimes I have to add/delete a space in a symbol to get that symbol to (re)color. Rebuilding, or closing/reopening the project may or may not work.

Is this a known issue with Xcode? For something so annoying to me, I'm not finding the plentiful discussions of it on SO and elsewhere I'd expect.

And is there any command to force global syntax recoloring?

3.) Close and reload the project

5.) Wait a moment until XCode rebuild all indicies

3.) I saw "file not found" errors for header files mentioned in the pch file (therefore the fix above)

I had the same issue with a project that was fine in Xcode 3 and for which the syntax highlighting and code completion has broken in Xcode 4. It took me the better half of the day to figure it out but I found that the following steps will reproduce / fix the issue 100% for me.

After trying all the aforementioned solutions to no avail, I tried creating the project from scratch and reimporting every file and folder painstakingly. Every time I imported a couple of files I checked and syntax highlighting still worked. Even after the last few of them it still did. Then I hit build which failed because I forgot to include a couple of common header files in the project .pch file that were there in the old project. And that was when CodeSense broke again.

After further investigation we found that if you import a header file that in turn imports the same framework header file than the .pch already does, then CodeSense will break. The same setup did not cause any issues in Xcode 3.

So by removing the wholly unnecessary

directive from the 'projectConfig.h' you can fix the highlighting and code completion will come back for you as well. If your issue is the same as mine that is.

Just select the file who lost the syntax coloring , press Editor > Syntax Coloring > ( choose your language (Objective c++ for ex) instead of 'Default'

I have found the best way to regain syntax coloring is just to quit Xcode and re-launch it. I couldn't tell you why, but that works every time.

I find that the following will often do the trick…

"Reselect" both "Base SDK" - and "Architecture" - in "Build Settings". (CLick on blue project icon in top left, while in "Browser mode", aka ⌘1, then click project settings and mess with the stuff there.

Make sure they all line up / it doesn't hurt to do a little toggly-wogglying up in there, while you're in there… ya know just mix it up a bit. You'll notice xCode has a teensy-tiny mini-stroke - every time you switch between 64 and 32 bit… This is usually when I know if code highlighting is dead for the night, or if I'm good to go.

Often, I will have a project that gets highlighted instantly in 32 bit mode, and just sits there in 64… Who knows.. Ahh, Xcode, you wacky botch.

I can confirm a 100% fix for this problem, based on a question I had asked (and actually answered), as pictured below. One thing i will add is that sometimes it is "errant whitespace" that can also contribute to the loss of highlighting. Either clean it up yourself, or use the Goggle Toolbox for Mac Xcode 4 plugin, which adds an entry in the XCode Edit menu called Clean Up Whitespace. 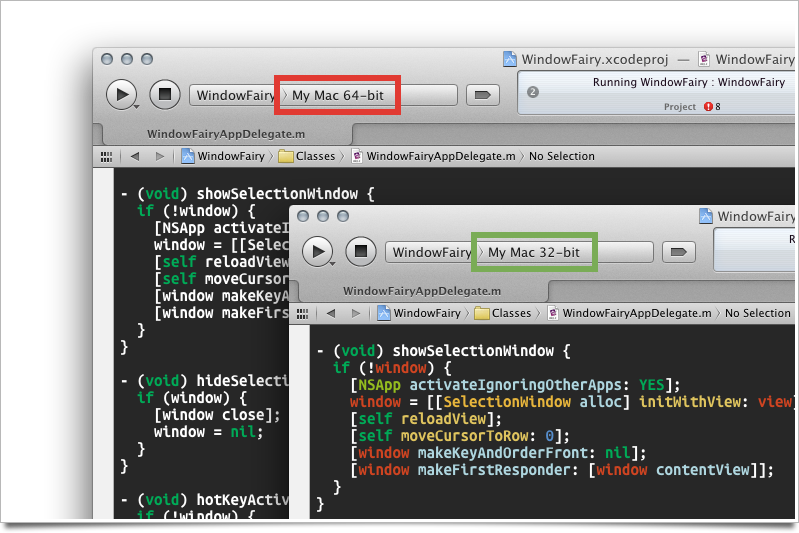 This appears to be a similar error from this question

I was able to correct this issue by setting Precompile Prefix Header to No in the build settings.

I recently had a similar issue, all coloring and autocomplete stopped working for built-in frameworks, my own classes still worked. Someone recommended to me that I turn off "Run Static Analyzer" in the build settings. It's weird, but it worked.

If your app delegate still has code sense, this might be the case for you too. Go into project, select the 'Tests' target search 'prefix' and set it to the equivalent value in the 'app' target.

Open the project settings (Project > Edit Project Settings menu) and then click the Rebuild Code Sense Index button in the General tab. This will recreate the index that Xcode uses for syntax coloring.

This process can take a while for larger projects, so you can check the progress in the Activity window (Window > Activity menu).

Moreover, in XCode4 there is no button to rebuild the code sense index.

I had the same problem and solved this by updating my build settings to use the system default compiler, LLVM GCC 4.2.

It seems there are multiple factors.

I experience this issue as well, and have tried the solutions either "rebuilding the index", "relaunch XCode", "change the compiler setting to LLVM GCC 4.2". Those didn't help me out.

So I tried to add the following code right away along with the fresh creation of header file.

Then, the code added earlier in header file is colorized, and it can recognize classes and stuff.

I've used cocos2d-x, so my syntax is based on c++. I don't test it with Objective-c yet though.

For someone still have don't know why. Let open with XCode 8.2, it should work

Not the answer you're looking for? Browse other questions tagged xcode syntax-highlighting or ask your own question.