Which files should I include in .gitignore when using Git in conjunction with Visual Studio Solutions (.sln) and Projects?

The .gitignore for Visual Studio can be found here:
https://github.com/github/gitignore/blob/main/VisualStudio.gitignore

There's an online tool which allow you to generate .gitignore file based on your OS, IDE, language, etc. Take a look at http://www.gitignore.io/. 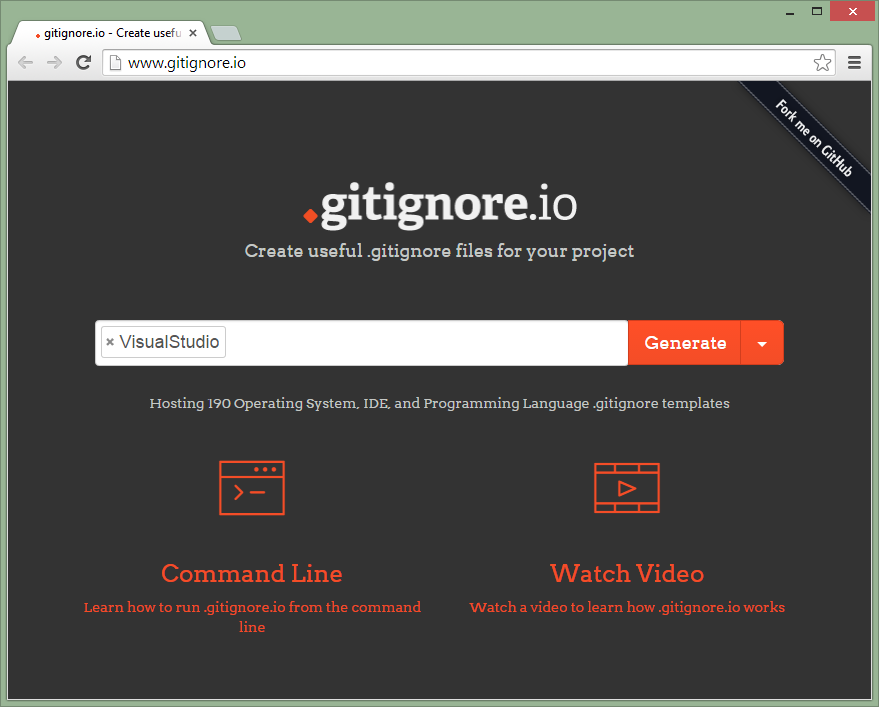 I use the following .gitignore for C# projects. Additional patterns are added as and when they are needed.

For those interested in what Microsoft thinks should be included in the gitignore, here's the default one which Visual Studio 2013 RTM automatically generates when creating a new Git-Repository:

While you should keep your NuGet packages.config file, you should exclude the packages folder:

I typically don't store binaries, or anything generated from my source, in source control. There are differing opinions on this however. If it makes things easier for your build system, do it! I would however, argue that you are not versioning these dependencies, so they will just take up space in your repository. Storing the binaries in a central location, then relying on the packages.config file to indicate which version is needed is a better solution, in my opinion. 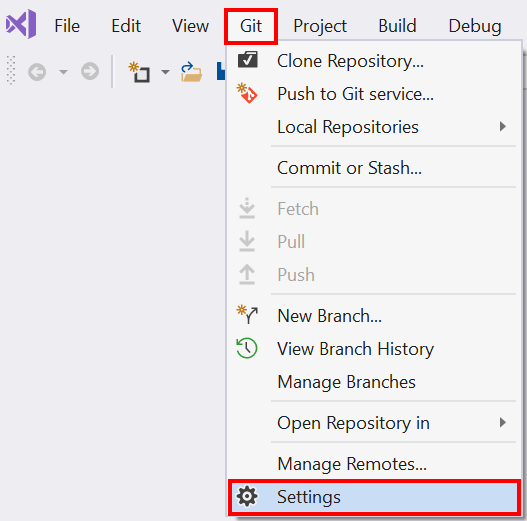 The above will open Visual Studio’s Options with Source Control > Git Global Settings selected. From the list on the left select Git Repository Settings and then click the Add button for Ignore file. 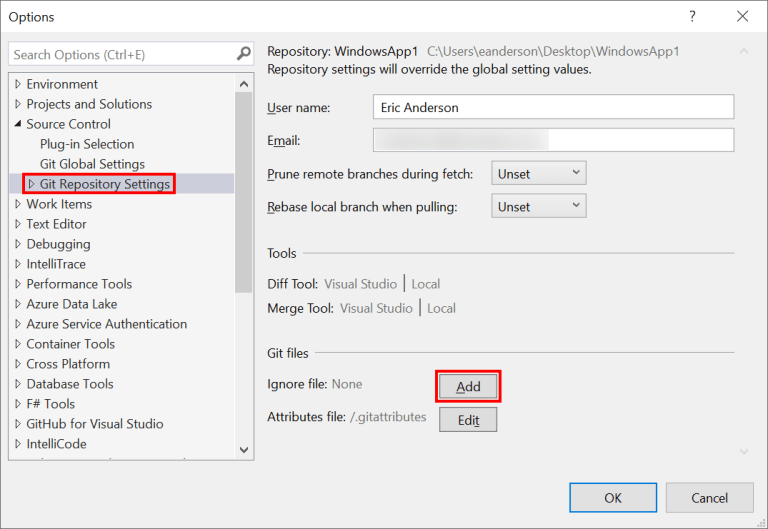 The above will add (and stage for committing) a .gitignore file with all the proper files ignored for a typical Visual Studio setup.

Note that if you already have a .gitignore file in your repo root, the "Add" button will instead say "Edit" and pressing that button will simply open the file without updating it, which isn't very helpful. In this case you could first rename your .gitignore file, click the Add button, unstage the new .gitignore file, and then merge in your saved copy changes however you'd like.

I understand this is an old question, still sharing an information. In Visual Studio 2017, you can just right click on the solution file and select Add solution to source control 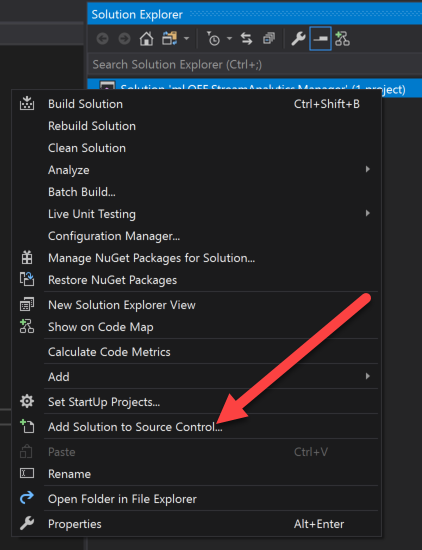 This will add two files to your source folder.

This is the easiest way.

I prefer to exclude things on an as-needed basis. You don't want to shotgun exclude everything with the string "bin" or "obj" in the name. At least be sure to follow those with a slash.

And only because I use ReSharper, also this: 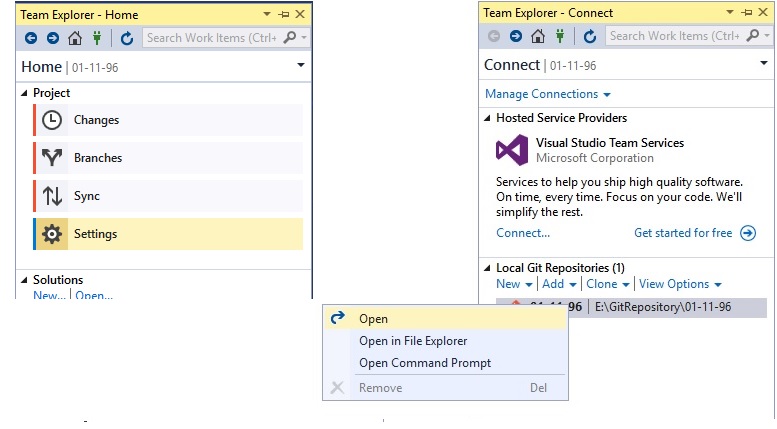 Added InstallShield ignores for the build deployment. InstallShield is the new direction Microsoft is headed over Visual Studio Installer, so we've started using it on all new projects. This added line removes the SingleImage installation files. Other InstallShield types may include DVD distribution among others. You may want to add those directory names or just [Ee]xpress/ to prevent any InstallShield LE deployment files from getting into the repo.

Here is our .gitignore for VS2010 C# projects using Install Shield LE with SingleImage deployments for the installer:

I know this is an old thread but for the new and the old who visit this page, there is a website called gitignore.io which can generate these files. Search "visualstudio" upon landing on the website and it will generate these files for you, also you can have multiple languages/ides ignore files concatenated into the one document.

Here's an extract from a .gitignore on a recent project I was working on. I've extracted the ones that I believe are related to Visual Studio, including the compilation outputs; it's a cross platform project, so there are various other ignore rules for files produced by other build systems, and I can't guarantee that I separated them out exactly.

Perhaps this question should be Community Wiki, so we can all edit together one master list with comments about which files should be ignored for which types of project?

Credit to Jens Lehmann for this one - if you keep source directories separate to your compiler project files and build output, you could simplify your .gitignore by negating it:

You don't say what language(s) you're using, but the above should work for C++ projects.

Late to the party here, but I also find that I use the following. Some may only be useful for hiding sensitive files when pushing to a public remote.

You can create or edit your .gitignore file for your repo by going to the Settings view in Team Explorer, then selecting Repository Settings. Select Edit for your .gitignore.

It automatically creates filters that will ignore all the VS specific build directories etc. 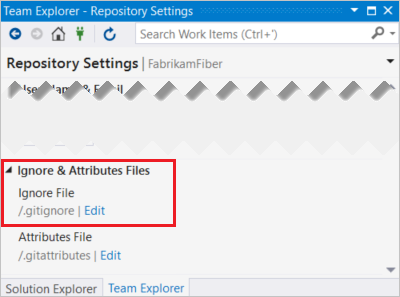 More info have a look here.

If you are using a dbproj in your solution you will want to add the following:

There is a shortcut in Visual Studio, because it supports Git out of the box in 2015 or above. For new solutions (or some which don't have .git folder) use source control features in Solution Explorer:

Right-click on your solution and select Add Solution to Source Control... item in the popup menu.

It automatically initializes .git repository, adds .gitignore with necessary things to your solution and even .gitattributes file (line endings, etc.).

The text will appeared in the VS console:

Here is what I use in my .NET Projects for my .gitignore file.

This is pretty much an all MS approach, that uses the built in Visual Studio tester, and a project that may have some TFS bindings in there too.

As mentioned by another poster, Visual Studio generates this as a part of its .gitignore (at least for MVC 4):

Since your project may be a subfolder of your solution, and the .gitignore file is stored in the solution root, this actually won't touch the local database files (Git sees them at projectfolder/App_Data/*.mdf). To account for this, I changed those lines like so:

It should depend on the project or language you are using. So extensions related to build, vs folder , sln file , bin folder etc are to be included. For full list of git ignore files you can check this repo gitignore for visual studio

Some project might want to add *.manifest to their visual studio gitignore.io file.

That is because some Visual Studio project properties of new projects are set to generate a manifest file.

But if you have generated them and they are static (not changing over time), then it is a good idea to remove them from the .gitignore file.

On Windows, it is possible to embed additional metadata into an executable by linking in a "manifest", i.e. an XML document that describes capabilities and requirements (such as minimum or maximum Windows version).
These XML documents are expected to be stored in .manifest files.

At least some Visual Studio versions auto-generate .manifest files when none is specified explicitly, therefore we used to ask Git to ignore them.

However, we do have a beautiful .manifest file now: compat/win32/git.manifest, so neither does Visual Studio auto-generate a manifest for us, nor do we want Git to ignore the .manifest files anymore.

944
Git ignore file for Xcode projects
4059
Undoing a git rebase
1425
ignoring any 'bin' directory on a git project
2751
How do I make Git ignore file mode (chmod) changes?
2506
How do I show the changes which have been staged?
1282
Difference between Build Solution, Rebuild Solution, and Clean Solution in Visual Studio?
2505
What are the differences between .gitignore and .gitkeep?
1706
.gitignore is ignored by Git
1376
What should be in my .gitignore for an Android Studio project?