How to delete an app from iTunesConnect / App Store Connect

I submitted a brand new app to AppStore and it got rejected by the Lords ... (nothing new there). What I want to do is delete that app completely from my itunesconnect account. I don't know what apple recently changed but in the past once the app was rejected I use to see a "delete" button on the summary page. Now I don't see one anymore.

I even checked Apple official documentation HERE and that too says that I should be able to delete it from appstore using delete button as long as the app is in reject state but the delete button is no where to be found.

I already tried removing it from all territories under "rights & pricing" and availability date is in the past Jan 22nd, 2014 ... still no delete button is visible.

How can I remove it?

Note: there were no in-app purchases or game center. 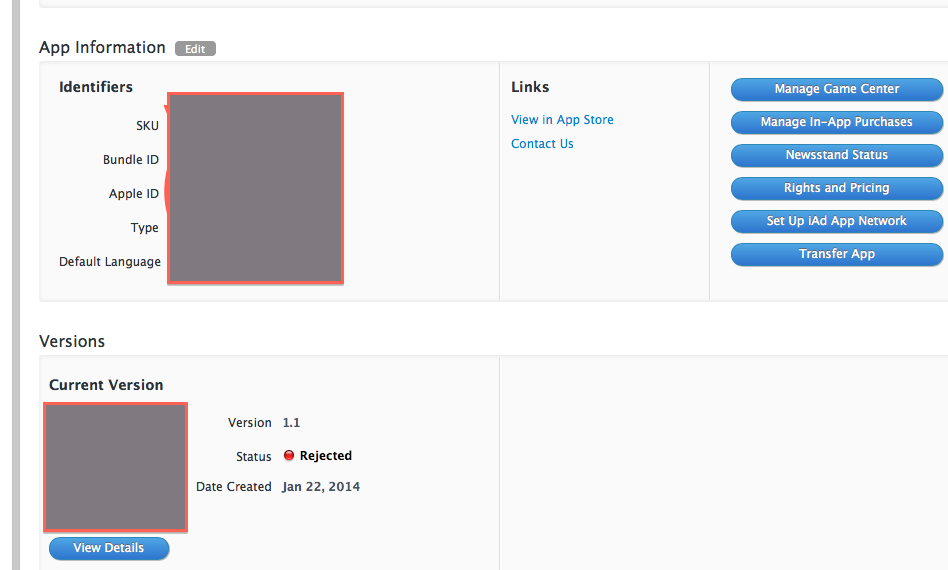 Here's the answer to my question I got back from Apple support.

You can only delete an app from the App Store if it was previously approved (meaning has one approved version).

Apps that have not been approved yet can’t be deleted; instead, reject the app.

As of 2016, new changes have been made to iTunes Connect. Here are the screenshots of deleting an approved app from your account. 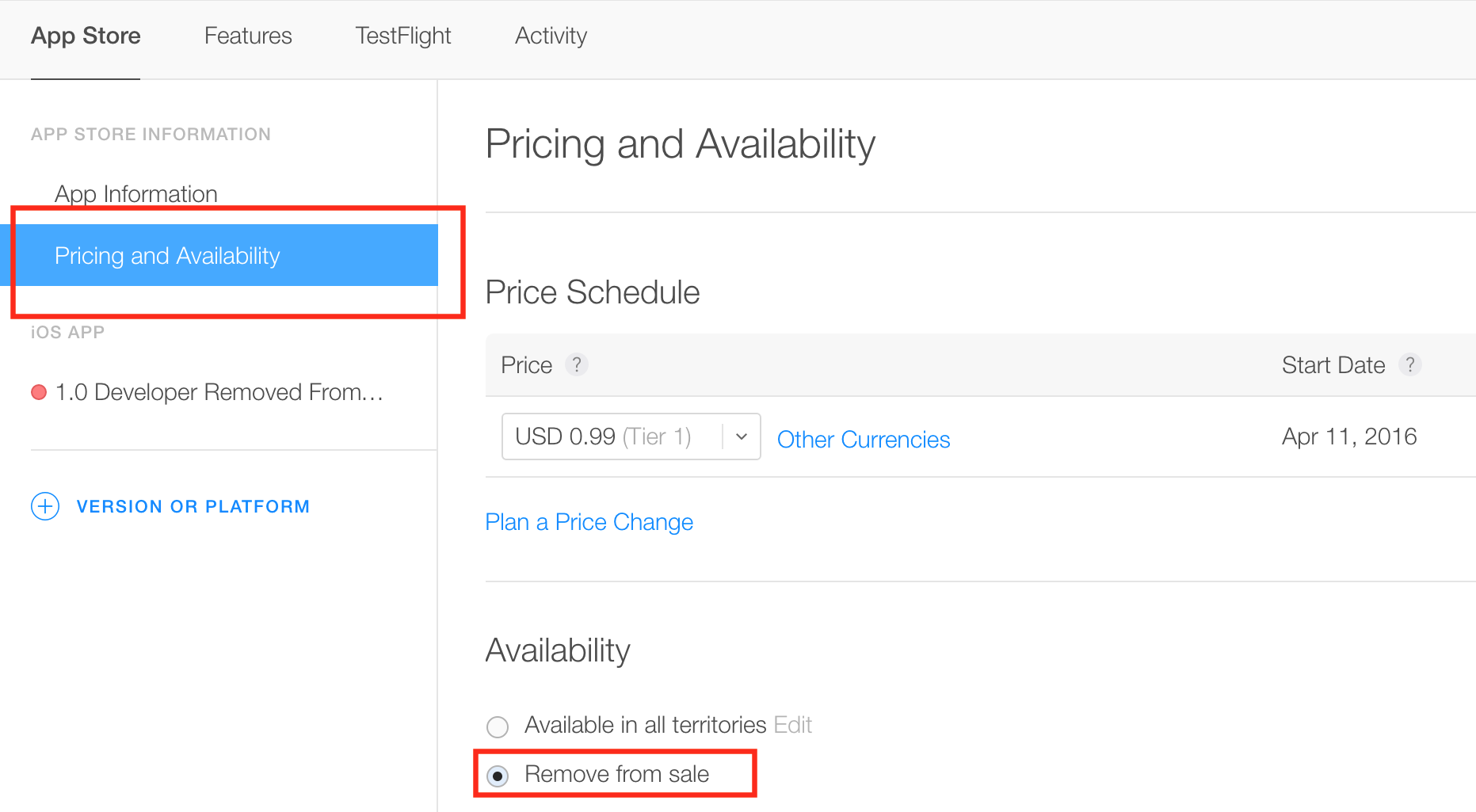 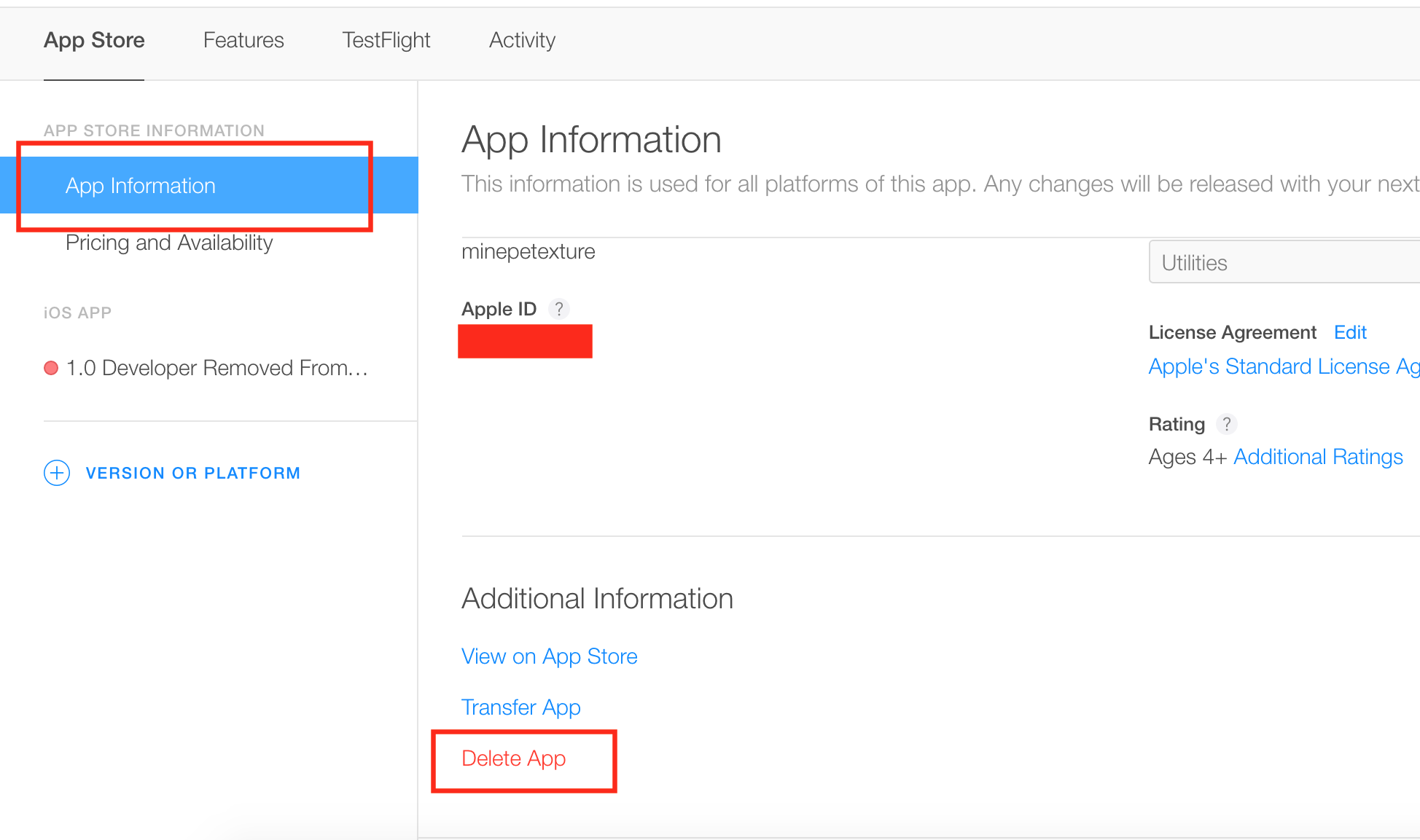 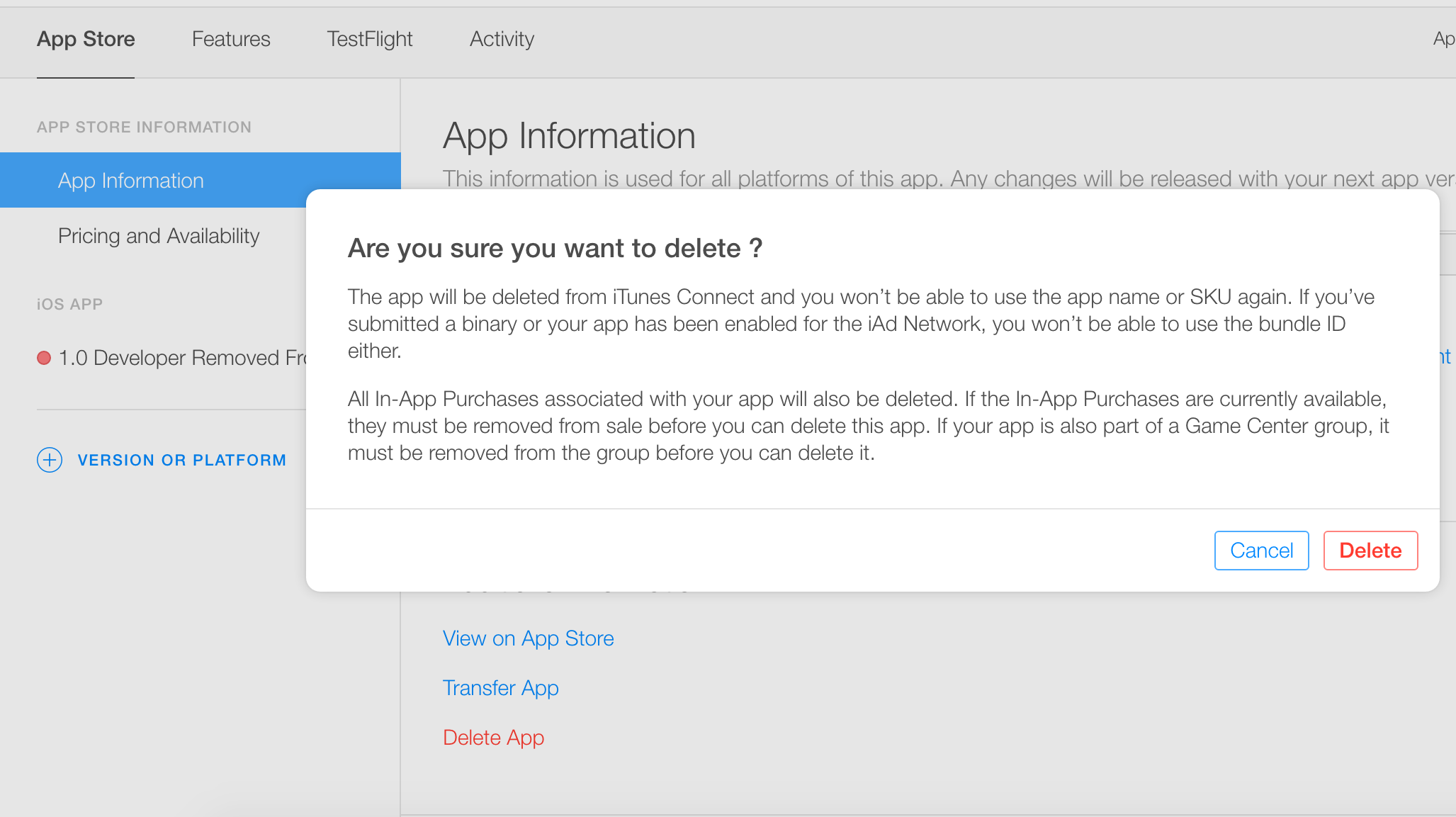 Edit December 2018: Apple seem to have finally added a button for removing the app in certain situations, including apps that never went on sale (thanks to @iwill for pointing that out), basically making the below answer irrelevant.

Edit: turns out the deleted apps still appear in Xcode -> Organizer -> Archives and there is no way to delete them from there even if there are no archives! So more looks like a fake delete of sorts.

Currently (Edit: as of July 2016) there is no way of deleting your app if it never went on sale.

However, all information except for SKU can be edited and thus reused for a new app, including the app name, Bundle ID, icon, etc etc. Because SKU can be anything (some people say they use numbers 1, 2, 3 for example) then it shouldn't be a big deal to use something unrelated for your new app.

(Honestly though I'm hoping Apple will fix this soon. I almost hear some Apple devs finding excuses for not implementing it (you know, it will break the database and will kill innocent pandas) and some managers telling the devs to just frigging do it regardless.)

You Can Now Delete App.

On October 4, 2018, Apple released a new update of the appstoreconnect (previously iTunesConnect).

It's now easier to manage apps you no longer need in App Store Connect by removing them from your main view in My Apps, even if they haven't been submitted for approval. You must have the Legal or Admin role to remove apps.

From the homepage, click My Apps, then choose the app you want to remove. Scroll to the Additional Information section, then click Remove App. In the dialog that appears, click Remove. You can restore a removed app at any time, as long as the app name is not currently in use by another developer.

From the homepage, click My Apps. In the upper right-hand corner, click the arrow next to All Statuses. From the drop-down menu, choose Removed Apps. Choose the app you want to restore. Scroll to the Additional Information section, then click Restore App.

You can show the removed app by clicking on all Statuses on the top right of the screen and then select Removed Apps. Thank you @Daniel for the tips. 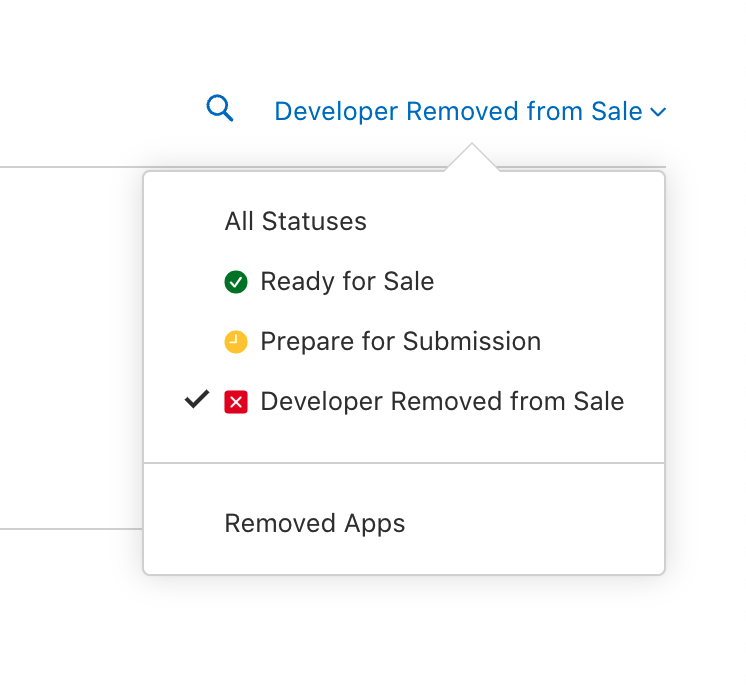 you can only remove apps if all versions of that app are in one of the following states: Prepare for Submission, Invalid Binary, Developer Rejected, Rejected, Metadata Rejected, Developer, Removed from Sale.

As per 2018 in App Store Connect. We can delete/remove application with following stats. 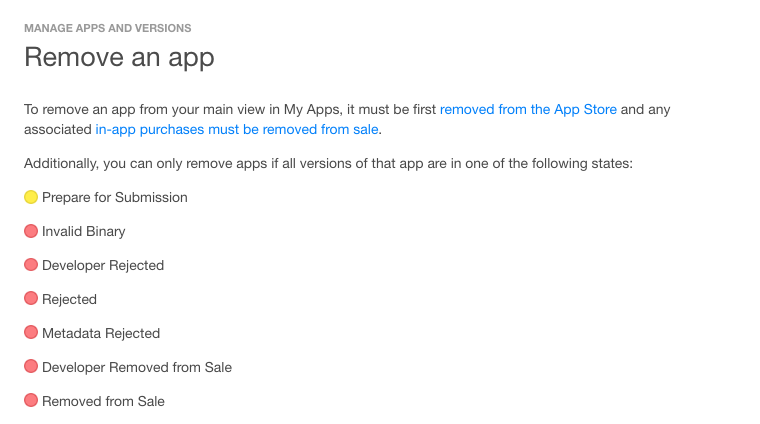 So, from now onwards we can delete our test applications too from app store connect. 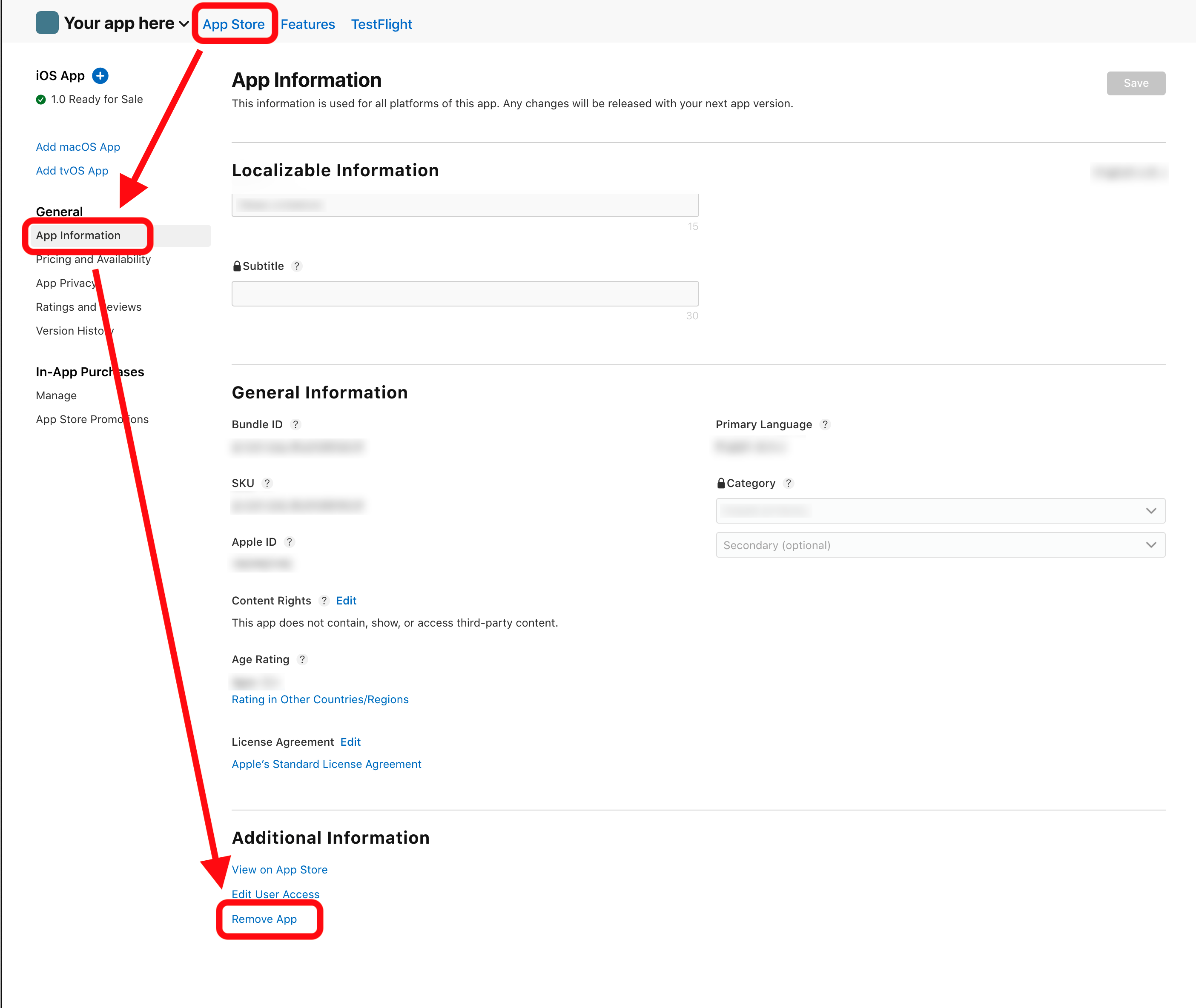 As the instructions state on the iTuneconnect Developer Guidelines you need to ensure that you are the "team agent" to delete apps. This is stated in the quote below from the developer guidelines.

If the Delete App button isn’t displayed, check that you’re the team agent and that the app is in one of the statuses that allow the app to be deleted.

To fix it, instead of deleting it(which you can't) I just changed the name of the dummy app to something random and hit SAVE. Then I was able to add the new app with the proper name

Apps can’t be deleted if they are part of a Game Center group, in an app bundle, or currently displayed on a store. You’ll want to remove the app from sale or from the group if you want to delete it.

1093
How to change the name of an iOS app?
751
How to link to apps on the app store
6
Submitting third version of an iOS app via iTunesConnect before app goes live
40
iOS 8 removing build from review in iTunesConnect
5
Cannot Delete App binary in ItunesConnect
0
how to free unsubmitted iOS app name for App Store use
5
How to remove app from itunes connect
0
Apple app store build submission for review in new itunesconnect
1
iTunes Connect - App Store Territories
3
How to upload another version of app to itunesconnect?