Where is Developer Command Prompt for VS2013?

Previously, I was using Visual Studio 2012. It had developer command prompt installed by default.

For some reason, it doesn't properly add an icon when running Windows 8+. Here's how I solved it:

Double-click the shortcut (or go to the folder above).

From that folder, copy the shortcut named Developer Command Prompt for VS2013 (and any others you find useful) to the first directory (for the Start Menu). You'll likely be prompted for administrative access (do so).

Once you've done that, you'll now have an icon available for the 2013 command prompt.

From VS2013 Menu Select "Tools", then Select "External Tools". Enter as below:

I used a modified version of this answer - based on my experiences adding it to VS 2010:

Now you have command prompt access under the Tools Menu.

You can simply go to Menu > All Programs > Visual Studio 2013. Select the folder link "Visual Studio Tools". This will open the folder. There is bunch of shortcuts for command prompt which you can use. They worked perfectly for me.

I think the trick here might be there are different versions for different processors, hence they put them all together.

I don't know if this changed recently -- the answer given by Samuel did not apply to me even though that link seemed authoritative.

A couple of things

2) It seems the Windows 8 (or 8.1 at least) cannot display sub-folders. I tried creating a folder underneath the Visual Studio 2013 folder with shortcuts, and the entire folder just didn't show.

3) Which is why what is installed is a shortcut. Not sure what the windows 7 behavior is with a shortcut in the start menu, but the apps menu just displays it like a folder. When you click on it, it brings you to the so-called missing shortcuts in explorer.

You'll also be able to just start typing from the start screen VS2013, and the icons will now show up.

Works with VS 2017
I did installed Visual Studio Command Prompt (devCmd) extension tool.
You can download it here: https://marketplace.visualstudio.com/items?itemName=ShemeerNS.VisualStudioCommandPromptdevCmd#review-details

Double click on the file, make sure IDE is closed during installation.
Open visual studio and Run Developer Command Prompt from VS2017

I'm using VS 2012, so I navigated to "C:\ProgramData\Microsoft\Windows\Start Menu\Programs\Microsoft Visual Studio 2012\Visual Studio Tools" and ran as administrator this "Developer Command Prompt for VS2012" shortcut. In command shell I pasted the suggested

and as I suspected this did not yield any success on Windows 10: 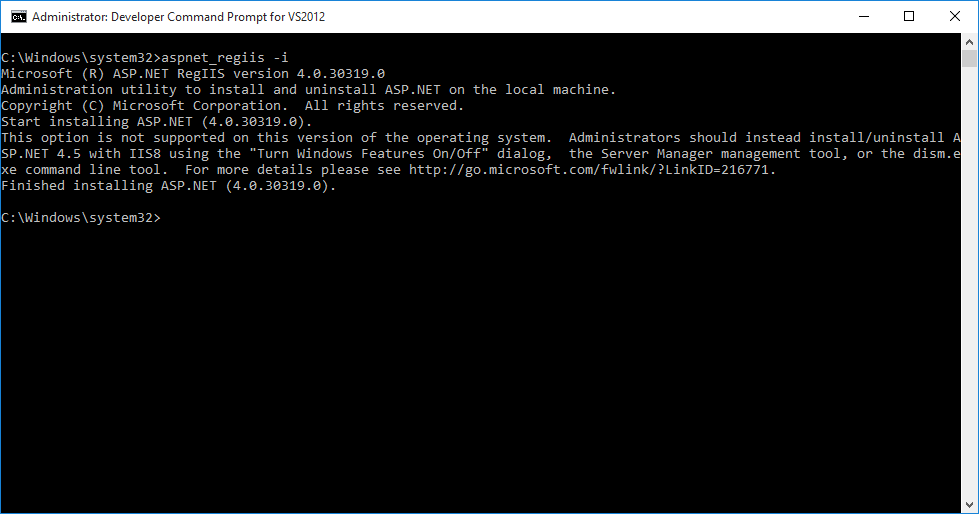 So all I needed to do was "Turn Windows Features On/Off" at Control Panel and restart my machine to effect the changes. That did resolve the issue. Thanks.

Not the answer you're looking for? Browse other questions tagged visual-studio visual-studio-2013 or ask your own question.

407
Found conflicts between different versions of the same dependent assembly that could not be resolved
348
How can I switch my signed in user in Visual Studio 2013?
227
How do I find the PublicKeyToken for a particular dll?
130
Change computer name for a TFS Workspace
18
How can I add the VS Command Prompt to Visual Studio 2010 C# Express?
6
While creating new project I am getting error "object reference not set to an instance of an object"
3
Adding Native Tools Command Prompt on VS2015 RC
2
No MVC 5 Template in Visual Studio 2013
6
How to compile Boost on Windows 10 with Visual Studio
2
Git - How to revert origin remote remove
See more linked questions

2713
What are the correct version numbers for C#?
1761
Command to collapse all sections of code?
404
Cannot import the keyfile 'blah.pfx' - error 'The keyfile may be password protected'
154
Where is the "Create Unit Tests" selection?
314
How to stop Visual Studio from opening a file on single click?
730
How to hide reference counts in VS2013?
209
External VS2013 build error "error MSB4019: The imported project <path> was not found"
217
How to add MVC5 to Visual Studio 2013?
1
Where is the developer command prompt for Visual Studio 2013 Express for Web?