In Docker, what's the difference between a container and an image? [duplicate]

Ask Question
Asked 8 years, 11 months ago
Modified 3 years, 10 months ago
Viewed 94k times
341
This question already has answers here:
What is the difference between a Docker image and a container? (31 answers)
Closed 3 years ago.

What's the difference between a container and an image in Docker? In the Get started with Docker tutorial these terms are both used, but I do not understand the difference.

Can anybody please shed some light?

Images are frozen immutable snapshots of live containers. Containers are running (or stopped) instances of some image.

Start with the base image called 'ubuntu'. Let's run bash interactively within the ubuntu image and create a file. We'll use the -i and -t flags to give us an interactive bash shell.

Don't expect that file to stick around when you exit and restart the image. You're restarting from exactly the same defined state as you started in before, not where you left off.

But, the container, now no longer running, has state and can be saved (committed) to an image.

Let's create an image from container ID 48cff2e9be75 where we created our file:

Now, we have a new image with our really important file:

Try the command docker images. You should see your new image ubuntu-foo listed along with the ubuntu standard image we started with.

An image is an ordered collection of root filesystem changes and the corresponding execution parameters for use within a container runtime. Images are read-only.

A container is an active (or inactive if exited) stateful instantiation of an image.

An object gets created only once when it is instantiated. Similarly, a container can be running or stopped. Containers are created out of an image, though this might not always be the case. The following example creates an Apache server image, runs the image, lists the images and then lists the containers:

An image is basically an immutable template for creating a container. It's easier to understand the difference between an image and container by considering what happens to an image to turn it into a container.

The Docker engine takes the image and adds a read-write filesystem on top, then initialises various settings. These settings include network options (IP, port, etc.), name, ID, and any resource limits (CPU, memory). If the Docker engine has been asked to run the container it will also initialise a process inside it. A container can be stopped and restarted, in which case it will retain all settings and filesystem changes (but will lose anything in memory and all processes will be restarted). For this reason a stopped or exited container is not the same as an image.

Docker Image is you get when you build docker file .

Docker Container is you get when you run your Docker image

We can get Docker Image from docker hub by pulling and then run it to get container . 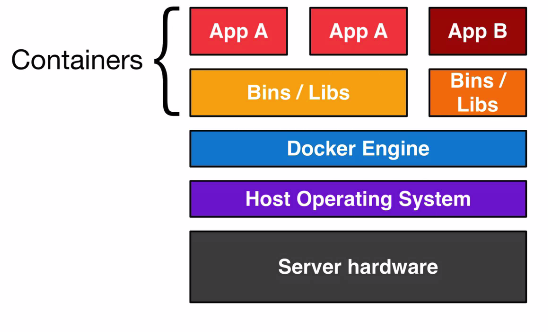 Use docker images to see the installed images and docker ps to see the running images. When you type docker run it takes the image, and makes it a living container with a running process. I tend to use:

Containers are based on images. An image needs to be passed to the Dockers run command.

Here we specify an image called busybox. Docker does not have this image locally and pulls it from a public registry.

A registry is a catalog of Docker images that the Docker client can communicate with and download image from. Once the image is pulled, Docker starts a container and execute the echo hello world command.

Images: The filesystem and metadata needed to run containers. They can be thought of as an application packaging format that includes all of the dependencies to run the application, and default settings to execute that application. The metadata includes defaults for the command to run, environment variables, labels, and healthcheck command.

Containers: An instance of an isolated application. A container needs the image to define its initial state and uses the read-only filesystem from the image along with a container specific read-write filesystem. A running container is a wrapper around a running process, giving that process namespaces for things like filesystem, network, and PIDs.

When you execute a docker run command, you provide an image on the command line, along with any configurations, and docker returns a container based off of that image definition and configurations you provided.

References: to the docker engine, an image is just an image id. This is a unique immutable hash. A change to an image results in creating a new image id. However, you can have one or more references pointing to an image id, not unlike symbolic links. And these references can be updated to point to new image id's. Note that when you create a container, docker will resolve that reference at the time of container creation, so you cannot update the image of a running container. Instead, you create a new image, and create a new container based on that new image.

Docker Images: It contains a list of commands and instruction on how to build and run a container. So basically Images contains all the data and metadata required to fire up a container(also called blueprint).We can't lunch a container without specifying Images.

The official difference is that the container is the last layer which is writable whereas the layers below are only readable and they belong to your image. The intuitive difference is that the docker instance is the instance virtualized by your docker daemon and the running your image, it operates within an isolated section of your kernel (this process is hidden from you). The image however is static, it doesn't run, it is just a pile of layers (static files). If we would relate this paradigm to object-oriented programming, the image is your class definition, whereas your docker instance is your class spawned object that resides in memory.

I have written a tutorial to reinforce your docker knowledge intuition:

Image is the photo made from your phone.
Container is the phone.

1203
What is the difference between a Docker image and a container?
454
Difference between Running and Starting a Docker container
9
How to push multiple images needed for docker-compose to GitLab registry in GitLab CI?
8
Pass ENV in docker run command
4
How to build an image of a project using docker-compose with Dockerfile?
3
Understanding docker from a layman point of view
0
is it possible recover the deleted docker image
1
Docker modify iptables of a single running container