The located assembly's manifest definition does not match the assembly reference

I am trying to run some unit tests in a C# Windows Forms application (Visual Studio 2005), and I get the following error:

System.IO.FileLoadException: Could not load file or assembly 'Utility, Version=1.2.0.200, Culture=neutral, PublicKeyToken=764d581291d764f7' or one of its dependencies. The located assembly's manifest definition does not match the assembly reference. (Exception from HRESULT: 0x80131040)**

System.IO.FileLoadException: Could not load file or assembly 'Utility, Version=1.2.0.203, Culture=neutral, PublicKeyToken=764d581291d764f7' or one of its dependencies. The located assembly's manifest definition does not match the assembly reference. (Exception from HRESULT: 0x80131040)

Any suggestions on how I figure out what is trying to reference this old version of this DLL file?

Besides, I don't think I even have this old assembly on my hard drive. Is there any tool to search for this old versioned assembly?

This assembly does not match what was requested and therefore you get this error.

In simple words, it can't find the assembly that was referenced. Make sure it can find the right assembly by putting it in the GAC or in the application path. Also see https://docs.microsoft.com/archive/blogs/junfeng/the-located-assemblys-manifest-definition-with-name-xxx-dll-does-not-match-the-assembly-reference.

You can do a couple of things to troubleshoot this issue. First, use Windows file search to search your hard drive for your assembly (.dll). Once you have a list of results, do View->Choose Details... and then check "File Version". This will display the version number in the list of results, so you can see where the old version might be coming from.

Also, like Lars said, check your GAC to see what version is listed there. This Microsoft article states that assemblies found in the GAC are not copied locally during a build, so you might need to remove the old version before doing a rebuild all. (See my answer to this question for notes on creating a batch file to do this for you)

If you still can't figure out where the old version is coming from, you can use the fuslogvw.exe application that ships with Visual Studio to get more information about the binding failures. Microsoft has information about this tool here. Note that you'll have to enable logging by setting the HKEY_LOCAL_MACHINE\SOFTWARE\Microsoft\Fusion\EnableLog registry key to 1.

I just ran into this problem myself, and I found that the issue was something different than what the others have run into.

I had two DLLs that my main project was referencing: CompanyClasses.dll and CompanyControls.dll. I was getting a run-time error saying:

Could not load file or assembly 'CompanyClasses, Version=1.4.1.0, Culture=neutral, PublicKeyToken=045746ba8544160c' or one of its dependencies. The located assembly's manifest definition does not match the assembly reference

The following redirects any assembly version to version 3.1.0.0. We have a script that will always update this reference in the App.config so we never have to deal with this issue again.

Through reflection you can get the assembly publicKeyToken and generate this block from the .dll file itself.

Note that without an XML namespace attribute (xmlns) this will not work.

If you are using Visual Studio, try "clean solution" and then rebuild your project.

The other answers wouldn't work for me. If you don't care about the version and you just want your app to run then right click on the reference and set 'specific version' to false...This worked for me. 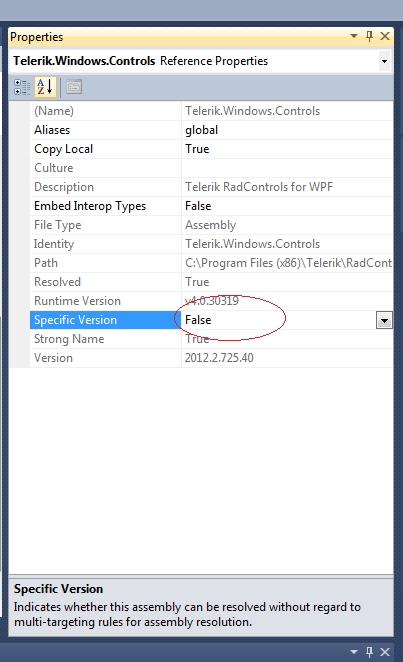 I am going to blow everyone's mind right now . . .

Delete all the <assemblyBinding> references from your .config file, and then run this command from the NuGet Package Manager console:

In my case, this error occurred while running an ASP.NET application. The solution was to:

Clean didn't work, rebuild didn't work, all references were fine, but it wasn't writing one of the libraries. After deleting those directories, everything worked perfectly.

I added a NuGet package, only to realize a black-box portion of my application was referencing an older version of the library.

I removed the package and referenced the older version's static DLL file, but the web.config file was never updated from:

to what it should have reverted to when I uninstalled the package:

I just ran across this issue and the problem was I had an old copy of the .dll in my application debug directory. You might want to also check there (instead of the GAC) to see if you see it.

For us, the problem was caused by something else. The license file for the DevExpress components included two lines, one for an old version of the components that was not installed on this particular computer. Removing the older version from the license file solved the issue.

The annoying part is that the error message gave no indication to what reference was causing the problems.

I would like to just add that I was creating a basic ASP.NET MVC 4 project and added DotNetOpenAuth.AspNet via NuGet. This resulted in the same error after I referenced a mismatching DLL file for Microsoft.Web.WebPages.OAuth.

To fix it I did a Update-Package and cleaned the solution for a full rebuild.

That worked for me and is kind of a lazy way, but time is money:-P

This exact same error is thrown if you try to late bind using reflection, if the assembly you are binding to gets strong-named or has its public-key token changed. The error is the same even though there is not actually any assembly found with the specified public key token.

You need to add the correct public key token (you can get it using sn -T on the dll) to resolve the error. Hope this helps.

Is possible you have a wrong nugget versions in assemblyBinding try:

My issue was copying source code to a new machine without pulling over any of the referenced assemblies.

Nothing that I did fixed the error, so in haste, I deleted the BIN directory altogether. Rebuilt my source code, and it worked from then on out.

Mine was a very similar situation to the post by Nathan Bedford but with a slight twist. My project too referenced the changed dll in two ways. 1) Directly and 2) Indirectly by referencing a component (class library) that itself had a reference to the changed dll. Now my Visual studio project for the component(2) referenced the correct version of the changed dll. However the version number of the compnent itself was NOT changed. And as a result the install of the new version of the project failed to replace that component on the client machine.

End result: Direct reference (1) and Indirect reference(2) were pointing to different versions of the changed dll at the client machine. On my dev machine it worked fine.

Resolution: Remove application; Delete all the DLLS from application folder; Re-install.Simple as that in my case.

I got this error while building on Team Foundation Server's build-service. It turned out I had multiple projects in my solution using different versions of the same library added with NuGet. I removed all old versions with NuGet and added the new one as reference for all.

Team Foundation Server puts all DLL files in one directory, and there can only be one DLL file of a certain name at a time of course.

I'll let someone benefit from my shear stupidity. I have some dependencies to a completely separate application (let's call this App1). The dll's from that App1 are pulled into my new application (App2). Any time I do updates in APP1, I have to create new dll's and copy them into App2. Well. . .I got tired of copying and pasting between 2 different App1 versions, so I simply added a 'NEW_' prefix to the dll's.

Well. . . I'm guessing that the build process scans the /bin folder and when it matches something up incorrectly, it barfs with the same error message as noted above. I deleted my "new_" versions and it built just dandy.

My app.config contains a

for npgsql. Somehow on the user's machine, my app.exe.config went missing. I am not sure if it was a silly user, installer glitch, or wacked out anti-virus yet. Replacing the file solved the issue.

After trying many of the above solutions with no fix, it came down to making sure 'Auto-generate binding redirects' was turned on within your application in Visual Studio.

I just found another reason why to get this error. I cleaned my GAC from all versions of a specific library and built my project with reference to specific version deployed together with the executable. When I run the project I got this exception searching for a newer version of the library.

To me the code coverage configuration in the "Local.testtesttings" file "caused" the problem. I forgot to update the files that were referenced there.

Just deleting contents of your project's bin folder and rebuild the solution solved my problem.

A general answer to this kind of issue is to use binding redirects as in other answers. However, that's only part of the problem - you need to know the correct version of the assembly file that you're using. Windows properties is not always accurate and nuget is also not always accurate.

The only way to get correct version info is to analyse the file itself. One useful tool is dotPeek. The assembly name listed in dotPeek is always accurate in my experience.

So for example, the correct binding for this file is the following:

Windows explorer says the file is 4.6.26515.06, nuget says its a 5.0.0.0 file. dotPeek says it is 4.2.1.0 and that is the version that works correctly in our software. Also note that the public key and culture are important and dotPeek also show this information.

Here's my method of fixing this issue. 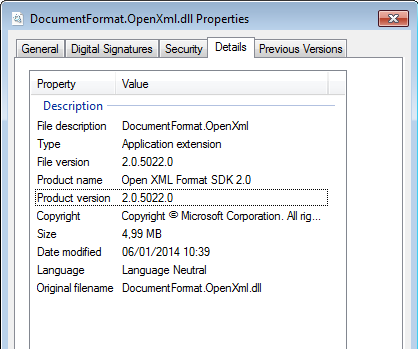 So, in this example, I would replace this...

The question has already an answer, but if the problem has occurred by NuGet package in different versions in the same solution, you can try the following.

Open NuGet Package Manager, as you see my service project version is different than others.

Then update projects that contain an old version of your package.

clean and rebuild the solution might not replace all the dll's from the output directory.

and then try build your silution again.

incase if you are using any third party dll's those you will need to copy into newly created "bin" or "obj" folder after successful build.

hope this will work for you.

No solution worked for me. I tried clean project solution, remove bin, update package, downgrade package and so on... After two hours I loaded default App.config from project with assemblies and there I changed wrong reference version from:

After this I cleaned project, build it again and it worked. No warning no problem.

This question is quite old, and I had the same error message recently with Azure DevOps Yaml pipelines and Dotnet Core 3.1. The problem was somewhat different than the other answers try to solve, so I will share my solution.

I had a solution with many projects for my own nuget packages. I had by accident added version-tag in the *.csproj files like this:

I packed the nuget packages for all projects using Yaml with a DotnetCoreCLI@2 task:

After removing all <Version>1.0.0</Version>-tags in the *.csproj files the assembly/fileversion for dll was automatically assigned by the environment-variable and both nuget and dll (assembly/fileversion) would have the same version and problem was solved.

Not the answer you're looking for? Browse other questions tagged c# reference compiler-errors dependencies version or ask your own question.