How do I remedy the “The breakpoint will not currently be hit. No symbols have been loaded for this document.” warning?

I tried the following.

I have two WinForms projects in the solution. One of them loads the debug info, one doesn't. They both refer to the assembly I'm trying to get debug info on in exactly the same way in the project file. Any ideas?

I want to add in here, mostly for myself when I come back to review this question, that symbols are not loaded until the assembly is loaded, and the assembly is not loaded until it is needed. If the breakpoint is in a library that is only used in one function in your main assembly, the symbols will not be loaded (and it will show the breakpoint as not being hit) until that function is called.

Start debugging, as soon as you've arrived at a breakpoint or used Debug > Break All, use Debug > Windows > Modules. You'll see a list of all the assemblies that are loaded into the process. Locate the one you want to get debug info for. Right-click it and select Symbol Load Information. You'll get a dialog that lists all the directories where it looked for the .pdb file for the assembly. Verify that list against the actual .pdb location. Make sure it doesn't find an old one.

In normal projects, the assembly and its .pdb file should always have been copied by the IDE into the same folder as your .exe. The bin\Debug folder of your project. Make sure you remove one from the GAC if you've been playing with it.

If that didn't work check this:

(step 6 generates the .pdb files, these are the debugging symbols)

Just something simple to try - you may have tried it already. Right click the Solution in solution explorer, click "clean solution", this deletes all the compiled and temporary files associated with a solution.

Do a rebuild of the solution and try to debug again.

I've also had troubles with breakpoints multiple projects in a solution - some compiled as x86, some as x64.

Disable the "Just My Code" option in the Debug/General settings.

Cross posting this fix from Hans K that I found on the similar thread >> HERE <<:

select Start action on the projects you need to debug.

The selected answer led me to fix my problem. But I need to do a few things more:

Even with "Debug" selected in the dropdown:

And in the project Properties > Build:

The Visual Studio was not loading symbols to a specific project. So in that dropdown I select "Configuration Manager" and saw that the settings to my web project was incorrect: 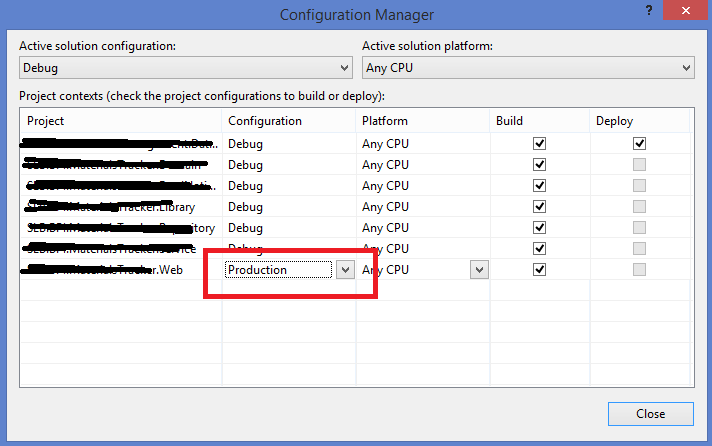 Then I set that to "Debug" and it started to generate the .pdb file. BUT I need to manually copy the PDB and DLL and put in the folder that VS was looking (here is where the selected answer helped me): 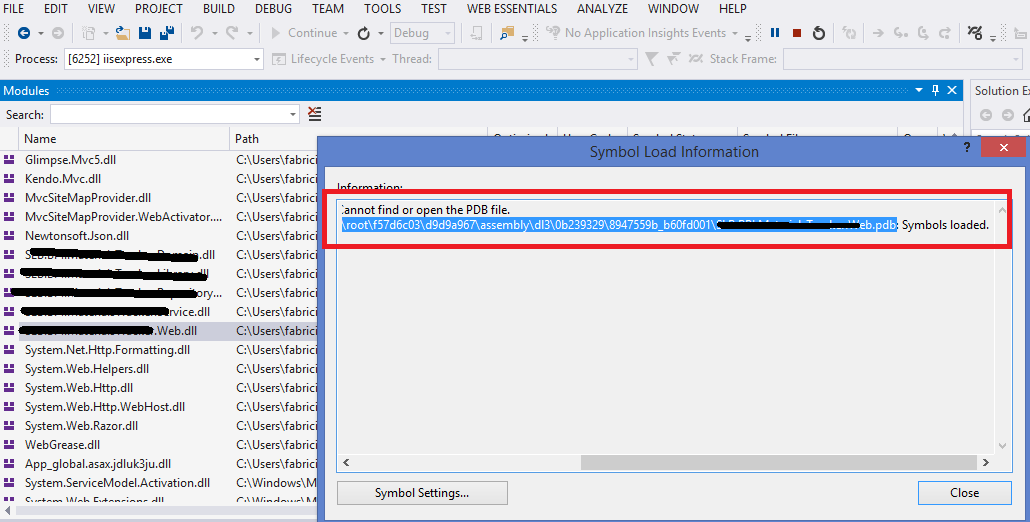 I was able to fix the error by simply setting the option in the 'Attach to Process' to 'Automatically determine the type of code to debug' option as shown in the attached screenshot. 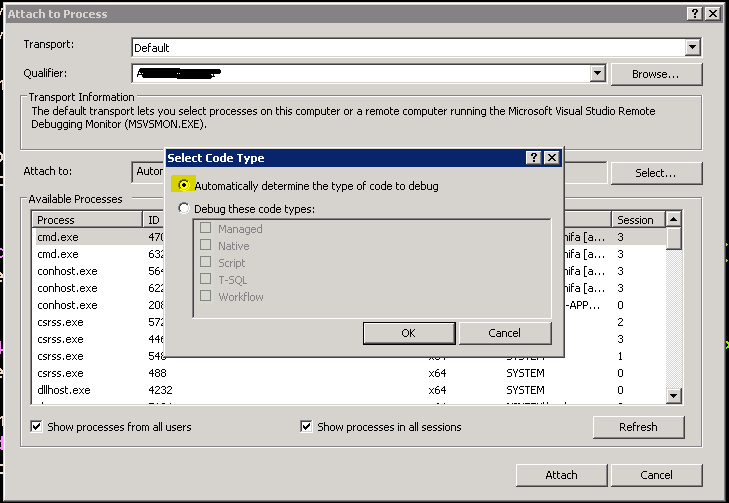 Debug > Windows > Modules to see what modules were being loaded put me in the right direction.

In my case IIS Express seemed to be loading a different DLL from the temporary ASP.NET files.

Sometimes, even though it gives you this error, the breakpoint still gets hit, so just ignore the error. This happens fairly often in the Views of an MVC web app.

Check if your .pbd file is missing in your bin/Debug folder. If it is then go to "Properties" of your project, selected "Build" and then "Advanced" at the bottom. Choose "full" under "Debug info" in the new window that appeared. This was my issue and solved it for me. 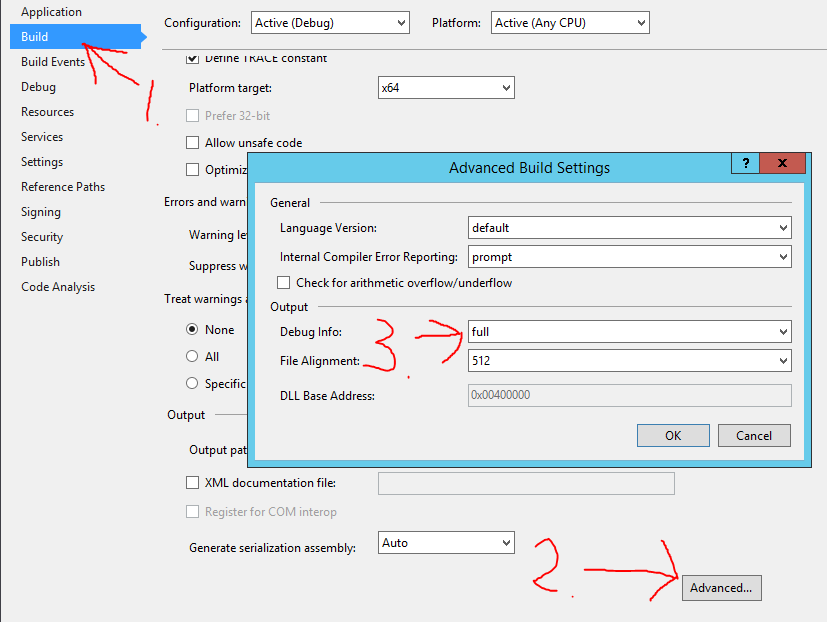 In my case "Optimize Code" was checked in my project properties. This caused VS to see my assembly as "not my code", and in turn, it did not load symbols for it.

The solution was to uncheck this.

Just Check whether your solution is in Release Mode.

Try running visual studio as an administrator within windows.

In my case i am trying to debug in relase mode. Once i change it to debug mode. Its working

You need to enable "Generate debug info" in compiler settings

We found the cause of our problem. This code was using the "CodeBehind" attribute in the Page directive of the .aspx file instead of the "CodeFile" attribute (ASP.NET 2.0 and beyond). After days of desperation, a simple search and replace solved the problem.

Check your Solution Configuration drop down list. Make sure you select Debug, not Release.

I tried everything mentioned above, but nothing worked. [Clean solution, and check for PDB files etc.]

Even publishing the same solution did not resolve the issue.

All I did was to make a deliberate change in code and publish the solution. Then I reverted the change and published again.

Voila [PDB files rid of evil spirits].. Not a smart resolution, but this did work.. :-|

None of those answers solved my problem. I tried another thing based on fact that the project with the stop wasn't in reality the loaded project. I found as Hans Passant wrote that the .dll where I want to stop debugger and the associoated .pdb files where copied near the .exe file. Those files have had an older date so I thought they wasn't updated in the runtime. I manually deleted them, Visual Studio create another pair AND put this new pair near the .exe. Now the breakpoins works !

Maybe Visual Studio cannot copy and REPLACE existing files (.dll and .pdb) near the .exe since there are another there. So if I deleted manually then VS could create new one near .exe.

I think that another changes (checks and so on - from the another answers) triggered something and Visual Studio copied and replaced the dll and pdb from the project folder to the folder near the exe, so that was a solution.

I think that the root cause of the problem is that the Visual Studio use another file in runtime, no the file from the project, with the stop.

Maybe this answer to help someone !

Things to check just to be clear: Make sure you have the configuration set to 'Debug' and not 'Release'. You can debug the startup project in 'Release' mode, but not a referenced class library.

Set to 'all' or 'pdb-only' then rebuild 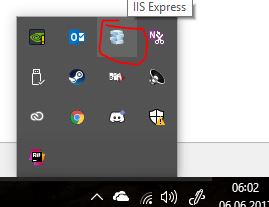 I had similar issue and I did the following: Debug=>Options=>General => Remove the check mark for "Enable Just My Code" This worked for me..

This took me a while tried other options above and for some strange reason debugging stopped working.

Instead of doing all these things just

the solution it will fix the issue

I know I'm years late, but I thought I'd done something wrong and followed the above steps then I realised I'd set the solution configuration to 'Release' by mistake :)

I was integrating a C# application with a static library using VS10 - which I'm new to. I wrote a managed code dll to interface them. I could set breakpoints everywhere but the static lib. I got the message described above - no symbols have been loaded for this document. I tried many of the suggestions above. I could see that the symbols weren't being loaded. I finally noticed a check box Configuration Debug, Enable unmanaged code debugging. That allowed me to set breakpoints in the static lib functions.

share|improve this answer
answered Apr 2 '12 at 16:19
community wiki
Kary
add a comment  |
1 2 3 4 next
Highly active question. Earn 10 reputation in order to answer this question. The reputation requirement helps protect this question from spam and non-answer activity.

Not the answer you're looking for? Browse other questions tagged c# .net visual-studio debugging breakpoints or ask your own question.