Difference between machine language, binary code and a binary file

I'm studying programming and in many sources I see the concepts: "machine language", "binary code" and "binary file". The distinction between these three is unclear to me, because according to my understanding machine language means the raw language that a computer can understand i.e. sequences of 0s and 1s.

What about binary file? What really is a binary file? To me the word "binary file" means a file, which consists of binary code. So for example, if my file was:

Would this be a binary file? If I google binary file and see Wikipedia I see this example picture of binary file which confuses me (it's not in binary?....) 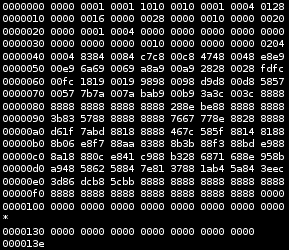 Where is my confusion happening? Am I mixing file encoding here or what? If I were to ask one to SHOW me what is machine language, binary code and binary file, what would they be? =) I guess the distinction is too abstract to me.

In Python for example, there is one phrase in a file I/O tutorial, which I don't understand: Opens a file for reading only in binary format. What does reading a file in binary format mean?

Machine code and binary are the same - a number system with base 2 - either a 1 or 0. But machine code can also be expressed in hex-format (hexadecimal) - a number system with base 16. The binary system and hex are very interrelated with each other, its easy to convert from binary to hex and convert back from hex to binary. And because hex is much more readable and useful than binary - it's often used and shown. For instance in the picture above in your question -uses hex-numbers!

One can agree that 9E0A is much more readable than the binary - and hex is what you see in the image.

I'm honestly surprised to not see the information I was looking for, looking back though, I guess the title of this thread isn't fully appropriate to the question the OP was asking.

You guys all say "Machine Code is a bunch of numbers".

Sure, the "CODE" is a bunch of numbers, but what people are wondering (I'm guessing) is "what actually is happening physically?"

I'm quite a novice when it comes to programming, but I understand enough to feel confident in 'roughly' answering this question.

Machine code, to the actual circuitry, isn't numbers or values. Machine code is a bunch of voltage gates that are either open or closed, and depending on what they're connected to, a certain light will flicker at a certain time etc.

I'm guessing that the "machine code" dictates the pathway and timing for specific electrical signals that will travel to reach their overall destination.

I know I'm close to the right answer here, but I also know it's much more sophisticated - because I can imagine that which I don't know.

010101 would be easy instructions for a simple circuit, but what I can't begin to fathom is how a complex computer processes all of the information.

So I guess let's break it down?

x-Bit-processors tell how many bits the processor can process at once.

A processor is an "integrated circuit", which is like a compact circuit board, containing resistors/capacitors/transistors and some memory. I'm not sure if processors have resistors but I know you'll usually find a ton of them located around the actual processor on the circuit board

So I imagine that as machine code goes... the segment of code the processor receives changes the voltage channels in such a way that it sends a signal to another part of the computer (why do you think processors have so many pins?), probably another integrated circuit more specialized to a specific task. That integrated circuit then receives a chunk of code, let's say 2 to 4 bits 01 or 1100 or something, which further defines where the final destination of the signal will end up, which might be straight back to the processor, or possibly to some output device.

Memory in a computer is highly necessary because otherwise to get your computer to do anything, you would need to type out everything (in machine code). Instead, all of the 1's and 0's are stored inside some storage device, either a spinning hard disk with a magnetic head pin that 'reads' 1's or 0's based on the charge of the disk, or a flash memory device that uses a series of transistors, where sending a voltage through elicits 1's and 0's (I'm not fully aware how flash memory works)

Fortunately, someone took the time to think up a different base number system for programming (hex), and a way to compile those numbers (translate them) back into binary. And then all software programs have branched out from there.

Each key on the keyboard creates a specific signal in binary that translates to a bunch of switches being turned on or off using certain voltages, so that a current could be run through the specific individual pixels on your screen that create "1" or "0" or "F", or all the characters of this post.

So I wonder, how does a program 'program', or 'make' the computer 'do' something... Rather, how does a compiler compile a program of a code different from binary? It's hard to think about now because I'm extremely tired (so I won't try) but also because EVERYTHING you do on a computer is because of some program. There are actively running programs (processes) in task manager. These keep your computer screen looking the way you've become accustomed, and also allow for the screen to be manipulated as if to say the pictures on the screen were real-life objects. (They aren't, they're just pictures, even your mouse cursor) (Ok I'm done. enough editing and elongating my thoughts, it's time for bed)

Also, what I don't really get is how 0's are 'read' by the computer. It seems that a '0' must not be a 'lack of voltage', rather, it must be some other type of signal Where perhaps something like 1 volt = 1, and 0.5 volts = 0. Some distinguishable difference between currents in a circuit that would still send a signal, but could be the difference between opening and closing a specific circuit.

If I'm close to right about any of this, serious props to the computer engineers of the world, the level of sophistication is mouthwatering. I hope to know everything about technology someday. For now I'm just trying to get through arduino.

Lastly... something I've wondered about... would it even be possible to program today's computers without the use of another computer?

Machine language is a low-level programming language that generally consists entirely of numbers. Because they are just numbers, they can be viewed in binary, octal, decimal, hexadecimal, or any other way. Dave4723 gave a more thorough explanation in his answer.

Binary code is basically any information represented by a sequence of 1s and 0s.

You have to understand how a computer works in its basic principles and this will clear things up for you... Therefore I recommend on reading into stuff like Neumann Architecture

Basically in a very simple computer you only have one memory like an array which has instructions for your processor, the data and everything is a binary numbers.

Your program starts at a certain place in your memory and reads the first number...

Example: the start address is 0

then it steps to address 1

"read value from address 121 into ALU"

then it steps to address 2

then it steps to address 3

"if ALU-Value is smaller than zero go to address 10"

You can write these instructions as numbers and they can be run by your processor but because nobody wants to do this work (that was what they did with punchcards in the 60s) assembler was invented... that looks like:

But everything else can be a Binary file, too.

In reality if you have a simple .exe file it is both... If you have variables in there like a = 10 and b = 20, these values can be stored some where between if clauses and for loops... It depends on the compiler where it put these

But if you have a complex 3D-model it can be stored in a separate file with no executable code in it...

I hope it helps to clear things up a little.

Not the answer you're looking for? Browse other questions tagged encoding binary or ask your own question.

527
What is the difference between UTF-8 and Unicode?
386
Reading binary file and looping over each byte
521
What is an application binary interface (ABI)?
91
binary protocols v. text protocols
287
Why do we use Base64?
9
Are there (have there been) any efforts to create a schema language for arbitrary binary formats?
247
How many bytes does one Unicode character take?
1
Various Types of “Code” (Machine, Binary etc)
0
How to write array of bytes to a binary file in Java